Phil Foden scored two goals as England finished their UEFA Nations League campaign on a positive note with a convincing 4-0 win over Iceland.

Defeat to Belgium on Sunday meant England could no longer progress from group A2, but Gareth Southgate’s line-up suggested this was a game he was keen to win.

Harry Kane, Harry Maguire and Kyle Walker all started at Wembley, while Foden made a return to the starting 11 for the first time since being sent home from a previous England camp for breaking coronavirus protocols.

And England dominated the early stages as Jack Grealish started brightly again after his eye-catching display at the weekend, creating half chances for both Mason Mount and Bukayo Saka.

But it was an unlikely scorer in Declan Rice who broke the deadlock in the 20th minute, guiding home Phil Foden’s free kick with a glancing header to score his first goal for the Three Lions.

That lead was doubled the lead just four minutes later when Mount pounced on a loose ball in the box before calmly stroking the ball past Iceland ‘keeper Ögmundur Kristinsson and into the bottom right corner.

Having already registered an assist, Foden nearly turned goalscorer in the 35th minute when his low shot from 25 yards looked to be heading into the bottom corner, only for the Kristinsson to turn it past the post.

A third goal before the break looked to be a certainty as the home side created opportunities at will, and Kane will be frustrated that he wasn’t able to get it after putting two efforts just wide of each post within the space of a minute. 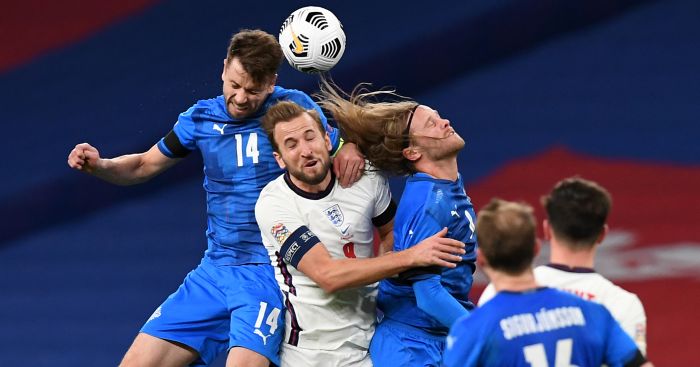 The Spurs striker also put a header wide in stoppage time at the end of the first half as Iceland, who lost all six of their group fixtures, managed to keep the deficit to two going into the interval.

The game feel back into a familiar rhythm almost as soon as the second half got underway with England controlling possession.

And things got even harder for Iceland when they were reduced to ten men as Birkir Már Saevarsson was shown a second yellow card for pulling back Saka as he looked to break into the box. Eric Dier hit the wall from the resulting free kick.

The visitors’ setback seemed to wake them a little and that led to their best chance of the match when Kári Árnason in space from a corner, but he was unable to guide his header inside the near post.

Iceland were unable to maintain any pressure though and England charged back down the other end to create a chance of their own, but Kane was denied again as his shot was blocked.

At the end of a week in which the Three Lions played three times, the intensity of the game dropped off somewhat in the final half an hour but England continued to press forward in search of a third.

It eventually arrived in the 80th minute as Foden netted his first of the night when he swept home Jadon Sancho’s tee-up with a first time finish.

The Manchester City midfielder then scored his second with a fine long range strike which found the bottom right corner.

The 20-year-old almost topped off his evening by setting Saka up for England’s fifth but the Arsenal man couldn’t direct his header on target.

However, the 4-0 win will have done plenty to raise England spirits at the conclusion of a disappointing Nations League campaign.