Former Manchester United goalkeeper Tim Howard believes the club have pulled out of a masterstroke by naming his old team-mate Ole Gunnar Solskjaer as manager as he has tapped right into the club’s psyche.

And Howard is backing the Norwegian to do the job for a number of years as he has given the current players a “new lease on life”, having recaptured the spirit of Sir Alex Ferguson’s all-conquering side.

Since replacing Jose Mourinho, United have won seven matches in a row, making the Norwegian the outstanding candidate to take the job on a permanent basis. A report last week claimed Solskjaer was now Ed Woodward’s No 1 contender to fill the role over the long term.

The Red Devils find themselves level on points with fifth-placed Arsenal ahead of Friday night’s FA Cup tie against the Gunners at the Emirates Stadium.

And it seems Neymar is also worried enough about United’s form to try and temper their expectations by issuing this warning.

American Howard played alongside Solskjaer during his three seasons at Old Trafford and they won the 2004 FA Cup together and he sees no reason why the interim boss cannot do the job on a permanent basis.

The 39-year-old Howard, who moved to Everton before eventually returning to the United States in 2016, believes Solskjaer has tapped right into the United psyche.

“You always want to see Manchester United up there, it is where they deserve to be,” Howard told Press Association Sport on Tuesday after announcing this season would be his last in Major League Soccer with the Colorado Rapids.

“Obviously with Ole Gunnar coming in and playing a style that is very familiar to him and echoing some of Sir Alex Ferguson’s thoughts in terms of playing forward, passing forward, wearing teams into the ground and being aggressive.

“You can see that they have the players to do that and they just kind of needed the shackle to come off. Ole Gunnar has given them that new lease on life.”

Solskjaer, meanwhile, has moved to deny suggestions that United’s revival is, in part, down to the influence of legendary manager Ferguson. 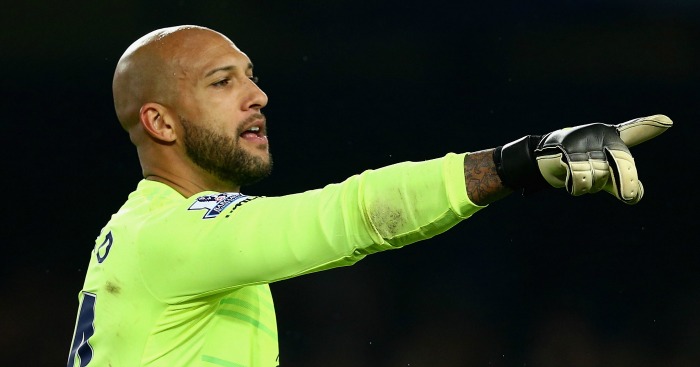 Howard insists it would take “possibly more money than in the US Treasury” to lure him into coaching once he finally hangs up his gloves.

The American, though, is looking forward to spending more time across the Atlantic as part of the consortium alongside New York Yankees shareholder Peter Freund which last year completed a takeover at Vanarama National League club Dagenham & Redbridge.

“The idea is to be over in London way more often than once a year, which is all my time allows right now,” said Howard, who will also step up his media duties when the MLS campaign ends.

“Being over there two weeks ago, I was excited to meet everybody and be the part of it, see the game.

“I think that is the only way ownership works, if you are hands on and you can sense, to get a feel for what the team and the club need.”

Howard and his consortium are relishing the challenges ahead as they plot the rebuilding process at Victoria Road.

“What excites us is going to Salford twice on the bounce, beating them once (in the league) and then in the FA Trophy, not being very far off. I saw that game and we played them tough,” said Howard, who won some 121 caps for the United States national team.

“They are at the top of that league, so our ambition is to get out of the Conference and back into the Football League.

“Once we can get ourselves solidified in League Two, that is where you can get some pretty major signings and some really good loan moves in, so we are excited to take this club forward.”

The post Former Man Utd keeper explains why Solskjaer can do job for years appeared first on teamtalk.com.