Luuk de Jong has insisted he was primed to play his part in a sixth Europa League triumph for Sevilla after helping them see off Inter Milan.

The former Borussia Monchengladbach and Newcastle striker reprised his heroics when, after his winner had dumped Manchester United out of the competition at the semi-final stage, he scored twice in the Spaniards’ 3-2 final victory over Antonio Conte’s men in Cologne.

De Jong told BT Sport: “It’s incredible. We’ve had such tough games all tournament, but we have played so well as a team. You could see it during the tournament, we were really a team, like a family.

“We worked together and it didn’t matter who played, who came on the pitch. Everybody was working for each other and you could see it also in this last game.

“It was tough. We started well, but out of nothing they scored a goal because of the penalty. But then I could score two headers. It’s an amazing feeling for me and luckily at the end, we could win the game.”

De Jong, who had scored only eight goals all season before the LaLiga outfit arrived in Germany, came off the bench against United but was included from the start against Inter and manager Julen Lopetegui’s faith was richly rewarded.

He cancelled out Romelu Lukaku’s fifth-minute penalty with a diving header and then powered home an Ever Banega free-kick to make it 2-1, although it was Lukaku’s own goal which eventually won it for Sevilla after Diego Godin had levelled.

Asked when he was told he would be playing, De Jong said: “This morning, he [Lopetegui] told me. But I told him – like I told him for the other games – that I’m always ready when he needs me. And today it worked really well for me.

“I think it’s my speciality. The first cross from (Jesus) Navas was perfect. I anticipated at the first post and it went in, and then the second one, a great cross from Banega and these headers are really special when you can put them in at the second post, and it went in perfectly.” 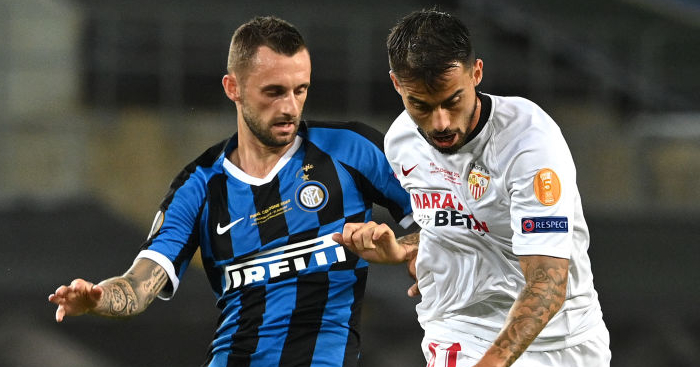 Lopetegui, who was sacked by both Spain and Real Madrid before taking over at the Ramon Sanchez-Pizjuan Stadium, was delighted to have secured the first trophy of his reign.

Asked how special it felt, he said: “It’s very special to win a cup and this moment, for me, for all the club, for our fans, is very special. We are very happy because we have worked very hard and then we have a happy ending.”

Commenting on De Jong’s contribution, he added: “Luuk is a very good player. He was waiting for his moment and he arrived at the right moment.”

Inter keeper Samir Handanovic vowed he and his team-mates would bounce back from their disappointment on a night when Carlos might have been sent off for the challenge which led to the early penalty.

Handanovic told www.uefa.com: “We are very disappointed but we have to move on. We just hope to play many other important games like this in the future. The foundation is there.

“Next season we will restart from a good foundation. Tonight we did not do exactly what we planned. It’s a pity but I congratulate Sevilla, they are a very good team and they proved it once again.

“We have to move on. You can learn a lot from defeats.”

The post Former Newcastle star was ready to be the hero after Sevilla win appeared first on teamtalk.com.