Olivier Giroud says talk of an exit from Chelsea may return in January, but he is “convinced” he can still make an impact at Stamford Bridge.

The French striker has fallen down the pecking order at Chelsea following the arrival of Timo Werner.

However, Giroud started last season out of favour as well, with Tammy Abraham preferred to him, before returning to make an impact in the second part of the campaign.

When the summer transfer window was still open, Giroud regularly denied that he was looking to leave Chelsea.

There were rumours of a potential move to Italy after a potential Serie A switch had fallen through in January, but the 34-year-old denied any contact with Juventus.

Chances of first team football for Giroud at Chelsea look like they will be hard to come by again in the first few months of this season, but he remains confident of proving himself again.

While on international duty with France, he said (via Goal): “I’ve written a book called ‘Always Believe It’ so I’m not going to go anywhere without a fight.

“There is competition but I will fight and we saw the rewards of that at the end of last season.

“I am convinced that I have a role to play at Chelsea. We will see in January.”

Giroud’s contract at Stamford Bridge will expire next summer.

Giroud proud to be close to 100th cap 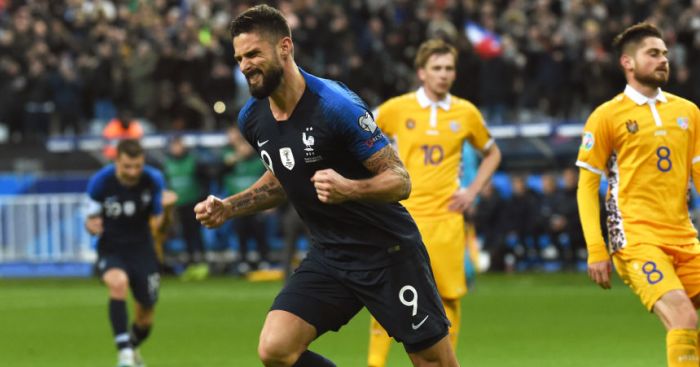 During the international break, Giroud will make his 100th cap for the French national team.

France have three games to play before club action resumes – one friendly and two UEFA Nations League fixtures – and coach Didier Deschamps has confirmed Giroud will feature at some stage.

It will be a major achievement for the striker, who only made his international debut nine years ago but needs just one more goal to match Michel Platini as his nation’s all-time second highest scorer, behind Thierry Henry.

And Giroud was proud when reflecting on his late blossoming journey.

“I signed in Ligue 1 at 25, it’s an atypical course,” he said. “The chance to play for Les Bleus at that age was just a bonus.

“If someone told me I was going to reach a centenary at 34, I wouldn’t have believed it when I was at Grenoble or Tours.

“But, that’s the beauty of football. I have always worked my way up through the ranks one after the other, thanks to great people.

“I am a good example for young people who do not turn professional at 17.

“My goal is to match him [Platini] as quickly as possible, to become the second-best scorer in history and it would be a privilege and an honour to match such a legend of French football.”

The post Giroud ‘convinced’ he still has Chelsea future, but hints at January decision appeared first on teamtalk.com.