Pep Guardiola insists there is still plenty of mileage left in Manchester City’s Premier League title defence despite seeing leaders Liverpool handed a sizeable advantage by his side’s slip up at Newcastle.

The Reds will establish a seven-point lead at the top of the table if they beat Leicester at Anfield on Wednesday evening, 24 hours after City went down 2-1 at St James’ Park.

That would represent a significant advantage with just 14 games left to play, but Guardiola has told Jurgen Klopp’s men not to take anything for granted.

“Well, it’s a lot of points if they go on to win, but we are in January, it’s not April or May. There are still many games and anything can happen,” he said.

“A lot of teams are playing many reasons, teams to stay in the Premier League, others to go to the Europa League, for the Champions League.

“In our case, every game, we have to do our best to be there, try to not give up, move forward and try another time and another time.

“We are in January and there’s a lot of time. But of course, when you are behind the leader, you don’t have to drop points because you help them and of course, every game is one less.

“But we are in January, so we have a lot of titles and games still to play,” insisted Guardiola, who also bemoaned City’s lack of rhythm at St James’ Park.

City’s night started in promising fashion when Sergio Aguero fired them into the lead with just 25 seconds on the clock, but although they dominated much of what followed, they were unable to increase their lead.

They were made to pay in the 66th minute when Salomon Rondon fired the Magpies level from close range, and things got worse for the visitors 10 minutes from time when Fernandinho felled Sean Longstaff inside the penalty area and Matt Ritchie won it from the spot. 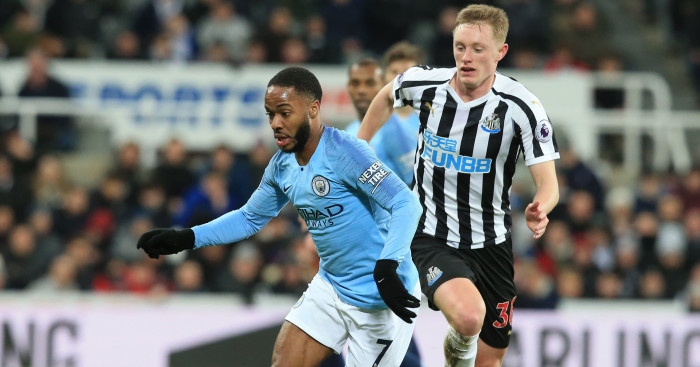 Guardiola was left to bemoan a missed opportunity, but backed his players to bounce back from a disappointing evening.

He added: “I love these players. All the prestige I have here in England, they gave it to me, so all I want to do is be here to try to help them.

“I know how they feel right now and I am beside them, close to them. It’s an incredible group of players, group of guys. It sometimes happens.”

Get the latest personalised City products on our new TEAMtalk Manchester City shop!

The post Guardiola issues defiant message to Liverpool as he shows City stars the love appeared first on teamtalk.com.