Jurgen Klopp has been impressed with how Joe Gomez has stepped up to the plate to fill the void left by big-name Liverpool absentees.

Injuries to Virgil Van Dijk, Joel Matip and Fabinho left the 23-year-old as the Reds’ only recognised first-team centre-back.

The former Charlton man has been excellent at the heart of the rearguard, starting five Premier League games for the Reds. The England star has also helped guide inexperienced pair Rhys Williams and Nat Phillips through matches.

Since losing Van Dijk in the Merseyside derby on October 17, Klopp’s side have conceded just two goals in five matches. One of those was a penalty and the back four seem to have shrugged off the loss of their main man.

Gomez will make his 100th league appearance at Manchester City on Sunday and Klopp believes he still has more to offer.

“He’s still young, so impressive number, impressive boy. Very good, very good,” he said. “He came here before me, so he’s here even longer than me. He played left-back, he played right-back, when Brendan (Rodgers) played with three in the back, different positions.

“How many different partners? He played together with Kolo Toure, Mamadou Sakho, Martin Skrtel, all these guys, then Dejan Lovren, Virgil Van Dijk, Joel Matip.

“So he had so many different partners but he was always the kid in the line pretty much and that changed now obviously completely.”

There was a collective groan around Anfield when Van Dijk’s injury struck. Questions remained about whether they would be able to cope with the loss of such an important player.

Back-to-back victories see the Merseysiders second but with a chance to usurp surprise leaders Southampton this weekend.

Klopp believes the most impressive aspect of Gomez’s rise has been the way in which he has adapted so quickly.

“And how everybody (has to) in life, we have to grow in situations like this and he did that,” he added. “He used the last few weeks obviously, pretty much thrown in cold water if you want, and used it really well.

“(He) did really well and I’m really happy about the performances he put in. Very important for us obviously.” 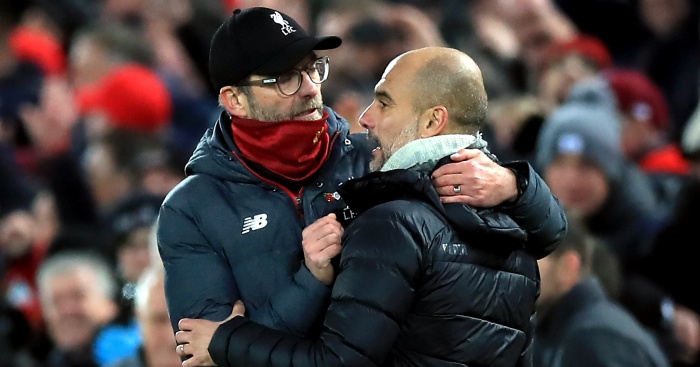 Matip may well be back for the short trip to the Etihad after missing five matches. He was an unused substitute in the midweek Champions League win over Atalanta after returning to fitness.

It would be another bonus for the champions who have now put their 7-2 drubbing by Aston Villa to bed.