Jurgen Klopp is keen to make sure a Champions League semi-final against Barcelona does not become a distraction for his Liverpool players with crucial Premier League games coming up.

Sadio Mane, Mohamed Salah, Roberto Firminho and Virgil van Dijk were on the scoresheet as Wednesday’s 4-1 win in Porto secured a last-four meeting between the Premier League leaders and LaLiga’s top side.

The mouth-watering clash is in danger of making Liverpool’s upcoming fixtures against Cardiff and Huddersfield look a little mundane by comparison.

But with the Premier League title race against Manchester City as tight as ever, Klopp knows they must stay focused.

Asked how his side might stop Lionel Messi and all, the German smiled.

“Everybody tries to do it and nobody can do it. We are looking forward to it but we have so many jobs to do before we play Barcelona.

“First let’s play these games and then we will play Barcelona and we will see.

“We play on Sunday against Cardiff that’s in my mind, not how we play against Barcelona. We have enough time for that.”

Klopp promised to wake up on Thursday with Sunday’s game at Cardiff at the forefront of his mind.

“We have three days now to recover,” he said. “We must be ready for another intense football game.

“Cardiff are now back in the race with the result (at Brighton) so I don’t think it will be any less intense than tonight. So that’s the next job.” 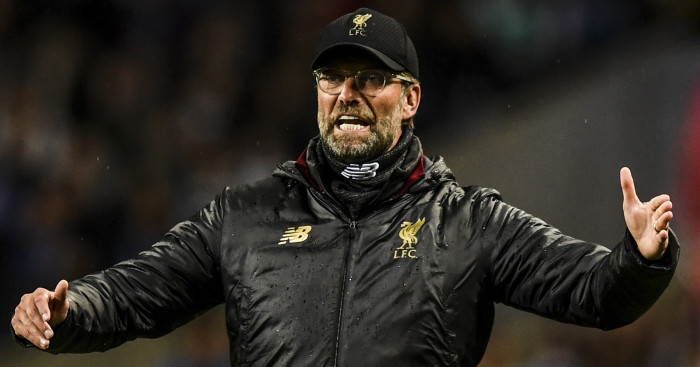 Klopp’s side came through the game at the Estadio do Dragao without any fresh injury troubles, while there was the welcome sight of Joe Gomez making his first appearance since December following a leg fracture.

Divock Origi made his first European start in three years in attack with Roberto Firminho rested, though the Brazilian was called on to replace Origi at half-time and soon made his mark.

“We defended as a unit in the first line not too good, we had to change it at half-time,” Klopp said.

“But it was nothing about Divock. In training he is in unbelievable shape. How the game developed was perhaps not the most thankful game for a striker. That’s all.”

The post Klopp in humorous response when asked how Liverpool will stop Messi appeared first on teamtalk.com.