Ousmane Dembele has rejected any chance of leaving Barcelona before the window shuts after reportedly receiving assurances from Ronald Koeman.

With finances tight at the Nou Camp, the World Cup winner was seen as a disposable commodity at Barca.

It was reported Dembele had been put up for sale and would be allowed to leave if a suitable offer came in.

Manchester United had been mentioned as suitors as they search for a new right winger. Efforts for Jadon Sancho have, thus far, proved unfruitful.

As such, a report earlier this week claimed United officials have held promising talks with Barcelona counterparts over a deal.

As per the report, United have asked Barca about the possibility of taking Dembele on a season-long loan. Barcelona, however, would prefer a cash sale and are said to value Dembele at around €80m.

Given his injury record over the past three seasons, United were said to prefer to take him on an initial loan. As such, the Daily Record claimed a compromise deal was set to be reached. To that end, it’s reported Barcelona have proposed to United the prospect of Dembele signing on loan with an obligation to buy next summer.

Liverpool, meanwhile, have frequently been linked with the Barcelona star, who previously played for Jurgen Klopp’s old club, Borussia Dortmund.

Back in June it was claimed Liverpool had spoken with his agent over a potential deal.

That interest is obviously likely to have waned following their capture of Diogo Jota from Wolves. He looks set to make his debut against Lincoln in the EFL Cup on Thursday.

However, it seems Barcelona have had a change of heart over Dembele’s sale anyway.

The winger is reported to have held talks with Koeman over his future and has been assured of his future. Furthermore, Koeman is reported by Fabrizio Romano that he will have the chance to prove himself this season. 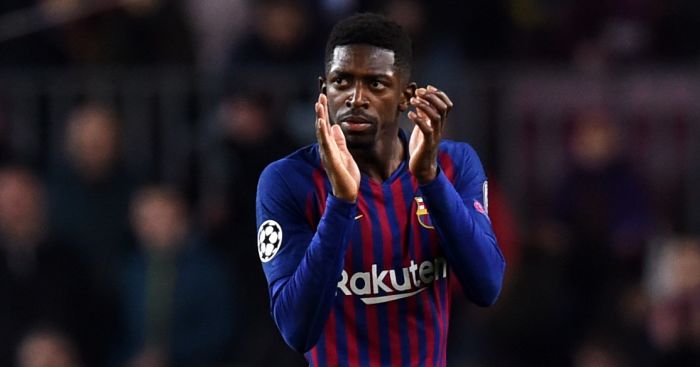 Speaking on the ‘Here We Go Podcast‘, Romano claims Dembele has made it clear to both United and Liverpool that he wants to remain at Barcelona.

Romano claims that Klopp was ‘convinced’ that Liverpool could agree a loan deal with Barcelona. That would have included an option to buy. However, he states Dembele wants to spend another season at Camp Nou.

Dembele’s issues at the Nou Camp are believed to have stemmed from a succession of niggling injuries.

In response, Barcelona’s medical staff have constructed a tailored plan in order to minimise the winger’s risk of suffering another injury setback. That, according to Romano, has given Dembele reason to stay and will see him rebuff any offers to leave.