Barcelona boss Ronald Koeman has reportedly urged the club to act with urgency to beat Liverpool and Tottenham to a bargain defensive target.

Jurgen Klopp’s side have been tipped to dip into the January market after injuries to Virgil van Dijk and Joe Gomez.

RB Leipzig star Dayot Upamecano was touted as a potential target, along with Schalke defender Ozan Kabak. But with both those deals unlikely, the Reds have seemingly switched targets to France.

The Anfield outfit are instead reportedly set to take advantage of Lille’s dire financial situation and strike a deal for Sven Botman.

The Ligue 1 outfit have major issues off the pitch. As such, they are apparently ready to let go of some of their key players.

Indeed, Foot Mercato claimed Liverpool have already been in contact with Botman’s representatives.

While Liverpool are yet to make an approach to Lille, it has since been claimed that Tottenham are also readying an approach.

“I can tell you that in addition to the interest from Liverpool, Jose Mourinho likes Botman as a player,” Duncan Castles told the Transfer Window podcast.

“We’ve told you previously that Mourinho has targeted two positions in his side for improvement and is asking the club to fund purchases in those areas.

“One is a box-to-box midfielder, which he is prioritising, and the other is a left-sided quick centre-back, left-footed centre-back, which is what Botman is.”

Castles went on to explain that Spurs were unlikely to make a firm approach for Botman until the summer.

They claim that Koeman is desperate to bring in another central defender this summer. The Barca boss has Manchester City’s Eric Garcia in his sights. However, City are reluctant to sell this month, with any deal on hold until the summer. As such, Botman is now emerging as Koeman’s prefered choice.

They claim Koeman is a huge admirer of his countryman. Furthermore, his likely €10m asking price would not dissuade Barcelona from a deal and an approach could soon be made.

Barcelona, meanwhile, are being linked with an unlikely swoop for Erling Haaland.

A clause in his deal at Dortmund states he can leave the Westfallonstadion in 2022. 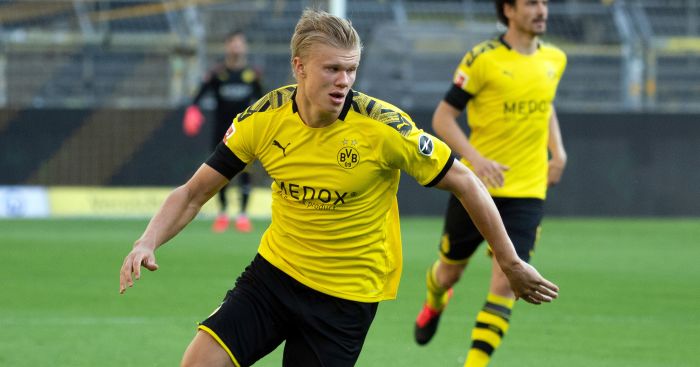 However, it’s reported Mino Raiola wants to move his client on this summer. Reports on Tuesday claimed Manchester United were ready to launch a huge nine-figure bid for the Norwegian hotshot.

Reports of his departure from the Westfallonstadion are also beginning to gather pace in Spain.

According to Cat Radio, Raiola is already working to move his client on. They surprisingly state that Barcelona are in the running to sign the striker. Presidential candidate Emili Roussaud has made it his priority to land Haaland.

His aide, Josep Maria Minguellsa told the station: “We know all the conditions and if we win, the following day I will call Mino Raiola and we will accept those conditions. I have already advised him of that.

“We have a world-class sports project that is not showing just now. Emili Rousaud has a plan that will turn this unfortunate situation (at Barcelona) around.”

READ MORE: Wijnaldum told he should not get away with greedy Liverpool deal demand