Arsenal reinvigorated their hopes of finishing in the Premier League’s top four with a deserved 2-0 victory over London rivals Chelsea.

Unai Emery had said on the eve of the game that a defeat at the Emirates Stadium, which would have left Arsenal nine points adrift of the fourth-placed Blues, would have meant the end of their top-four ambitions.

In truth, the hosts never looked like losing as they went at Chelsea from the off, sealing the win with first-half goals from Alexandre Lacazette and Laurent Koscielny.

Maurizio Sarri opted to set up his Chelsea side with Eden Hazard again playing at the main central attacking option and the visitors rarely threatened.

Mesut Ozil returned to the Arsenal squad having been dropped for the loss at West Ham, but Emery left the German on the bench – with a serious-looking knee injury to Hector Bellerin the only negative for the Gunners.

With Ole Gunnar Solskjaer’s resurgent Manchester United winning at home to Brighton earlier in the day, Arsenal kicked off down in sixth place.

They were lively in the early goings as Emery’s midfield diamond caused problems for the Chelsea defence, with Pierre-Emerick Aubameyang missing a fine chance to open the scoring as he fluffed his lines following a low Lacazette cross.

Sokratis Papastathopoulos was the next to go close for the hosts, missing a chance for his first Premier League goal after heading wide from a short corner routine.

When Arsenal did hit the target through a Koscielny header, it was up to Chelsea goalkeeper Kepa Arrizabalaga to make a superb reaction save to deny the fit-again skipper.

But there was nothing Kepa could do moments later as Lacazette deservedly put Arsenal in front with a vicious finish from Bellerin’s cross.

Arsenal maintained the momentum which led to their opening goal as Aubameyang stole the ball after a Cesar Azpilicueta slip – but he was closed down well before poking an effort at Kepa.

Chelsea finally responded as Pedro stole in behind the Arsenal defence to reach David Luiz’s pass and lob an effort over the onrushing Bernd Leno only to see the ball drop inches wide. 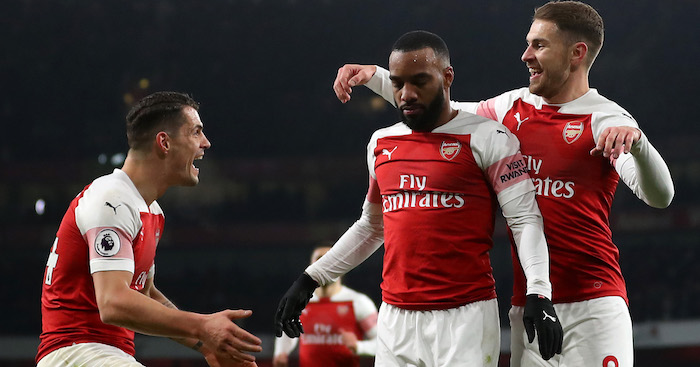 The Blues began to enjoy spells of possession and stemmed the flow of Arsenal attacks, only for Aubameyang to come close to doubling the lead as his acrobatic attempt from Sead Kolasinac’s cross flew past the post with Kepa well beaten.

The second goal came six minutes from half-time as a well-worked free-kick led to Sokratis firing the ball back into the box, where Koscielny had stayed onside to convert past Kepa off his shoulder for his first goal since last February.

Marcos Alonso headed against the post as Chelsea ended the half strongly, although it was Arsenal who went in ahead – just the third time Emery’s side have managed to do so in the league this season.

Chelsea picked up where they left off after the interval but, with no recognised striker on the pitch, their attacks were being mopped up by the Arsenal defence.

Pedro fired over and Alonso wide but Leno remained untested as the game entered the final 30 minutes – with Sarri turning to Ross Barkley, and then former Arsenal striker Olivier Giroud, in search of a goal.

Arsenal’s evening was tainted as Bellerin, starting for the first time since a calf injury, was carried off on a stretcher having gone down holding his knee.

Mohamed Elneny replaced the full-back as Arsenal’s final change after Emery had introduced Alex Iwobi and Ainsley Maitland-Niles – with his decision to substitute Lacazette again met with loud jeers from the home support – minutes before Bellerin’s injury.

Chelsea pushed further forward in the hope of a spectacular comeback but never came close to reducing the arrears as Arsenal returned to winning ways.

The post Lacazette and Koscielny net as Arsenal confidently brush aside Chelsea appeared first on teamtalk.com.