Leicester recovered from an early penalty miss by Kelechi Iheanacho to earn a 1-1 draw at Crystal Palace thanks to a late equaliser from Harvey Barnes.

After Vicente Guaita saved Iheanacho’s spot-kick, Wilfried Zaha volleyed Palace in front just before the hour mark. But Leicester’s perseverance was rewarded with seven minutes to go when Barnes skipped past several challenges before squeezing an effort home.

Scott Dann missed out completely and Joel Ward, Patrick Van Aanholt, James McArthur and Ebere Eze were named as substitutes after they started the 3-0 loss at Aston Villa.

Leicester boss Brendan Rodgers made seven changes due to the quick turnaround from Boxing Day’s 2-2 draw with Manchester United.

Jamie Vardy and Youri Tielemans were among those who dropped to the bench, but Kasper Schmeichel, James Justin, Jonny Evans and Harvey Barnes retained their starting places, while James Maddison was not involved.

Leicester forward Kelechi Iheanacho squandered the chance to open the scoring in the 19th minute when he had a spot-kick saved.

The returning Tomkins brought down Foxes defender Luke Thomas inside the area and referee Graham Scott awarded a penalty.

Iheanacho, without a Premier League goal this season, stepped up but was unable to beat Vicente Guaita who produced a fine save to his left.

It ensured the match at Selhurst Park remained goalless midway through the first half. 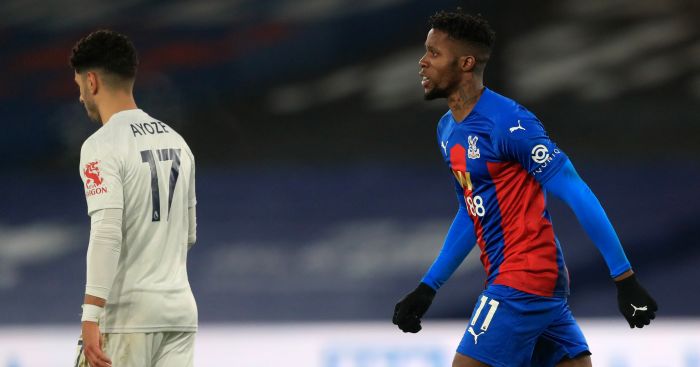 Crystal Palace started the second half with much better intent and got their reward in the 58th minute when Wilfried Zaha fired them ahead.

The Eagles talisman had been fouled in the build-up to the goal but picked himself off the floor after finding Andros Townsend.

With Townsend delivering a fine cross to the back post, Zaha was there unmarked and able to volley past Kasper Schmeichel for his eighth goal of the season.

After a dogged defensive display from the home team, they were breached in the 83rd minute when Barnes fired in from outside the area.

It set up a potentially frantic finale in SE25 with the Foxes looking to close the gap on leaders Liverpool with a win.

Ayoze Perez fired over at the death after being teed-up by James Justin in what was the fianl chance of a well-contested game.

The post Leicester bounce back from penalty miss to strike late in Palace draw appeared first on teamtalk.com.