RB Leipzig have made a final bid to keep Germany striker Timo Werner from out of the clutches of the likes of Liverpool.

The 22-year-old is being chased by Reds boss Jurgen Klopp, as well as Spanish giants Barcelona and Real Madrid and PSG, although reports on Thursday claimed that Liverpool were trying to push through a deal as quickly as possible to avoid Werner’s price going up.

The impressive attacker is entering the final 18 months of his contract at the Red Bull Arena and while Leipzig chief executive Oliver Mintzlaff wants him to commit to a new deal, negotiations have so far yielded very little progress.

However, German newspaper Bild is reporting that Leipzig have offered to double Werner’s wages with a whopping £5.2m a year contract.

This deal would include a premium £60m release clause, which applies to ten major European clubs.

Leipzig boss Ralf Rangnick has previously stated that he believes Werner could stay at Leipzig for the next two to three years, unless fellow Bundesliga giant ​Bayern Munich comes in with a serious offer. 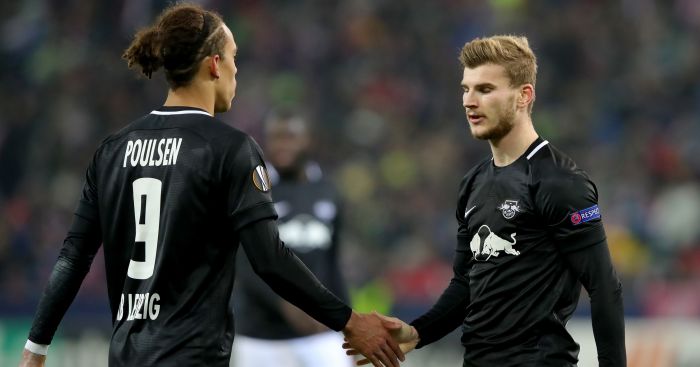 “If Bayern are serious, then it will be difficult for us,” said Rangnick. “But they often play with one striker, so I see him staying with us for the next two or three years.”

That statement does not appear to have put Klopp off, however, with Werner being lined up as a the final piece of the jigsaw for the Reds – an out and out striker to compliment the likes of Mo Salah, Sadio Mane and Roberto Firmino.

Liverpool striker Daniel Sturridge, meanwhile, insists he is not thinking about his own future with the team in the middle of a title challenge. Read the full story here…