The Reds are in Austria preparing for the defence of their maiden Premier League title.

As part of the pre-season camp, Klopp has had the chance to assess the younger talents in his squad. He brought 20-year-old striker Rhian Brewster along and openly spoke of his admiration for young centre-back Billy Koumetio.

According to Goal, however, another player who has made waves in Austria is former Villarreal goalkeeper Cendon.

The 19-year-old left Villarreal at the end of last season and has joined in first-team training on the trip. The source says the teenager has “impressed” members of staff.

One key coach who has taken a particular liking to Cendon, however, is goalkeeping coach John Achterberg.

As such, Goal adds Liverpool are considering offering the goalkeeper a contract. Should the Reds go through with their proposal, it is likely he will join up with the Under-23s squad. 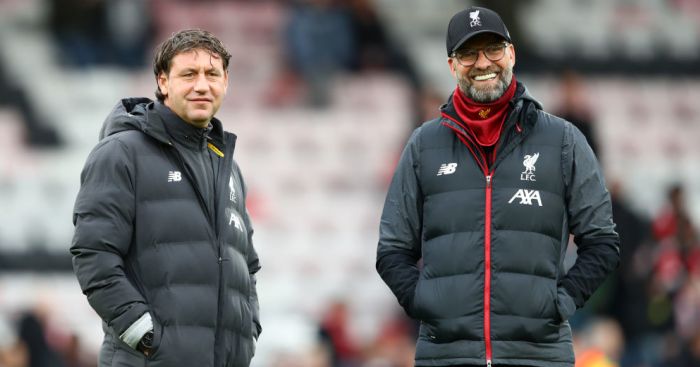 Indeed, Liverpool will continue to allow Cendon to train when the players travel back to Merseyside while they make their decision.

Klopp‘s men round off the trip to Austria with a friendly against RB Salzburg on Tuesday. The game is the second match scheduled, with Liverpool beating Stuttgart on Saturday.

Brewster scored the third goal in the weekend’s match, with Roberto Firmino and Naby Keita also on the scoresheet.

THIAGO TO ‘SET COURSE FOR LIVERPOOL’

The Spanish midfielder played a key role in his side’s victory over Paris Saint-Germain on Sunday.

While he still has the best part of a year left on his deal, he reportedly wants a new challenge.