Liverpool’s record goalscorer Ian Rush is not concerned by the lack of title-winning experience in Jurgen Klopp’s side as they seek to end a 29-year drought.

The Reds lead the Premier League by four points from Manchester City, who boast a number of multiple winners with the vast majority of their current squad integral to last season’s record-breaking league triumph.

By contrast Liverpool have just James Milner, coincidentally part of City’s successes in 2011-12 and 2013-14, as their only Premier League winner.

But Rush, who had the benefit when he signed for the club in 1980 of joining a squad which had already won league and European Cup titles, does not believe a lack of experience will be pivotal in this season’s title race.

“How do you get the experience if you haven’t won the title since 1990?” the 57-year-old former striker, who scored in the 2-1 win over QPR which secured Liverpool’s 18th and last top-flight title, told PA sport.

“It’s that long ago I actually played the last time Liverpool won the league, which shows how long it’s been.

“A lot comes from how the manager and coaches keep the players’ feet on the ground.

“I think supporters are quite right to be excited as they are in a position they haven’t been for a long time but players have to take each game as it comes.

“Beating Brighton was fantastic as it wasn’t a great game, against Crystal Palace they came back from being behind so I think everything is in a good position for Liverpool.” 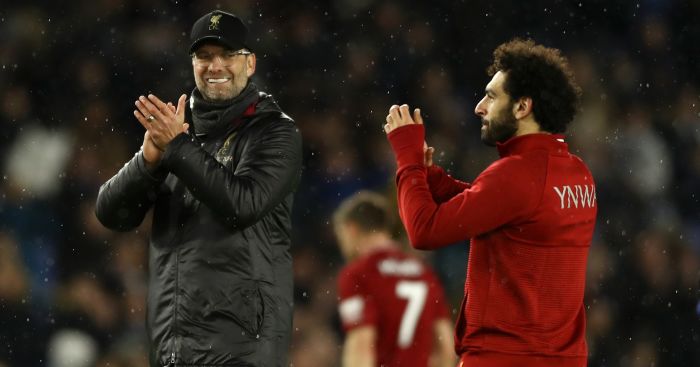 Rush, who is managing the Liverpool Legends side in a re-run of the 2005 and 2007 Champions League finals against Milan Glorie at Anfield on March 23 in aid of the Liverpool FC Foundation, believes there are a number of factors which can help end the long wait.

Defensively they are stronger than they have been for years, conceding just 13 goals conceded in 23 matches, while last year’s star performers Mohamed Salah (19 goals), Roberto Firmino (11) and Sadio Mane (10) continue to score with regularity, although not in the huge numbers they managed last season.

“It is no good scoring three goals if you let in four,” added Rush.

“I think they have tightened it up at the back. (Virgil) Van Dijk organises the defence and says ‘Leave those three (Salah, Firmino, Mane) up front to do what they want’.

“That’s what they used to do with myself and Kenny (Dalglish). We could do what we wanted while the rest organised.

“And with that front three scoring goals that puts you into a title-winning position.”

Salah is once again the Premier League’s leading scorer with 16, two better than Tottenham’s Harry Kane (now out for two months with injury) and Arsenal’s Pierre-Emerick Aubameyang.

He is unlikely to match his impressive tally of 32 league goals from last season but Rush, scorer of 346 for Liverpool, believes he has improved.

“Last season, for me, he was the best player in the world – and that’s a big statement,” he said.

“It was just unfortunate we didn’t win a trophy. If we had won a trophy I think he would have been player of the year worldwide.

“This year has been a bit different because teams are sussing him out and putting two players on him but I think he has overcome that now.

“He may not score as many goals – it was always going to be more difficult this year – but seems to be a better player and that is why he is the league’s top scorer.”

The post Liverpool legend has no concerns over missing factor in Klopp’s squad appeared first on teamtalk.com.