Liverpool have reported responded to claims that Real Madrid are planning to launch a bid to sign Sadio Mane by sticking a huge transfer fee on the Senegalese forward’s head.

Mane’s form for Liverpool this season has been nothing short of sensational and the Senegalese star has taken his game on to another level recently, having plundered an impressive 11 goals in his last 11 games – putting him joint-second, alongside teammate Mohamed Salah, in the race for the Premier League golden boot.

Mane had emerged as a target for Zinedine Zidane last year, with one report going as far to suggest the former Southampton star had even given a verbal agreement on a move to the Bernabeu.

However, Zidane’s departure shortly after steering Real to a third successive Champions League triumph saw their interest cool, with his replacement Julien Lopetegui prioritising other positions instead.

But Zidane’s return to the Bernabeu dugout has seen Mane’s name linked once again with a move to the LaLiga giants.

According to France Football, Zidane has put forward Mane’s name as one of three prime targets to sign this summer, with the coach urging Real president Florentino Perez to do whatever is required to prise the forward away from Liverpool.

Furthermore, Don Balon also claims that Barcelona are keen to sign the player, claiming that Lionel Messi is a huge fan of Mane’s talents and sees him as a perfect foil in their attack.

And with interest from both Barca and Real unlikely to go away any time soon, the Spanish outlet claims Liverpool have responded to the speculation by slapping a massive fee on Mane’s head, reportedly informing suitors they will demand a fee of €150m (£136.2m) if they want to secure his services.

They do, however, make clear that Liverpool have no interest in cashing in on the 26-year-old forward, who signed a new deal with the Merseysiders earlier in the season.

However, any approach for him would see the Reds demand a fee similar to the £142million that brought Philippe Coutinho to Barca from Liverpool in January 2018. 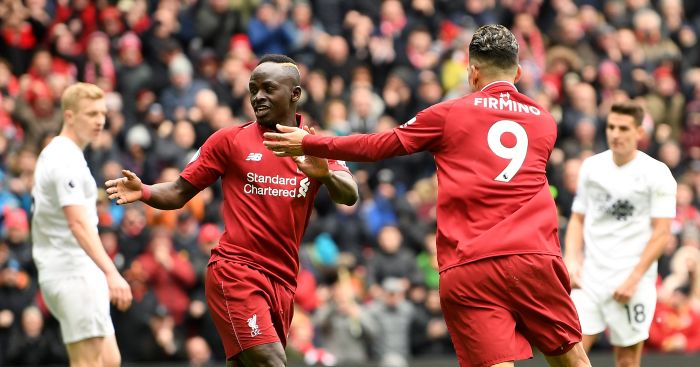 Mane addressed speculation linking him with Real earlier this year, when he said: “Speculation is part of football. You just learn to live with it and not to take it too seriously.

“All I can say is that my only concern is Liverpool. Mo, Bobby…it seemed like everyone was signing contracts and they were saying: ‘Hey Sadio, when are you going to sign?’. I said to each of them: ‘Don’t worry bro, I will sign’.

“And what did I do? I signed, so they are pleased now!

“I can’t wait to lift a trophy with Liverpool. I know the fans are desperate for us to win the Premier League.

“It would be an amazing moment for the club. It has been far too long for a team the size of Liverpool.

“We believe we are heading in the right direction, but there are some very tough rivals – City were unbelievable last season and very strong again – but why not?”