Fernando Llorente admits it is hard living in Harry Kane’s shadow but revelled in his “dream” winning goal for Tottenham against Watford.

Llorente has been thrust into the limelight at Spurs following Kane’s recent ankle injury and the Spaniard has experienced mixed fortunes across his four games in the side.

He scored an own goal at Fulham, but then bagged at the right end to send the Carabao Cup semi-final with Chelsea to penalties.

The 33-year-old then shrugged off a shocking miss against the Hornets, where he skied over from three yards, to score an 87th-minute header which gave Spurs a late comeback win.

They had trailed to Craig Cathcart’s opener before Son Heung-min provided a perfect homecoming present following international duty by levelling.

Llorente was making just his third Premier League start for the club in 18 months and accepts life at Spurs has been a struggle.

“It’s really difficult because Harry is one of the best in the world,” he said.

“The most difficult thing is to be fit when you don’t play because the only way to be fit is to play 90 minutes.

“Training is important but the game is the game. Now I feel every game, I feel much better. Today I feel good. Now I’m very focused to help the train and do my best.

“It is probably the most important goal I have scored here at Tottenham. It was my dream.

“When you dream of days like this and finally it happens, it’s amazing.

“Now I enjoy the moment because we haven’t got a lot of time to enjoy.” 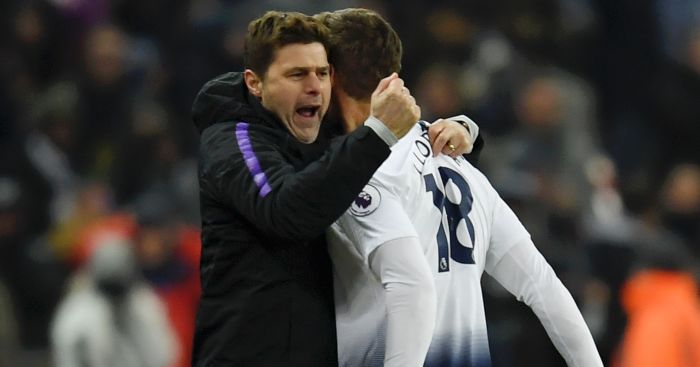 Despite hardly getting a look in under Mauricio Pochettino, Llorente has thanked his manager for having belief in him and says his winner was a gift.

“He’s massively important,” he said. “He gives you confidence. I think I need it, in this moment, to get confidence and to do my best.

“It’s difficult because in all my career I always played. I am a player who feels really good when I play but it’s really difficult when you don’t play – mentally, everything.

“You have to work a lot and be ready and believe in that moment.

“It was a gift to him, a gift to the supporters and to all the team because we deserved the win. It is very important.”