The 23-year-old winger made the switch to the Premier League from French side Rennes. Leeds were reported to have paid around €17m.

Raphinha has quickly picked up the pace since moving to England on the final day of the international transfer window. And he’s already taken part in one of coach Marcelo Bielsa’s intense ‘murderball’ sessions where the ball is continuously thrown back in play.

With nine Leeds players away on international duty, right-back Ayling has been able to get a closer look at the Samba star’s skills. And he likes what he sees.

“He’s scored a few good goals already in training and he’s set up a few.

“We did a murderball and I was playing against him. He had some very good touches, very quick, very sharp. It looks like we have got a good player on our hands.

“He’s come straight in, he’s fitted straight in with the boys and Helder Costa has taken him under his wing a bit because they both speak Portuguese and everything.

“I think we have got a good player on our hands.

“He has come in and done really well for the first week that he has been here.

“Obviously he has not met the other lads but we will get back together and it will be exciting.”

Ayling in no doubt over best goal 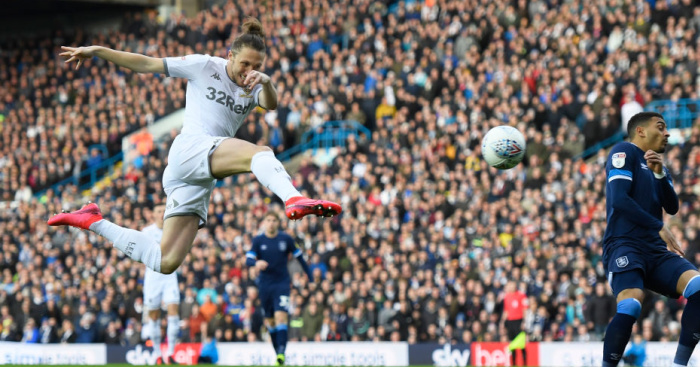 But while Ayling admires some of Raphinha’s goals in training, he’s adamant it doesn’t compare to one of his own.

The 29-year-old scored a ‘worldie’ in a 2-0 win over Huddersfield last season. He later revealed that he’d spent the week after watching it around 30 times a day!

Asked if Raphinha had come close with anything in training, Ayling declared: “No, of course not.

“But that’s not a very good goal, that’s an amazing goal!”