Wolves boss Nuno Espirito Santo has agreed to sell striker Raul Jimenez this summer and wants Benfica’s Carlos Vinicius in as a replacement, according to reports.

Jimenez, who moved to Molineux on an initial loan deal in the summer of 2018, was handed a permanent contract by the West Midlands club last April and has scored 22 goals this season, assisting 10 others.

Despite arguably being Wolves’ best player this season, Portuguese newspaper Record states that Nuno has in fact decided to sell Mexico international Jimenez at the end of the season.

The newspaper claims that Wolves have set aside €60million to launch a raid on Benfica for Vinicius, who tops the Primeira Liga’s scoring charts for the campaign with 15 strikes.

Benfica president Luis Felipe Vieira has reportedly been told that the return of the Premier League will help move the uncertain transfer market along and that, if he agrees to sell Vinicius, the striker’s new destination – Wolves – has all but been agreed.

Meanwhile, a separate report in Record claims that Jimenez – who has previously been linked with a move to Old Trafford – is the Red Devils‘ top strike target. 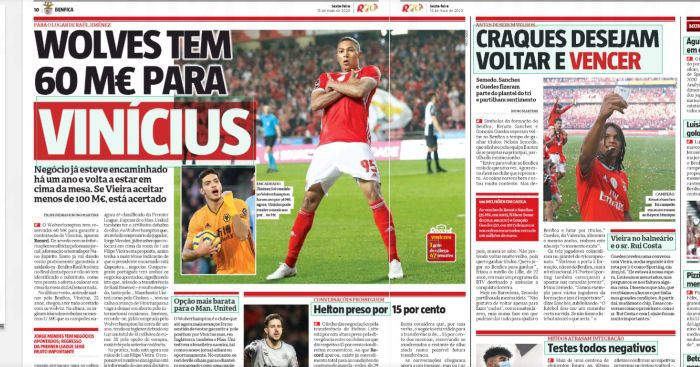 The report adds that while United were considering a move for Vinicius, they have decided to wait for Jimenez to be freed up and believe he is the more “economical option”.

The problem with United’s move for Jimenez, however, is that he has no release clause in his Molineux contract and so it is uncertain what price Wolves will demand for his services.

It is even claimed that United could battle Wolves for Vinicius if their attempts to sign Jimenez fall through.

United boss Ole Gunnar Solskjaer is believed to also want an addition on the wing, as well as a striker, this summer.

Borussia Dortmund’s Jadon Sancho is reportedly the manager’s top target but a report has outlined how the Red Devils have cemented their back-up plans.