Tottenham look unlikely to stop at the signing of Gareth Bale with Jose Mourinho also imploring the club to push through a deal for Andrea Belotti.

Spurs and Real Madrid are locked in talks over Bale after his agent made this massive transfer admission.

The LaLiga giants are desperate to get the playmaker off their books, while Jose Mourinho is keen to bring the player back to the club.

Bale has already admitted he is ready to return to England, with his days numbered at the Bernabeu.

The ongoing negotiations were commented on by Mourinho earlier. The Spurs boss suggested he had sanctioned Bale’s return to the club.

“I tried to sign him during my time at Real Madrid and the president followed my instinct and knowledge. The season I left, he brought Gareth to the club. That’s no secret and Gareth knows that,” Mourinho said.

“A squad is a puzzle and when a new signing completes the puzzle it’s great for the team.”

However, Mourinho hopes Tottenham’s spending doesn’t stop at Bale. According to reports in Italy, Mourinho also ‘dreams of’ adding Torino frontman Belotti into the mix.

As per respected journalist Gianluca Di Marzio, Tottenham have seen a first offer for Belotti knocked back.

As per the respected Italian transfer guru, Spurs have lodged an loan to buy bid for the talismanic frontman. Under their proposal, Spurs asked to loan the Italy striker for the season with an option to buy for €50m (£46.2m) next summer.

However, Torino have responded by saying they will only consider a cash sale now.

A prospective £46.2m purchase might be difficult for Daniel Levy to justify after the signing of Bale.

However, the Daily Express claims Spurs will push Torino into some kind of compromise over the Italy striker.

Should a move for Belotti pay off, Spurs could operate a very impressive forward line. Alongside Belotti, it’s thought Mourinho wants to play  Bale and Steven Bergwijn behind their man man, Harry Kane. The likes of Lucas Moura and Dele Alli could be kept in reserve.

The 26-year-old Belotti has enjoyed a prolific five-year spell in Turin, netting 122 goals in 297 appearances.

Bringing him to the Tottenham Hotspur Stadium would represent a real coup for the club. 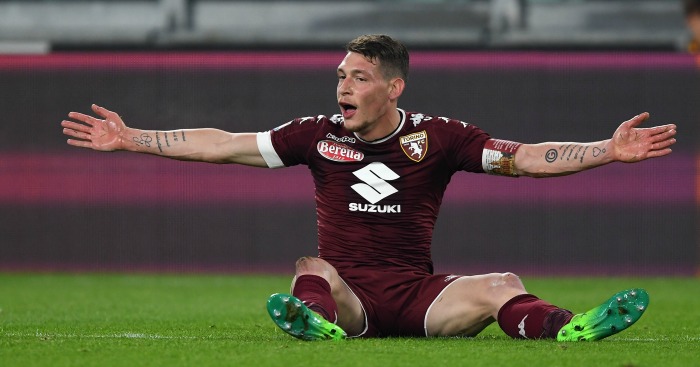 Mourinho has frequently spoke about his need to bring in another striker to provide cover and competition for Kane.

“You look to all the other top clubs and they have many options as centre-forwards and that question doesn’t appear.”