Tottenham boss Jose Mourinho says it makes him “uncomfortable” that an Arsenal coach will be working with Wales international Gareth Bale during the international break.

Albert Stuivenberg, who is Mikel Arteta‘s right-hand man at the Gunners, will assist Robert Page for Wales in the absence of Ryan Giggs.

Giggs himself is absent after his arrest on suspicion of assaulting his girlfriend.

The development, though, has meant that Mourinho felt the need to speak out on the shift in Wales’ coaching setup.

Speaking in Friday’s press conference, the Spurs boss questioned how Stuivenberg could perform both roles.

“It’s not Giggs responsible for these matches and I’m sorry about it,” the manager said. “Because for the previous fixtures he called me, we spoke about Ben Davies – not Gareth because Gareth was not there – and we shared opinions on the situation, which is probably not going to happen this time. 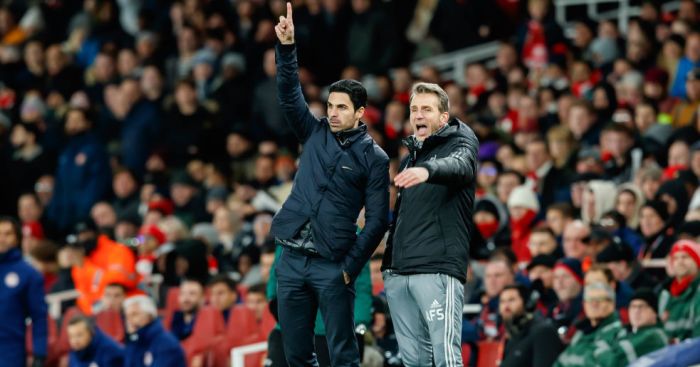 “National team matches should have coaches that work exclusively for them, not coaches who work for other clubs.”

Bale only recently returned from injury and has slowly gained fitness. Indeed, the 31-year-old earned another 65-minute stint against Ludogorets on Thursday.

But Mourinho hopes that going on his first international break of the season will not “destroy” his progress.

“He’s getting better and better and I felt he could play 90 minutes (in Bulgaria),” Mourinho added.

“He’s working so much and we’re all working so carefully with him that we don’t want to destroy the work everybody is doing for the last couple of months.”

Spurs head into Sunday’s clash in magnificent form, after only one defeat since the opening-day loss to Everton.

READ MORE: Mourinho lambasts Tottenham scorer after revealing what he’s not good at