Juventus midfielder Sami Khedira has admitted that sealing a move to the Premier League would be a dream, as he enters the final stages of his career.

The 33-year-old has spent the last five seasons in Turin but looks likely to leave either in January or next summer.

Indeed, amid entering the final year of his contract, he is yet to play under head coach Andrea Pirlo. While he still trains with the club, it is clear he is ready for a change of direction.

Speaking to Sky Germany (via Sky Sports News), the midfielder insisted that a move to the English top flight would be an honour. He also picked out Tottenham boss Jose Mourinho and Everton counterpart Carlo Ancelotti as ideal managers to work with.

“When I was a child it was always a big dream of mine to be a Premier League player,” the 77-time Germany international said.

“I am really happy and satisfied with my career until now but one thing is still missing because I always had this dream and it has never come true… to be a part of the Premier League.

“I enjoyed always to play with my teams to play in the Champions League against the English clubs. The atmosphere, the style and idea of football has always impressed me.

“If it is possible it will for sure be a really big dream [come true] and honour to be a part of the Premier League.” 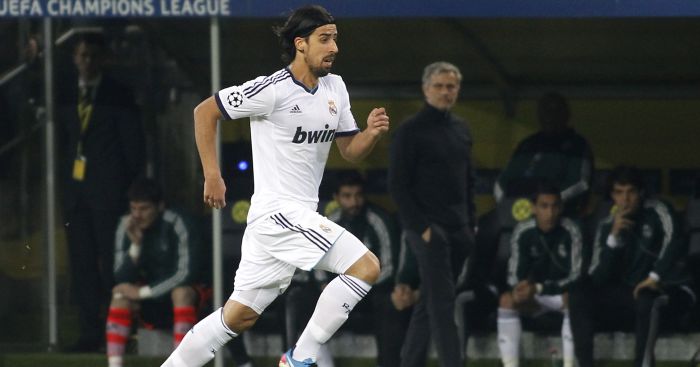 Khedira was one of former Real Madrid boss Mourinho‘s top signings in 2010.

Asked why the Portuguese is a coach he would love to work with, Khedira said: “Because of his personality, He is always honest, direct, clear in his mind and a great coach.

“Many people talk about him [being] too defensive but he is a winner, he is a champion. That is why he impressed me the most.

“I really enjoyed working with Jose Mourinho but there are many coaches who I would like to work with.”

Khedira also revealed he would be keen to work with Toffees boss Carlo Ancelotti. The Italian has an illustrious past, winning the Champions League with three different clubs.

“I would never say no again to Jose Mourinho but it is not the only guy who I would say I would like to work with again,” Khedira said.

“There are many coaches, even in the Premier League that I respect a lot. (Carlo) Ancelotti is doing a great job at the moment and is a great personality. He is one of the coaches who impressed me also.”

The post Mourinho one of two coaches in Juve star’s sights over dream Prem move appeared first on teamtalk.com.