The England international missed all but 20 minutes of last season with a serious knee injury sustained in the semi-final win over Roma in this competition in April 2018.

He made up for lost time by producing exactly the sort of performance manager Jurgen Klopp expects from him, driving forward from midfield and – more importantly – scoring.

His first was good, firing home from just outside the penalty area, but his second was sublime, flicking a first-time shot in off the crossbar.

Sadio Mane and Mohamed Salah also scored – substitute Stephen Odey grabbed a late consolation for the hosts – as Liverpool recorded their first away win in the group stage in five matches and only their second in 10.

Coincidentally Oxlade-Chamberlain scored in the other success in that sequence, the 7-0 victory in Maribor in October in 2017.

Klopp doubled down on the offensive approach by selecting the attacking but previously untried option of Oxlade-Chamberlain and Naby Keita alongside Fabinho.

It was a midfield the masses on social media had been crying out for but what may be attractive in a virtual world really needs to be properly tested in the real one.

Less than two minutes in Klopp got his first indication as Fabinho slipped a sideways pass to Oxlade-Chamberlain who, under little pressure, coolly slotted a low, diagonal 20-yard shot inside the far post.

It was his first goal since he scored in the 3-0 quarter-final win over Manchester City in April 2018, of which this strike was reminiscent.

However, one of the drawbacks of such an attacking midfield is the lack of pressure on the ball and the space it can leave either side of Fabinho and that was evident in the first half where Genk could – and probably should – have scored at least once.

Two changes in defence, with midfielder James Milner and Dejan Lovren replacing Trent Alexander-Arnold (illness) and Joel Matip (knee), contributed to the lack of cohesion but the hosts missed the chance to take full advantage.

Boyhood Manchester United fan Ally Mbwana Samatta screwed a good chance wide under pressure from Keita and Milner’s brilliant recovering, full-stretch tackle took the ball off the toes of Paul Onuachu after he too had raced clear. 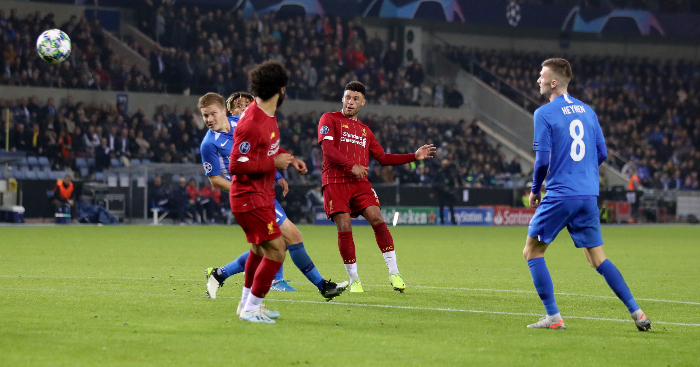 Genk had the ball in the net midway through the half from Samatta’s far-post header but after an interminable wait VAR upheld a late assistant referee’s offside flag.

In keeping with the social media frenzy of the evening Twitter found a new cause celebre when Roberto Firmino’s brilliant individual skill and vision saw him dink a five-yard rabona pass on the edge of the area which Mane fired straight at the goalkeeper.

Liverpool tightened things up slightly more in the second half but Salah, on his return to the side after an ankle injury, endured a frustrating time until his clever reverse-pass allowed Mane to clip the third over goalkeeper Gaetan Coucke.

That seemed to enliven the Egypt international and he brilliantly turned two tight markers in the penalty area to add the fourth.

But there was only one thing being talked about at the final whistle and that was the resurrection of Oxlade-Chamberlain after his serious knee injury.

He tends not to score ordinary goals and his nonchalant outside-of-the-right-foot effort which cannoned in off the crossbar earlier in the half to make it 2-0 was instinctively brilliant and technically perfect.

Odey ruined what would have been a perfect performance to give Genk the goal their first-half endeavours had threatened.

The defending champions have regained some of their swagger but remain a point behind Napoli, 3-2 winners over Salzburg, in Group E.

With a three-point cushion over the Austrian club and the return fixture against Genk to come next things are looking relatively comfortable for Klopp’s side.

The post Oxlade-Chamberlain back to his best as Liverpool beat Genk appeared first on teamtalk.com.