It’s not just their incredible start to the season which has made Liverpool overwhelming title favourites – there’s also a number of coincidences between this season and the last time they were English champions.

Liverpool’s win against Manchester City at Anfield earlier this month extended their lead at the top of the Premier League table to nine points and shortened their odds of winning a first league title in 30 years to 2/5 with GentingBet.

With the Anfield faithful now dreaming of a first league triumph in three decades, a team of analysts at sports betting operator GentingBet have unearthed a number of remarkable similarities between the title winning team of 1989/90 and this season’s side, all of which point towards a Liverpool league victory.

Kenny Dalglish’s side opened their campaign at Anfield with a 3-1 victory over Manchester City, with John Barnes, Peter Beardsley and Steve Nicol on the scoresheet for the Reds. This season Jurgen Klopp’s side beat City by the same scoreline. These are the only two instances over the last thirty years that Liverpool have beaten Manchester City by that result at Anfield.

At this stage in the 1989 / 90 campaign, Kop legend John Barnes was the club’s leading goalscorer with seven league goals under his belt. Fast forward three decades and Senegalese forward Sadio Mane is currently Liverpool’s top goalscorer for the season – also with seven goals to his name.

And, at this stage of the season 30 years ago, Liverpool had conceded 10 goals, just as they have done in the current campaign. They were also top of the league heading into December, just as they are now. It’s also worth noting that Liverpool have form for signing off a decade with a league win. It’s a feat they achieved under Bob Paisley in 1979 / 80 and then again under Dalglish in 1989 / 90.

There’s a sense of déjà vu about the playing staff as well. The title winning squad of 30 years ago boasted 11 English players including the talents of John Barnes, Peter Beardsley and Barry Venison.  Jurgen Klopp has 11 English players registered for his squad which features fan favourites Jordan Henderson, James Milner and Joe Gomez.

Up front, a 28-year-old Peter Beardsley was leading the line for Liverpool, just as a 28-year-old Roberto Firmino is doing today.

Defensive lynchpin Gary Gillespie shares a July 5th birthday with fellow defender Dejan Lovren. And, as if to prove that the stars are well and truly aligning for Liverpool this year, the two captains, Alan Hanson and Jordan Henderson, share a star sign (both are Geminis), as do Bruce Grobbelaar and Alisson Becker who are both Libras. 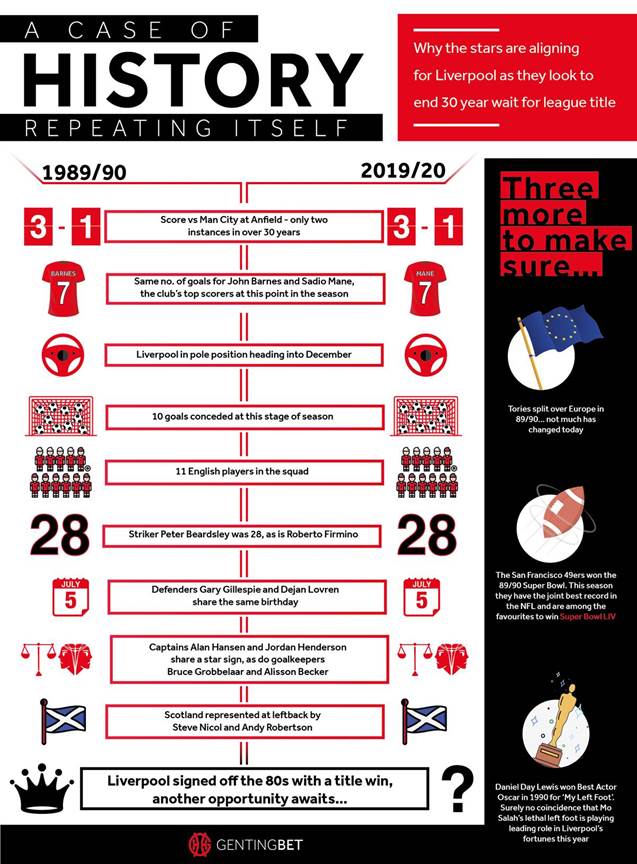 Billy Sharp, Head of Sportsbook at Genting, said: “Liverpool look the real deal this season and have moved into favoritism with us for the title. But for all those fans who need a little more convincing about their title credentials, our research shows that the 2019/20 season really could be their year.

“There are some striking similarities with the 1989/90 side. Everything from the performances to the playing staff points towards a Liverpool title come the end of the season.”

Away from football there’s further proof to be had that history is on the verge of repeating itself. Thirty years ago, the Tory party was split by Eurosceptics and pro-European factions, just as it is today.

Elsewhere in sport, the San Francisco 49ers won the 1990 Super Bowl and this season they are enjoying one of their best campaigns to date. With a record of 9-1 so far this NFL season, they look a shoo-in to win their conference and are among the favourites with GentingBet for Super Bowl LIV (yes, even the Roman numerals of this year’s Super Bowl point towards Liverpool).

And, finally, in the world of showbiz and entertainment, in 1990 Daniel Day Lewis won the Best Actor Oscar for his portrayal of Christy Brown in My Left Foot. No coincidence then that Mohamed Salah, so lethal with his left foot, has scored five of his six league goals with his left foot.