Manchester United boss Ole Gunnar Solskjaer says his side’s showing of desire to hit back at Brighton was a “big plus” that his players would not have shown last season.

Despite the hosts taking the lead through Neal Maupay’s cheeky penalty, the Red Devils then made it 2-1.

What’s more, Brighton thought they had snatched a well-deserved point with a late equaliser, only for Fernandes to slot home after Maupay handled the ball in the area.

Speaking to BT Sport after the game, Solskjaer insisted that his side showed fantastic improvement.

“When they equalised you thought ‘that’s two points lost’ or maybe one point was what we deserved,” the United boss said.

“We went straight up the other end and created a corner and that’s a big thing for us compared to last season, we had too many draws.

“We were the team that had the least defeats apart from Liverpool but we had too many draws, so that’s a big plus for us.” 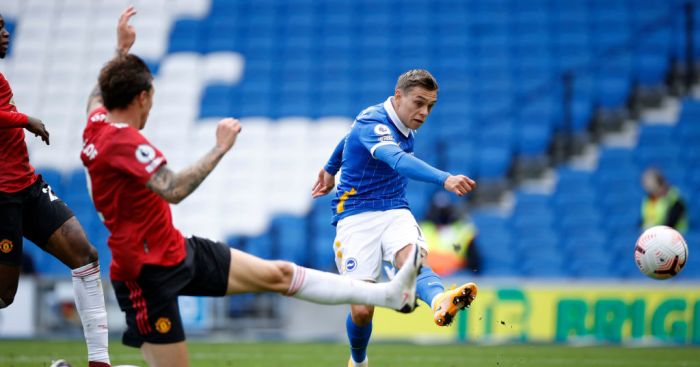 Brighton were unlucky not to take more from their afternoon’s work. In particular, Leandro Trossard hit each post and the bar.

Solskjaer joked that he was pleased that Jose Mourinho – who showed concern about the size of Shkendija’s goalposts on Thursday – was not in town.

Pressed on Brighton’s constant threat, the Norwegian said: “First of all you have to be happy Jose’s not here to check on the goalposts, there might have been a smaller goal!

“But they created too much for my liking but they’re a difficult team to play against,” Solskjaer added. “We tried to press, they’ve got really good ball players at the back so we didn’t really get there.

“And then you can see we didn’t have the legs or the sharpness or the legs still, but we’ll get there.”

United’s next task sees them face Brighton again on Wednesday, this time in the Carabao Cup.