Paul Pogba was told by Jose Mourinho that he was not fit to captain Manchester United – but Ole Gunnar Solskjaer sees the midfielder as a leader and would have no hesitation in handing him the armband.

The high of helping France to lift the World Cup over the summer was followed by a maddening few months at Old Trafford, where the 25-year-old grew unsettled as tension built with the manager.

Things seemed to come to a head in September as Mourinho told “second captain” Pogba he would not skipper United again in the build-up to the Carabao Cup defeat to Derby, with remarkable footage emerging the following day of a heated training-ground conversation between the pair.

Their relationship never recovered and the midfielder was not even getting minutes by the end of the Portuguese’s reign, never mind the armband.

But Pogba has been reborn under Solskjaer and has displayed leadership qualities, with video showing him geeing up team-mates before the Boxing Day win against Huddersfield – the second in their current run of seven straight wins in all competitions under the caretaker boss.

Asked if Pogba would be in contention to captain the side moving forwards, his former reserve team boss said: “Definitely, yeah, because I know the boy from before and he is a leader.

“He’s a character, he influences people and you’ve seen the videos from France, and he cares and he really wants to be successful.

“He knows he can’t do it by himself. It’s a team game and he’s a character that brings so many good things with him when he’s enjoying himself, I have to say.

“You see the personality. He’d love playing football, he’s a larger-than-life character, that’s just the way he is.

“When the performances come as well, that marries together as a good leader and you see what it meant to him winning the World Cup in what France broadcast. So, for me, yes, he’s captain material.”

Solskjaer listed captains from his playing days, varying from Eric Cantona leading by example to the intensity of Roy Keane, and vocal nature of Gary Neville to the respect shown towards Ryan Giggs.

“We’ve had some iconic captains here with Steve Bruce and Bryan Robson, so personalities… big personalities,” the United boss said.

“I think that’s important, that you’re not afraid of standing in front of your team-mates and putting them in their place if you have to.

“And I have to be fair to Ash [Ashley Young], who’s now our skipper, he’s maybe one of the last old-school ones, he sounds like Rio (Ferdinand) and Gary and all them.”

The caretaker manager’s comment about Ashley Young raised eyebrows given he had been vocal in his support of Antonio Valencia earlier in the month.

“Ashley’s wearing the armband, yes, because Antonio’s struggled with fitness as well, in and out,” Solskjaer explained.

“But Antonio’s still the club captain, but Ash is wearing the armband when he’s playing.

“I’ve never been a fan of ‘you’re this and you’re that’. Once in a while it’s to give, say David (De Gea) was captain one of these games when Ash didn’t play.

“So, there’s 11 captains out there really, it doesn’t really bother me. 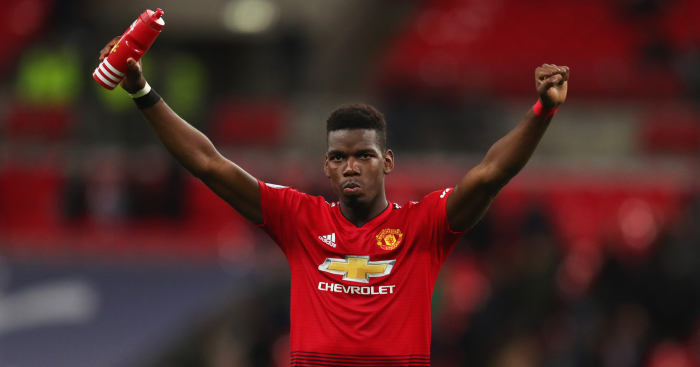 “I was captain for Norway, and quite a few times for United but I still don’t tell my kids I was captain of Man United or Norway, but once in a while you are.”

Valencia was not spotted in the squad heading to Arsenal on Friday night in the FA Cup fourth round, nor was star goalkeeper De Gea.

Chris Smalling, Marcos Rojo and Marouane Fellaini are out of the clash against a side that Solskjaer was involved in plenty of battles with during what was a “special rivalry”.

“And then you see Patrick (Vieira) and Roy do a TV programme together!” the former striker said with a laugh.

“There were some fights in the tunnels and on the pitch, it was just everything that I loved about football, that passion. That famous one, where John O’Shea scored, was it 4-2?

“There was a nice little fight before the game but that is part of the game. That is what makes it so interesting for the fans as well. Let’s make sure it’s a good game of football.”

The post Solskjaer disagrees with Mourinho over Pogba role appeared first on teamtalk.com.

3 thoughts on “Solskjaer disagrees with Mourinho over Pogba role”