Ole Gunnar Solskjaer fully expects Manchester United to finish in the Premier League’s top four after backing his squad to cope with a tough-looking run of February fixtures.

The Norwegian hit a first bump in the road since becoming caretaker manager as Burnley visited on Tuesday, with a late comeback required to seal a 2-2 home draw as his eight-match winning start to life at the Old Trafford helm came to an end.

That run means Solskjaer’s side enter the weekend just two points off the Champions League qualification places – quite the turnaround considering they were 11 points off the pace when he succeeded Jose Mourinho in December.

United will attempt to increase the pressure on top-four rivals Arsenal and Chelsea by winning at Leicester on Sunday, kicking off a tough month which includes the Champions League last-16 first leg against Paris St Germain and FA Cup fifth-round trip to Chelsea.

“We’ve had now six weeks together. We’ve found out what strengths, weaknesses we’ve got.”

The interim United boss, who has reportedly been told he must beat PSG if he wants the job permanently, added: “I think we’ve risen to most of the challenges, maybe of course the setback of the two Burnley goals we conceded, maybe they will make us move to the next level because I think we’ve given ourselves a chance now to get into the top four maybe earlier than we thought.

“It’s not too many games, there’s still a week between every single one of them but it’s tough opposition. Definitely.

“You start with this game against Leicester, Fulham away as well is also a tough one. 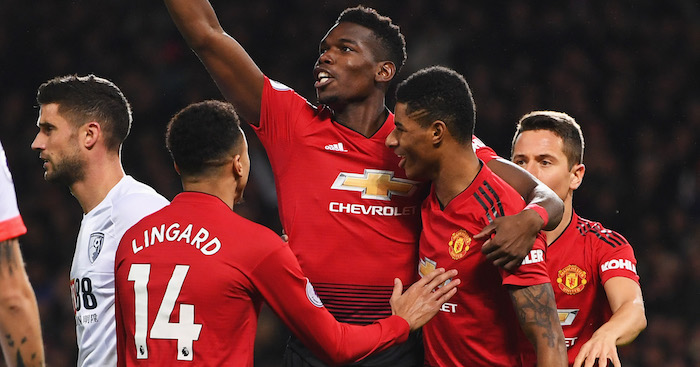 “Then you’ve got the three big ones you can call it, with PSG, Chelsea and Liverpool after each other. Then a very hard one, when you think you’ve done with those three, with Palace away. So it’s a tough month – but we’re ready.

“I’ve got a big squad, it’s only Marcos Rojo now who’s out for a period, the rest are fit and available.”

Solskjaer expects Anthony Martial – fresh from signing a new contract – and Paul Pogba to be fit for the trip to the King Power Stadium after the former missed the Burnley match through injury and the latter was seen limping away from Old Trafford.

The post Solskjaer: This is why Man Utd can finish in the top four appeared first on teamtalk.com.