Gareth Southgate was full of praise for Raheem Sterling after his scintillating hat-trick against the Czech Republic – and he praised one particular aspect for his improvement.

After doing so well in the World Cup and Nations League, momentum doesn’t appear to be slowing down as England started their campaign to qualify for Euro 2020 in emphatic fashion with a 5-0 win at Wembley.

Sterling was in rampant form as he scored a hat-trick and won a penalty as Gareth Southgate’s convincingly swept aside the visitors.

“I thought Raheem was electric all night,” said Southgate, speaking to ITV after the match.

“He has looked like that all week in training. Involved in four of the goals, I’m really pleased for him, it is a special night for him.”

See how the match progressed and get all the big-match reaction via our Live Centre. 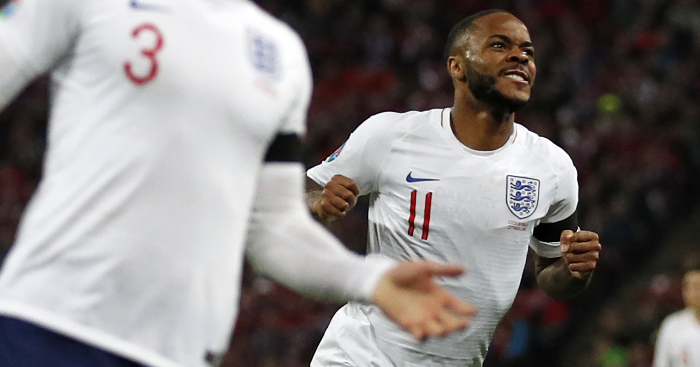 Scoring his first inside the six-yard box at the end of a Man City-esque move, he didn’t let up from there as he broke into the box to win a penalty for England’s second and produced a clever curling finish for the third.

He was perhaps a little fortunate for his hat-trick goal as a wicked deflection took his long-range effort past the Czech goalkeeper, before leaving the field to a standing ovation when he was substituted late on.

Asked what’s changed for Sterling, who until recently often struggled in an England shirt, Southgate responded: “I just think he’s really matured as a person and as a footballer.

“He’s hungry for those goals now, he’s determined to get into the right areas of the pitch, and the quality of his finishing – he’s just hitting things instinctively without thinking too much.”

“His development is going through the roof and his decision-making is getting better and better,” said Joe Cole. “He’s turning himself into a midfielder with a striker’s mindset. It’s a great achievement to score a hat-trick for England.”

“Raheem has brought his Man City form into his England play. The fans know what he’s been through so of course, they’re going to get behind him,” added Ian Wright.