Tottenham Hotspur vs Leeds United on matchday 17 of the Premier League was a much-anticipated fixture for a number of reasons. It was José Mourinho vs Marcelo Bielsa for the very first time in England, a well-drilled defence vs an all-out attack, and every FPL manager’s second-favourite side vs every football fan’s second-favourite football team.

The match ended in a comfortable 3-0 victory for Spurs, but the overall balance of play showed that they certainly didn’t deserve to win so easily. Leeds, as they did with every other top-six side, didn’t back down and went toe-to-toe against Tottenham. If anything, it was the home side that had to sit back at times.

A major narrative in this match was the differing ideologies of the two managers – Mourinho’s more pragmatic, defensively-solid and counterattack-based style up against Bielsa’s crazy full-throttle brand of football. In this tactical analysis, we’ll take a look at some of the opposing philosophies on display in this match:

Marcelo Bielsa is called ‘El loco’ for good reason. He asks his players to run around like madmen when they are on the pitch. This is very evident in Leeds United’s press, where they chase the ball around relentlessly. 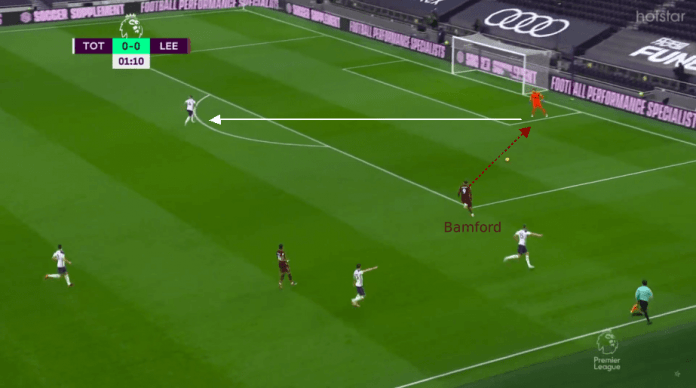 Patrick Bamford is usually the trigger. Here, he starts it off by hunting the ball down as it is played back to Hugo Lloris. 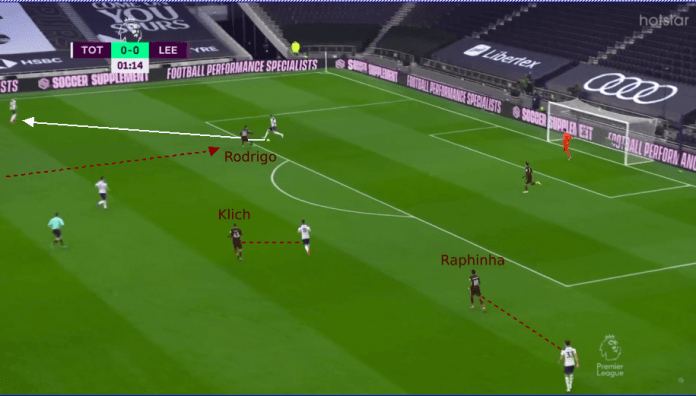 In the previous frame, there was no one near Toby Alderweireld. But, by the time the ball had reached him, Rodrigo was already breathing down his throat, so he had to play it on immediately. Notice how Mateusz Klich and Raphinha are tight to Harry Winks and Ben Davies respectively, meaning that Alderweireld had to play the ball on to Matt Doherty. 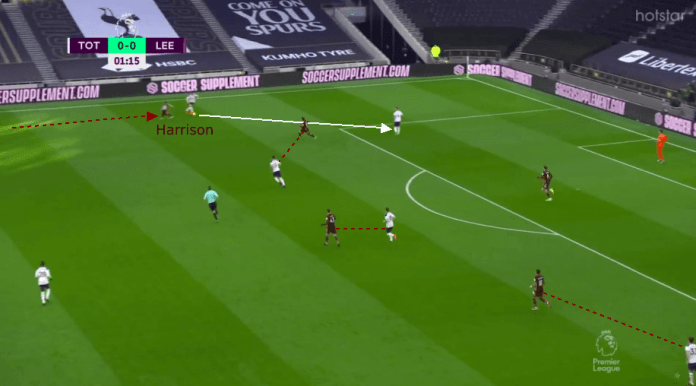 There was no respite for Doherty either, though, as he too was quickly closed down by Jack Harrison. Although he could play it back to Alderweireld, there was no way out for Tottenham thereafter as Leeds man-marked everyone in their 4-1-4-1, so they had to punt the ball up the pitch. 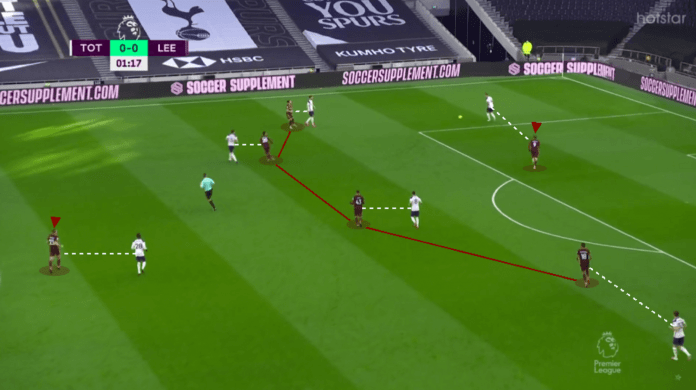 Tottenham, on the other hand, didn’t press so intently, as they sat further up than usual, but didn’t press as high as Leeds and allowed their opponents to pass around at the back on most occasions as they were happier to maintain their shape. 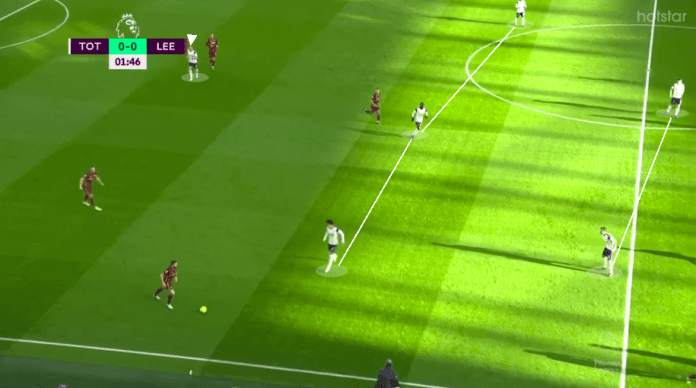 This is not to say that Spurs did not press at all, though, as we will discuss below.

Leeds United have kept an average of 57.6% of the ball per match so far this season in the Premier League – the third-highest possession in the division behind Manchester City and Liverpool. This obviously means that they like to play out from the back, and here’s how they do it: 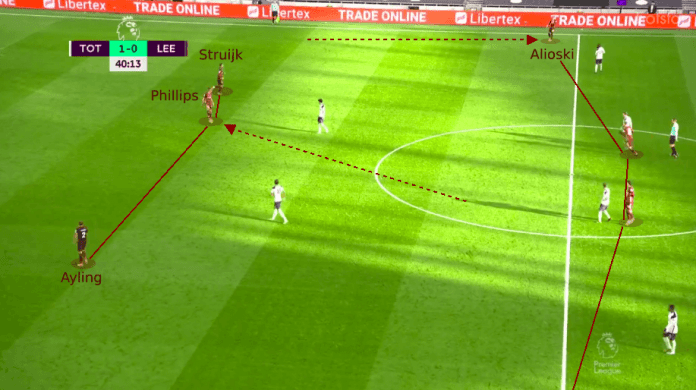 When they have the ball in their defensive third, Leeds move into a sort of a 3-4-3 shape, as Kalvin Phillips drops in between the centre-backs, while the two full-backs push up. 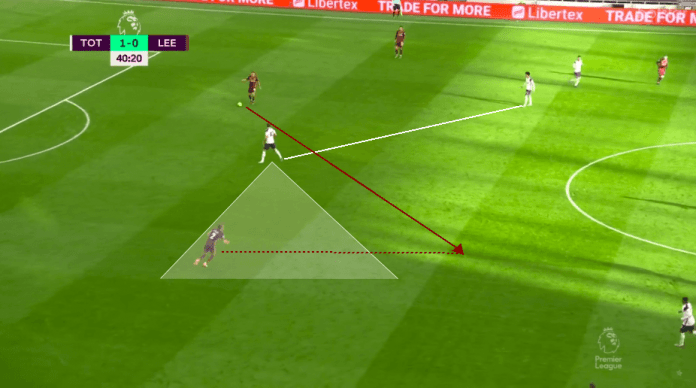 Often, one of the two centre-backs pushes up the pitch to carry the ball forward. Here, Luke Ayling moves out of Harry Kane’s covershadow to open up a passing angle for Phillips and progress the ball forward. 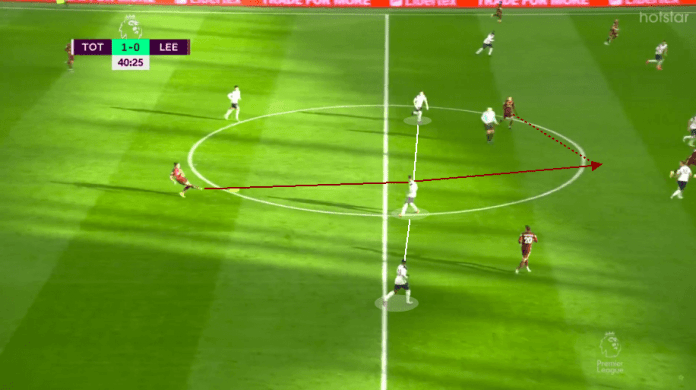 At this point, Leeds do one of two things. They either play a long ball to a wide area where a full-back or winger has some space to himself, or play a line-breaking pass through the midfield. In this case, Luke Ayling did the latter. 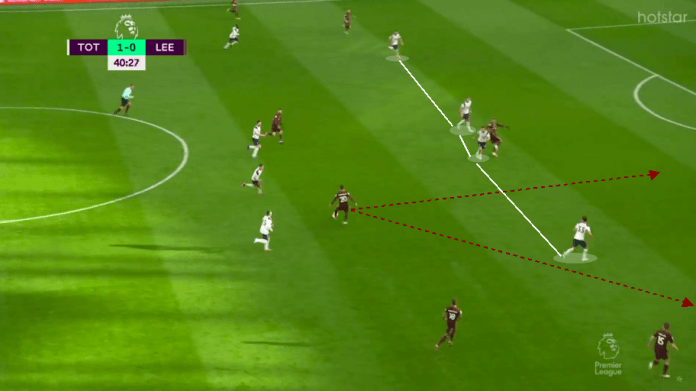 After getting in between the lines, Leeds can cause some real damage. In this position, Rodrigo had two clear options – to play Bamford through on goal down the middle or to send Dallas racing up the right. Unfortunately, he got his pass wrong and the move slowed down a little, but it was clear to see that Leeds could get into good positions by playing their way through Spurs.

However, Leeds’ playing out from the back could hurt them as well, especially when Spurs elected to press. This is exactly how they conceded the penalty for their opener, as a loose pass was pounced upon by Tottenham.

As Spurs were pressing Illan Meslier, the keeper was a bit hurried in his passing. He had three teammates around but ended up splitting the gap between two of them and allowing Harry Winks to intercept with ease. Look at how disjointed Leeds’s defence is thereafter: 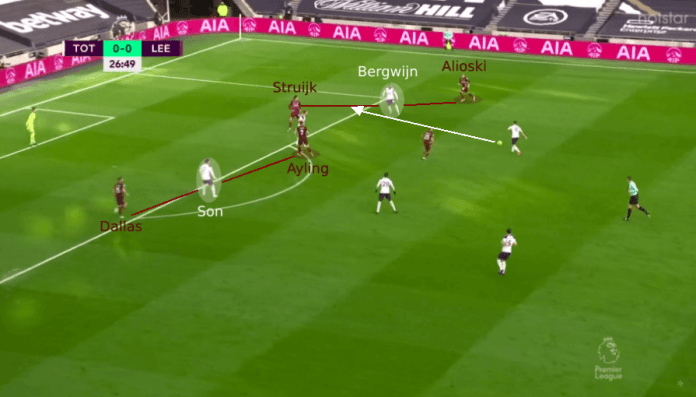 There are two major gaps in the Leeds United defence – one between Stuart Dallas and Luke Ayling where Heung-min Son is positioned, and the other between Pascal Struijk and Ezgjan Alioski where Steven Bergwijn has managed to get goalside of the left-back. Winks opts to exploit the latter with his pass, and in an attempt to make up for his positional problem, Alioski ends up fouling Bergwijn in the box.

Tottenham have a very different way of working with the ball. They don’t pass it around the back too often but instead like to thump it forward and contest the first and second balls.

That’s exactly how their second goal came about. A drop-kick from Hugo Lloris kicked it all off, and after Pierre-Emile Højbjerg won the second ball, Leeds were in trouble. Take nothing away from Harry Kane’s quality here, though, as he skipped past his man and delivered a pinpoint cross for Heung-min Son, who had a simple tap-in to bring up his 100th Spurs goal.

A match between two sides with near-opposite ideologies was won by the team with greater individual quality and the one that made fewer mistakes. Leeds’ sloppiness was thoroughly punished, as Illan Meslier’s misplaced pass led to the opener, and his failure to catch the ball on two occasions in the second half led to the third goal. The Lilywhites might feel that they should have at least scored once, and if they did make the most of their openings in the first period, we might have been looking at a different result.