Leicester moved up to second in the Premier League table as Youri Tielemans scored twice in an impressive 4-1 win at Leeds.

The visitors were 2-0 up after 21 minutes through Harvey Barnes and Tielemans before Leeds rallied with a Stuart Dallas strike at the start of the second half.

But a Jamie Vardy tap-in and a penalty from Belgian midfielder Tielemans sealed all three points for Brendan Rodgers’ men.

Spain international striker Rodrigo missed out for Leeds as he was isolating after coming into contact with someone with coronavirus, with Pablo Hernandez coming in.

Liam Cooper returned though after missing the 3-0 win at Aston Villa, while Jamie Shackleton was also handed a start in midfield.

What should have have been a dream start for the home side turned into a nightmare one in just the second minute.

Patrick Bamford spurned a golden opportunity when he headed straight at Kasper Schmeichel from close range, and the Foxes went straight up the other end to open the scoring through Barnes.

Robin Koch’s woeful back pass was pounced on by Vardy, who squared for England man Barnes to tap home.

But it was 2-0 in the 21st minute as a rampant Leicester side struck again through Tielemans. 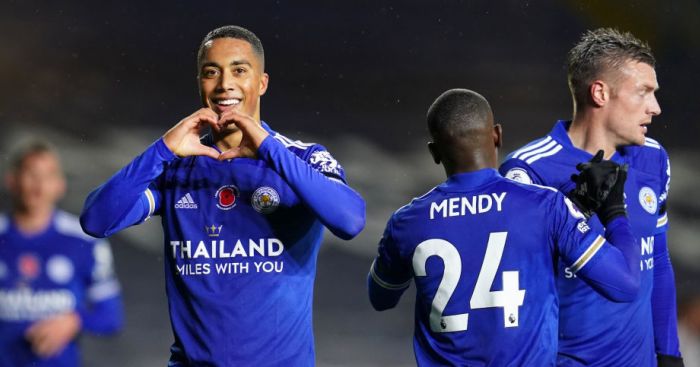 Marc Albrighton’s cross from the right was met by a diving header by Vardy, Meslier saved but Tielemans swept home the rebound.

Marcelo Bielsa’s men at least ended the half with a decent spell of pressure, with Bamford’s poor control costing him the chance of pulling a goal back.

Leeds made the perfect start to the second period, however, when they pulled a goal back thanks to a touch of fortune.

A short corner was worked to Dallas, whose inswinging cross to the far post missed everyone and crept past Schmeichel.

The home side were then unluckly not to draw level when Pablo Hernandez shifted the ball onto his right foot and curled a delightful effort onto the bar from 25 yards. 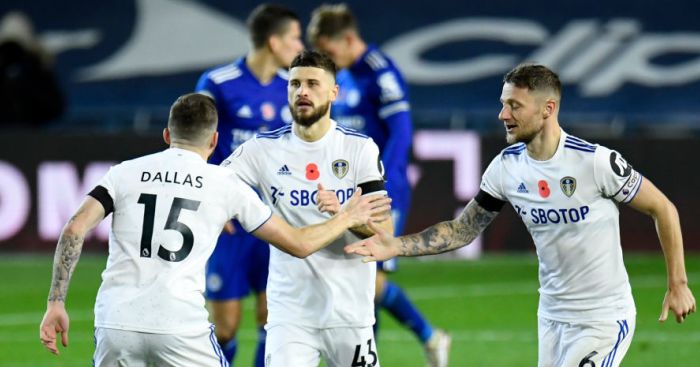 Mateusz Klich forced Schmeichel to scramble to save a 30-yard effort as Leeds continued to press, while Tyler Roberts was introduced for Hennandez with just over 20 minutes to go.

Bielsa’s men were calling for a penalty with 15 minutes to when Luke Ayling went down under a challenge from Christian Fuchs, but replays showed that the Leeds skipper was going down before any contact was made.

Leicester then provided the classic sucker punch as they restored their two-goal margin thanks to the help of two substitutes.

James Maddison played in Cengiz Under, who chipped the ball over the advancing Meslier and Vardy raced across goal to clip the ball home.

Vardy missed a great chance to completely put the game to bed with seven minutes to go when he was clean through, but his dink over Meslier drifted wide.

Leicester did have a fourth in the 90th minute, however, when a VAR check found that Klich had felled Maddison just inside the area and Tielemans scored from the spot.