Former Liverpool, Tottenham and England goalkeeper Ray Clemence has died at the age of 72, the Football Association has announced.

Clemence, who won three European Cups and five First Division titles during a trophy-laden spell at Anfield, was arguably one of the greatest goalkeepers of his generation.

He won 61 England caps, which would undoubtedly have been many more had he not been competing with Peter Shilton, who accumulated 125, for the number one shirt.

An £18,000 signing from Scunthorpe by Bill Shankly, Clemence was a key member of the Liverpool team which dominated Europe between 1977 and 1981, and also picked up two UEFA Cups, an FA Cup and the League Cup.

“With great sadness, we write to let you know that Ray Clemence passed away peacefully today, surrounded by his loving family,” said a statement from the Clemence family.

“After fighting so hard, for such a long time, he’s now at peace and in no more pain.

“The family would like to say a huge thank you, for all the love and support that he’s received over the years.

“He was loved so much by us all and he will never be forgotten.”

Clemence is survived by his wife Veronica, son Stephen – a former player himself and now a coach – and daughters Sarah and Julie.

The Football Association said it was “extremely saddened” to learn of Clemence’s death.

Clemence had been living with advanced prostate cancer since 2005.

In interview in 2018 with Prostate Cancer UK, the former goalkeeper spoke about how he was dealing with the illness, saying: “I just want to give a positive attitude to everybody who has a connection with prostate cancer, whether they’re helping to find cures or they’ve got it.

“There’s lots of talk about men like me only lasting five or six years with it. Well I’m 13 going on 14 years now, and I’m doing all the things that I want.

“I’m a survivor, basically, and I want to continue enjoying life for as long as possible.” 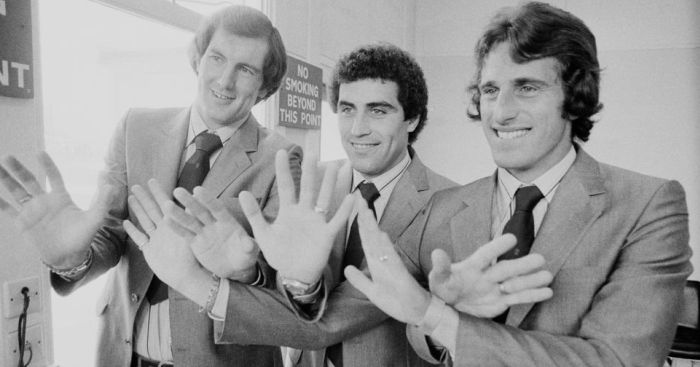 Liverpool paid tribute to their former player, saying on Twitter: “We’re deeply saddened by the passing of one of the greatest ever goalkeepers, Ray Clemence.

“The thoughts of everyone at Liverpool Football Club are with Ray’s family and many friends.

England players will now wear black armbands during their Nations League game in Belgium on Sunday evening and will pay tribute to Clemence before Wednesday’s match against Iceland at Wembley.

Tottenham tweeted: “We are deeply saddened to report the passing of legendary former goalkeeper Ray Clemence.

“We extend our deepest sympathies to Ray’s family and many friends throughout the game at this sad time.”

Ossie Ardiles, who played with Clemence at Tottenham, tweeted: “So so sad to heard the news of Raymondo passing away. He was a great goalkeeper, wonderful companion, friend. He battled this illness right until the very end. We will miss you. Rest in peace my friend. My family and my thoughts and prayers go out to Vee, her family and friends.”

He added on Twitter: “Clem was a fantastic teammate and great to be around. I will never forget how he helped me to settle in at Anfield. Our thoughts are with the Clemence family. RIP Clem.”

Clemence’s long-time rival for the England number one spot Shilton tweeted: “I’m absolutely devastated to be told of the sad news that @RayClem1 has just passed away we were rivals but good friends Ray was a brilliant goalkeeper with a terrific sense of humour I will miss him a great deal as we’ve kept friends long after retiring RIP my friend.”

The post Tributes pour in after passing of legendary keeper Ray Clemence appeared first on teamtalk.com.