Tomas Soucek popped up in injury-time to give West Ham a last-gasp 1-0 victory over Fulham as the visitors missed from the spot in a dramatic finish at the London Stadium.

That looked to be that but with 97 minutes on the clock, Benrahma turned to villain when bringing down Tom Cairney in the box.

After a VAR check, Fulham were awarded a penalty and a golden chance to escape with a draw.

But Ademola Lookman‘s attempt at a ‘Panenka’ penalty went horribly wrong as he chipped his spot-kick straight into Lukasz Fabianski’s hands.

That gamble-gone-wrong condemned Fulham to a 13th straight defeat in a Premier League London derby. And left Scott Parker’s side with only four points and just a place above the drop zone.

West Ham, meanwhile, moved up to 11th place after the late, late drama.

David Moyes’ hosts had done well to take five points from a tricky run of fixtures against Leicester, Spurs, Manchester City and Liverpool.

And they kicked off here with the same starting XI that lost narrowly at Anfield.

That meant record signing Sebastian Haller up front due to the absence of the injured Michail Antonio.

In a bright opening, the Hammers created a flurry of early chances. Inside the first five minutes, Fulham goalkeeper Alphonse Areola had to save from both Arthur Masuaku and Aaron Cresswell.

Jarrod Bowen then saw a volley from outside the box tipped over. And from the resulting corner Haller rose highest to clip the top of the crossbar with a fine header.

After weathering that early storm, Fulham found a foothold. Cairney’s shot across the area was almost turned in before Aleksandar Mitrovic couldn’t direct a header on target from 10 yards.

West Ham had a penalty appeal just after the half-hour mark. But Joachim Andersen’s challenge on Haller was deemed legal and VAR didn’t intervene.

Mitrovic was later played through but made a mess of the opportunity. His blushes were spared when an offside flag went up as the first half slightly fizzled out.

Just three minutes after the break, West Ham hit the woodwork for a second time.

Harrison Reed gave a free-kick away on the edge of the area. And Creswell’s superb curling strike clipped the top of the bar to Fulham’s relief. 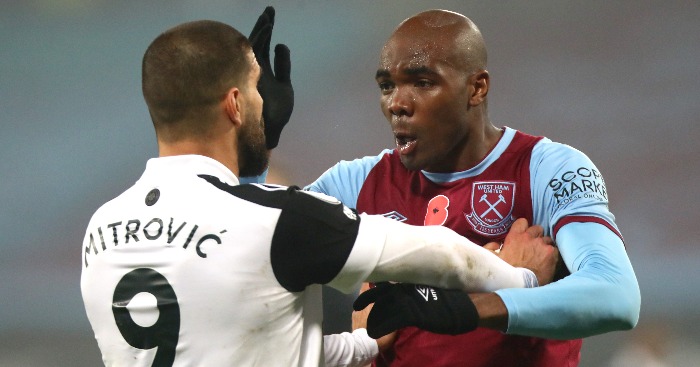 Reminders that this was a derby came in the 56th minute when Mitrovic and Ogbanna squared up.

Mitrovic was booked for pushing the Hammers defender in the chest. Ogbanna then picked up a yellow of his own after a rash challenge on Cairney and later went off with a groin injury.

But as the game became scrappy, West Ham faded and Fulham came to the fore again.

Lookman fired straight at Fabianski after a free-kick and Bobby Decordova-Reid’s strike from 15 yards was also kept out by the West Ham stopper.

Moyes tried to inject some attacking potency by bringing on new signing Benrahma and Manuel Lanzini with just under 20 minutes to play.

The move paid off for West Ham when Benrahma took advantage of some poor Fulham defending to set up Soucek to slot fire home from 14 yards after 92 minutes.

And that proved the winning goal but only thanks to Lookman’s late howler.