Liverpool turned down an approach from Wolves to sign defender Neco Williams earlier this summer, according to a report.

The Times claim that the Welsh international was wanted by the Molineux club when they let Matt Doherty move to Tottenham.

Williams caught the eye with his attacking displays from right-back at the end of last season. And Wolves had identified him as a player who would fit their wing-back system well.

However, Williams signed a five-year deal with the Reds and nothing materialised.

In the end, of course, Wolves and Liverpool were involved in some key transfer activity.

Diogo Jota moved to Anfield for £41m, although the champions paid just £4m up front.

And Ki-Jana Hoever headed the other way, joining Nuno Espirito Santo’s side for a fee rising to £13.5m.

Jota has been a sensation so far with seven goals in his first 10 appearances for Liverpool. That included a hat-trick against Atalanta in midweek.

Hoever is more of a long-term project for Wolves. They eventually moved for Barcelona right-back Nelson Semedo, who has been plugged in as first choice.

However, Dutch youngster Hoever has been a regular in the matchday squad and appeared from the bench against West Ham and Fulham. 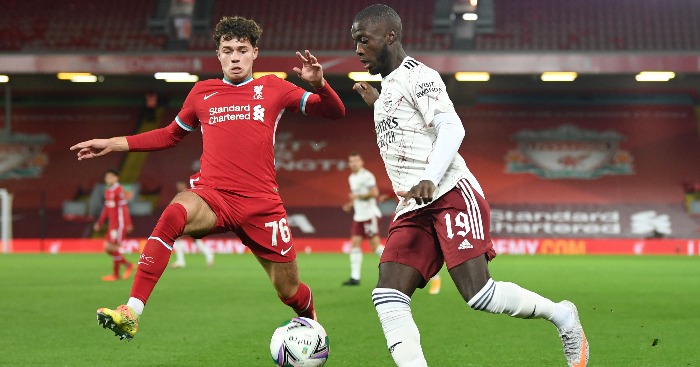 Williams has developed into a regular for Wales in the last few months.

He’s played five times for his country and scored the winner in their Nations League victory over Bulgaria.

But at Anfield it’s namesake, Rhys Williams, who has made the headlines.

The teenage centre-back has been given an opportunity due to injuries to Virgil van Dijk and stand-in Fabinho.

As for the right-back role at Liverpool, Trent Alexander-Arnold has started every Premier League and Champions League game so far.

However, Welsh ace Williams has still made four appearances. He started the Community Shield game with Arsenal. And he also played in Liverpool’s EFL Cup ties against Lincoln and The Gunners.

In midweek, Williams saw his first Champions League action of the campaign. He replaced Alexander-Arnold with eight minutes to go.

Overall, the 19-year-old has been in 10 of Liverpool’s 13 matchday squads. Jurgen Klopp regards him as a key part of the squad and, for now, he’s ideal back-up at right-back.