The Hammers crumbled to a 3-0 defeat at Wolves on Tuesday as Marko Arnautovic made a disastrous return.

West Ham rejected a £35million bid for the forward from Chinese side Shanghai SIPG this month and he signed a new deal on Saturday.

He missed two games – including the shock 4-2 FA Cup defeat at AFC Wimbledon – but was forced off at Molineux with a foot injury and left on crutches.

And Zabaleta feels speculation around Arnautovic and others has caused some damage after three straight defeats.

“Honestly, I think so many situations off the field have been creating a little bit of a bad atmosphere,” said the defender, ahead of Monday’s visit of leaders Liverpool.

“I’m not just saying that is the only thing – because we lost two (league) games.

“I remember in December, when we had a good run, you could see West Ham playing as a team.

“In January, it’s been tough on and off the field and the only good thing was the win against Arsenal.

“But the reality is if you want to be a better team and be in a better position then you can’t go from beating Arsenal to losing three games against two mid-table teams and a smaller team in the FA Cup. 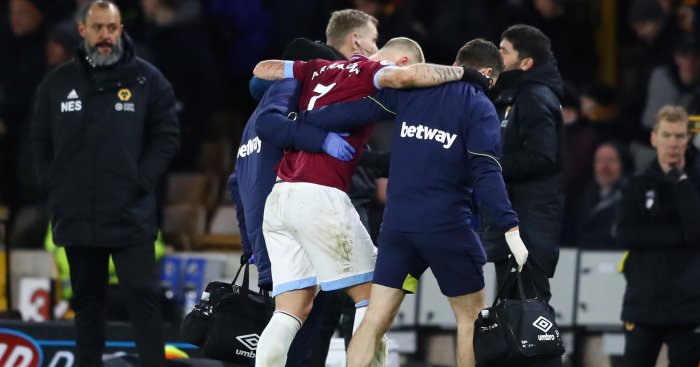 “I can’t wait for February 1 and everyone is back on it again, we need commitment again from everyone.

“I understand January is a difficult month for clubs, because you can have big interest in your best players.

“But Arnie was out of the squad for two games, he’s been the main player for us.

“When you see so much speculation around the team, players moving on, or some coming in, that can distract a little bit with the atmosphere in the dressing room, it’s hard for the manager as well.

“I’m not saying it’s all about Arnautovic, it’s not only his situation. There have been many players, names around the media.

“If we want to become the team we were in December, then we need to bring everyone together and stick together.”