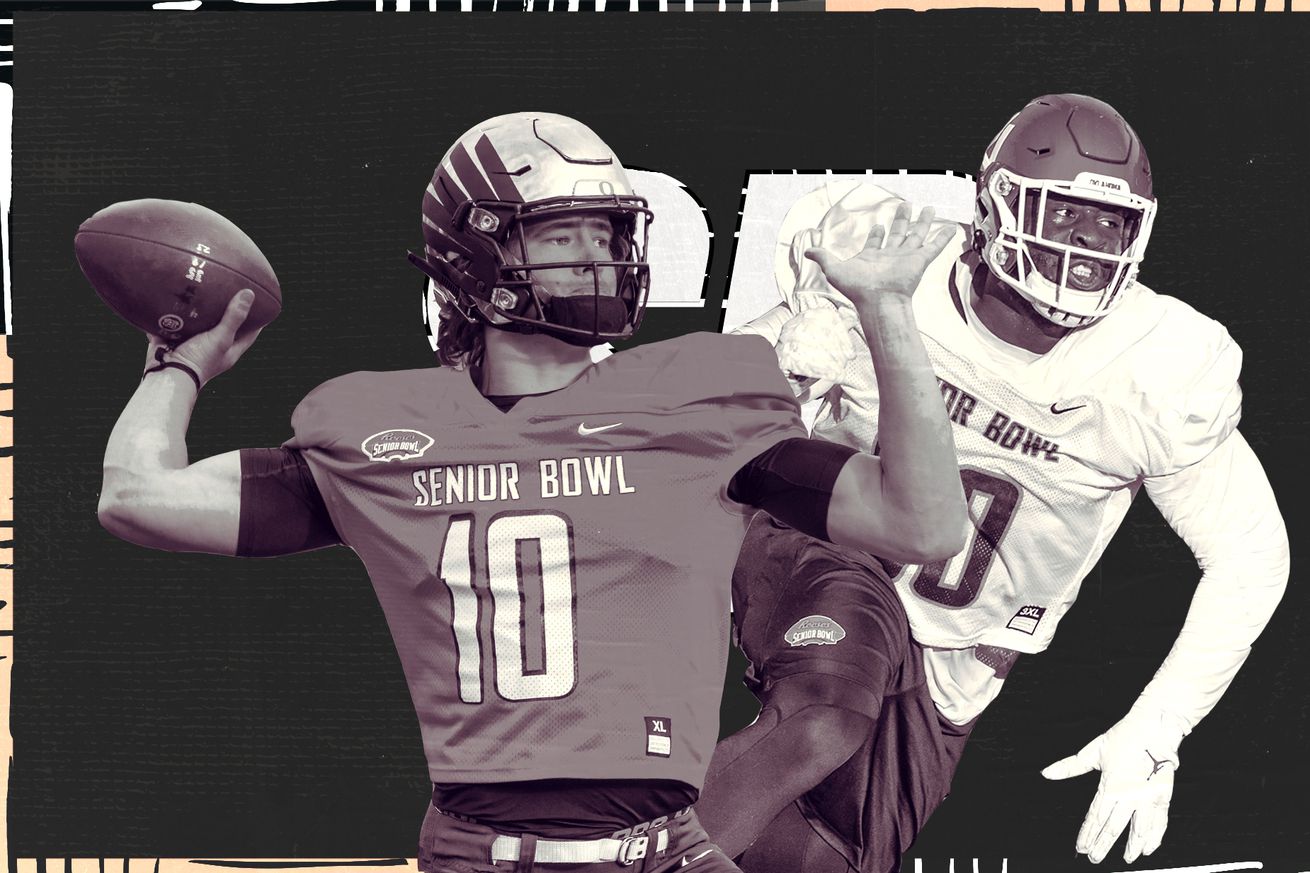 NFL Draft prospects like Justin Herbert and Neville Gallimore are taking part in the 2020 Senior Bowl.

The Senior Bowl is loaded this year with everyone from small-school standouts to big-name QBs.

The Senior Bowl in Mobile, Alabama, is one of football’s most hectic and strange weeks. It begins with a creepy weigh-in sandwiching a few days of practices, before ending with a meaningless game.

Still, it’s one of the premier events in the run up to the 2020 NFL Draft. Every year, prospects help (or hurt) their draft stock with a good week of practice or a breakout performance in the Senior Bowl.

With that in mind, here are 20 players to know in this year’s event.

4 quarterbacks to keep an eye on

It was sort of surprising seeing Oregon quarterback Justin Herbert participate in the Senior Bowl. Over the years, plenty of top quarterbacks have dropped out of the all-star game, but maybe things are changing. After all, eventual No. 1 pick Baker Mayfield practiced leading up to the 2018 game. Herbert most likely isn’t in contention for the Cincinnati Bengals and the first pick, so he could have just been seeing the writing on the wall regarding his draft stock.

By all accounts, Herbert had a good week of practices. He was lauded for a strong arm that zipped through heavy winds and his ability to place the ball in the right spot.

For his efforts, Herbert was named the best practice player of the week.

Herbert had an up-and-down season at Oregon, and some of that can be blamed on his receivers dropping passes.

The same can be said about Utah State quarterback Jordan Love.

Love is a confounding prospect. His numbers dropped in 2019 compared to 2018, but he also lost most of the offense around him. That included offensive coordinator David Yost, who left Utah State for Texas Tech. According to reports, Love showed some during practices why he’s considered a first-round talent.

After those two, Oklahoma’s Jalen Hurts, this year’s Heisman runner-up, is the biggest name. But Anthony Gordon of Washington State is the more interesting player.

Gordon started only a season for the Cougars while sitting behind walking meme Gardner Minshew. Gordon’s 2019 stats are eye-popping. He put up 5,579 yards and 48 touchdowns, with 570 yards and nine touchdowns alone coming against UCLA.

While the quarterbacks get most of the attention, there are some big-name prospects at other positions in the Senior Bowl.

Unquestionably the top player participating this year is South Carolina defensive lineman Javon Kinlaw. In the weigh-in session to start the week, Kinlaw starred with an 84-inch wingspan on his 6’5 and lean 315-pound frame. Yes, that is extremely strange to write, but it’s part of draft season. Kinlaw is a possible top-10 pick and did nothing to hurt his status.

Auburn’s Marlon Davidson is another big defensive lineman who didn’t disappoint. Look at what he can do at just under 300 pounds:

Another part of draft season is skyrocketing offensive tackles. We’ve seen it annually. Last year it was Andre Dillard and Tytus Howard jumping into the first round. This year, Houston’s Josh Jones could become a hot name, starting with a standout week of practices. Jones is known for his quick feet, but he got plenty of attention for violent, powerful hands.

josh jones is on another level

Football all-star games are typically bad settings for safeties because the setting neuters their aggression in the secondary and doesn’t allow them to blitz. That’s why California’s Ashtyn Davis didn’t grab a ton of headlines this week He’s still a potential top-100 player.

The 2020 draft is a good one for tight ends, and one of the best ones is participating in the Senior Bowl. Vanderbilt’s Jared Pinkney is a likely top-100 pick as well, but he was injured much of the season and had just 20 receptions.

Florida pass rusher Jonathan Greenard is another player who struggled this season with injuries. Still, in his only season at Florida after transferring from Louisville, Greenard had 9.5 sacks.

Arizona State wide receiver Brandon Aiyuk was a late scratch at the event, unfortunately. A lingering injury sidelined Aiyuk from the event, but he still weighed in an eye-catching 81-inch wingspan. Aiyuk has top-50 buzz, and if teams are looking for their own Deebo Samuel, he fits the bill this draft.

5 players who had a breakout week

These players all turned heads in Senior Bowl practice this week.

The Senior Bowl has been kind in the past to wide receivers. Terry McLaurin started building his draft stock at the Senior Bowl last year and looks like a budding star in Washington. Fellow Ohio State wide receiver K.J. Hill is on the same trajectory. After a sort of ordinary season of 57 receptions for 636 yards, Hill’s draft process is critical. Catches like this one help:

Baylor’s Denzel Mims is another receiver who impressed during the week. Look at him pull in this one from Love:

Mims should be a good mid-round pick up for a team looking for a speed receiver who just happens to be nearly 6’3. Mims has all the makings of being a draft gem.

Florida’s Van Jefferson, another wide receiver, got his share of plaudits as well.

Here’s what The Ringer’s Danny Kelly wrote about Jefferson in his Senior Bowl recap: “At 6-foot-1, Jefferson played bigger than his weigh-in weight of 197 pounds, putting on a route-running clinic while using quick footwork to sink his hips and make sharp cuts to gain separation.”

LSU’s Kristian Fulton and TCU’s Jeff Gladney accepted their invites to the game, but dropped out late. That left the cornerback position a little light in talent.

Notre Dame’s Troy Pride had a strong week after underwhelming at the weigh-in with relatively short arms (31 3/8 inches) and wingspan (73 3/4 inches). On the field, though, he was praised for his toughness and ability to play the ball.

#NotreDame DB Troy Pride vs. #OhioState WR KJ Hill should be on pay-per-view. Great weeks for both of them #SeniorBowl pic.twitter.com/7Eeu56zNsQ

It’s also sort of strange to say a player from the national title-winning LSU team had a breakout performance, but that’s the case for center Lloyd Cushenberry. That’s as much to do with the other players at his position than anything else. Wisconsin’s Tyler Biadasz didn’t have quite the season many expected and Oklahoma’s Creed Humphrey returned to school. Both of those things help Cushenberry’s draft stock.

This type of block helps too:

Lloyd Cushenberry with a very nice Rep against Javon Kinlaw…#SeniorBowl

4 small-school players who stood out most

At the 2015 Senior Bowl, hardly anyone heard of guard Ali Marpet going into the week. By the end of the week, the Hobart College blocker was flying up draft boards and eventually became a second-round pick by the Tampa Bay Buccaneers.

Liberty wide receiver Antonio Gandy-Golden could be another relatively no-name player who turns into a household name after a strong Senior Bowl week.

“(Gandy-Golden) made several terrific toe-tapping, high-point grabs in the corner of the end zone against multiple corners and used his strong hands and good body positioning to win on slants and in-breaking routes,” Yahoo Sports’ Eric Edholm wrote in his Day 3 winners post.

Dayton tight end Adam Trautman has been a favorite of #DraftTwitter for much of the season, and he got to show why during Senior Bowl week.

The guy everyone seems to want to see this week

Trautman was first introduced to many by The Athletic’s Dane Brugler, who put the Flyer well inside his recent top 100 at No. 72.

I am a HUGE Adam Trautman fan (Dayton TE). He has a really good feel as a route runner and he’ll more than hold up in the run game. pic.twitter.com/zaTuBXzobf

Another small-school prospect people have been excited about since the preseason is Lenoir-Rhyne safety Kyle Dugger. He made the acclaimed Freaks List from Bruce Feldman, and you could see why in Mobile.

Looking for an even deeper sleeper? How about St. John’s offensive tackle Ben Bartch?

St. John’s (MN) OL Ben Bartch is an underrated prospect who has done well against an uptick in competition at the #SeniorBowl.

Was a tight end just two years ago, but you couldn’t tell based off of how strong and refined he looks.

The former tight end could be a nice Day 3 pickup in the draft.