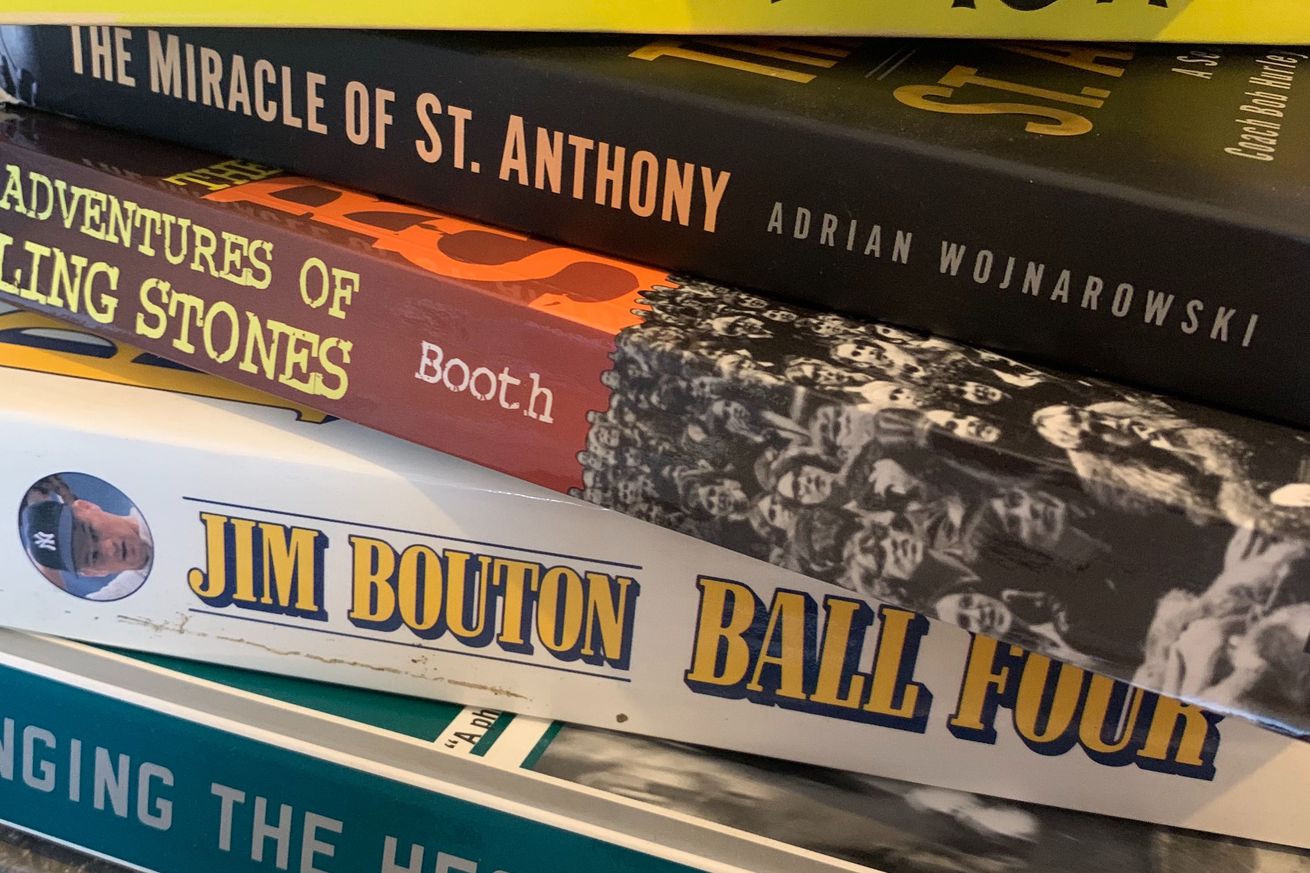 From ‘Ball Four’ to ‘Out of Sight’, here are a few books you can come back to over and over again

I love my books. They have traveled with me across the country and back again, prominently displayed in cheap bookcases throughout dozens of apartments around the Northeast. Currently, they are stretched out behind me in my home office where they will stay until the time comes to move off the grid. They will follow me there, as well.

I have read all of them at least once and several of them dozens of times. During periods of my life when I was without human companionship they were literally my only friends. That’s not said for sympathy. The life of a newspaper sportswriter in the 90s and early 2000s involved shitty hours and weekends, which pretty much negated any hopes of having a social life.

Through it all, my books were there for me. They demanded nothing but my time and gave me hours of entertainment.

I’m not particularly proud of my collection. There is very little literature to be found and only a handful of what one might refer to as great works. It mainly comprises sports books, rock star biographies, and a nearly complete set of Elmore Leonard novels.

Most of them are several decades old because I had to stop buying books at some point when I began to run out of room. I’m not linking to them because you can hopefully find an independent bookstore near you that would be thrilled for the business. Do them and humanity a favor.

Here are some of my favorites.

The Breaks of the Game: David Halberstam

This is the monster of all sports books, the one against which every basketball book is competing with in one way or another. If you know nothing of the NBA pre-LeBron James, this is where you should start. It’s a window into what feels like another universe, when pro basketball was a cult sport struggling for survival.

I wrote about this one at length and won’t belabor the points I made back before the world came to a screeching halt. If you can’t get into the stories contained within these pages, I frankly don’t want to know you.

It’s an exaggeration to say every person who heard the first Velvet Underground album went out and formed a band, just as it is to suggest that every writer who consumed FreeDarko wound up writing about basketball on the internet. But almost everyone who did was influenced by them.

Long before he was the great and powerful Woj, the author spent an entire season with Bob Hurley’s St. Anthony Friars. It’s a masterful bit of storytelling that for my money is the absolute best of the surprisingly robust sub-genre of books about high school basketball.

Other contenders include The Last Shot by Darcy Frey, Fall River Dreams by Bill Reynolds and In These Girls, Hope is a Muscle by Madeleine Blais.

Judging from the early reactions to the gigantic Bulls documentary, it’s quite clear a lot of you should get familiar with the source material. Smith’s book was shocking upon its release because it dared show Michael Jordan as he really was, without the buffed out Nike shine. It holds up, clearly.

Halbertsam’s Playing for Keeps picks up the story in 1998 and provided much of the narrative structure of the first two episodes.

Heaven is a Playground: Rick Telander

An all-time classic set on the courts of mid-1970s Harlem during a long, hot summer. There are a lot of books that tried to get at the soul of basketball, but this is the standard bearer. I’d really like to know whatever became of Sgt. Rock.

Others in this vein include The City Game by Pete Axthelm, Pacific Rims by Rafe Bartholomew and Big Game, Small World by Alexander Wolff.

The best athlete autobiography of all time.

Lords of the Realm: John Heylar

The inside story of how baseball owners conspired for almost a century to suppress salaries while refusing to integrate. It’s shocking how buffoonish management acted during the glory days of the national pastime. Required reading.

Marvin Miller’s A Whole New Ballgame is a worthy companion piece, as is Bill Veeck’s delightful, Veeck as in Wreck.

Scandalous upon its release in 1970, Ball Four contains the best line ever written in any sport book: “You see, you spend a good piece of your life gripping a baseball and in the end it turns out that it was the other way around all the time.”

I read Ball Four for the first time in fifth grade and immediately taught my classmates the words to “Proud to be an Astro”:

Now, Harry Walker is the one who manages this crew

But when we win our game each day,

Then what the fuck can Harry say?

It makes a fellow proud to be an Astro

There is nothing more soul-crushing than spending an entire season with a bad team. Shropshire covers three hilariously inept campaigns with the Texas Rangers, who as then-manager Whitey Herzog noted: “Defensively, these guys are really sub-standard, but with our pitching it really doesn’t matter.”

Ladies and Gentlemen, the Bronx is Burning: Jonathan Mahler

An underrated late addition to the pantheon that tells the story of the 1977 Yankees amid the backdrop of a city gone to hell.

You will notice there are few books in my collection about modern baseball. There’s a reason for that. The vast majority of them are peans to the wonders of middle management and therefore boring as hell.

The incredibly bizarre — and largely forgotten — story of how the mob tried to gain influence in pro football via a pair of shady agents named Norby Walters and Lloyd Bloom. Good luck finding it.

You may recognize Bowden from such masterworks as Black Hawk Down and Killing Pablo. You probably don’t remember that he spent a year with the Eagles after the death of Jerome Brown. As honest and unflinching a look at pro football as you will ever find.

The only piece of sports fiction on my list is not so fictional at all. Gent’s thinly-veiled account of his own life as a receiver for Tom Landry’s Cowboys is shocking and brutal and sad and poignant. I make time to read it every year.

I used to have more football books, back when I cared about the sport.

Fear and Loathing on the Campaign Trail: Hunter S. Thompson

The Vegas one is more popular and Hell’s Angels is a stronger work of reportage, but for a dose of pure Gonzo insanity, this is the book I come back to more often than not.

The Boys on the Bus: Timothy Crouse

The companion piece to Thompson’s lurid account, Crouse plays it straight and lays bare the bullshit facade of campaign reporting. Almost 50 years later, we have still learned nothing.

Details the glory days of Sports Illustrated, reading it now feels like an obituary. It was fun once, this business of writing about sports.

My favorite book of the last few years, Jarnow takes us on a bizarre trip through the byzantine world of psychedelic drug networks connecting it through the career of the Grateful Dead and into modern-day Silicon Valley. I’m waiting for the followup on Dealer McDope.

Not music, but as a companion piece, Nicholas Schou’s Orange Sunshine tells the even-crazier tale of The Brotherhood of Eternal Love, who took over the LSD trade and invented hash smuggling by stuffing surfboards with primo Afghani hash and shipping them back to California.

The True Adventures of the Rolling Stones: Stanley Booth

Reported while on tour with the Stones at the height of their powers circa Let it Bleed, Booth took 15 years to write the damn thing. By then the Stones were already an anachronism. It’s all there, though. Sex, drugs, more drugs, and unbelievable access to the biggest rock ‘n roll band in the world.

This Wheel’s on Fire: Levon Helm with Stephen Davis

In which Brother Levon disembowels Robbie Robertson and exposes the lie at the heart of The Band. Robbie took the songwriting credit and all the money.

Astonishingly good read that is best consumed with Charlie and his brother Ira playing low in the background.

Lester is an acquired taste and not all of his ramblings hold up. I will always love him for despising Jim Morrison and completely nailing what made Black Sabbath important. Spoiler: They were moralists like William S. Burroughs.

The definitive oral history of punk rock, an essential document of a scene that launched a thousand mediocre bands and the Ramones, who ruled.

A tour-de-force biography of Neil Young that loses steam toward the end when McDonough makes himself the subject. The stuff about Neil’s bizarre 80s period and his relationship with his son is heartbreaking.

Our Band Could Be Your Life: Michael Azerrad

Pretty much everything you need to know about bands like Mudhoney, Black Flag and Mission of Burma who wove together the musical underground through a patchwork collection of local scenes back when something like that was still possible.

You can’t go wrong with anything Leonard writes, but Out of Sight is as good a place to start as any.