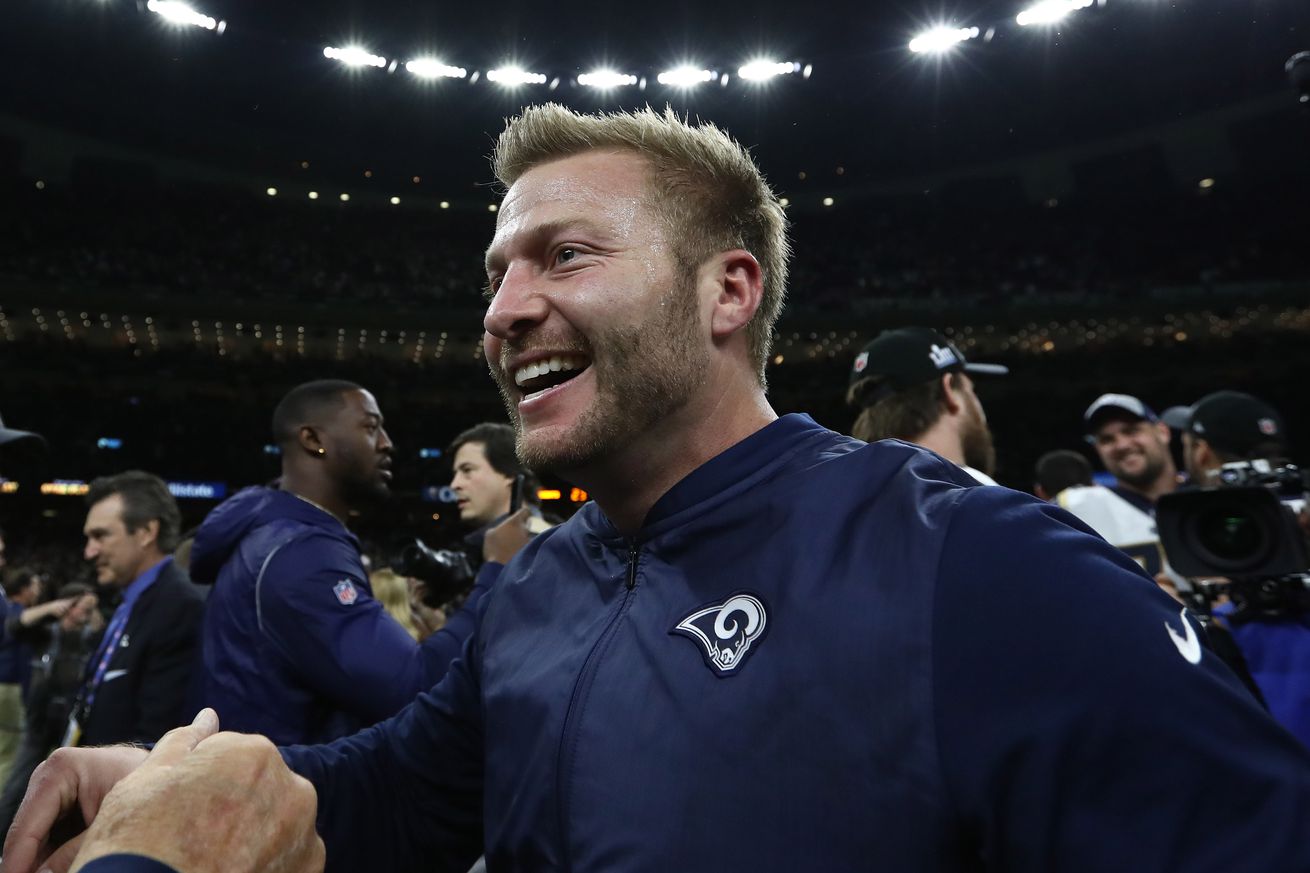 The Rams went big this past offseason, and the rest of the league took notice.

When it comes to the bigger picture, the NFL goes through phases. Dynasties are built and toppled, and rules change and have an effect on what kind of offenses or defenses are successful. Yet there’s one phase that will never go away: bandwagoning the latest trend.

And the Los Angeles Rams may have found the latest big one.

The Rams went big this past offseason, and it paid off with a trip to Super Bowl LIII against the New England Patriots. This is a franchise that knew it had to do one thing: acquire talent as quickly as possible to take advantage of an extremely strong and young core.

It soon became clear that their moves worked early when the Rams started the season red hot. It’s a copycat league, so the 31 other general managers likely took notice. While the Rams didn’t invent the concept of stacking their team with stars for at least one Hail Mary season, they sure look to have perfected it.

Aaron Donald and Todd Gurley — with well-deserved contract extensions. Then, they went out and acquired some serious veterans. Like a lot of them.

Either through free agency or via trade, here’s who they added the past two offseasons:

Cooks, Peters, Talib, and Fowler were all landed via trade, mostly involving high draft picks. That may prove to be costly for the Rams in future drafts, but they went in hard on veteran talent for one reason: to win a championship.

If the Rams can do just that in the Super Bowl, you can expect a lot more wheeling and dealing around the league, from even the most moderate general managers.

Sean McVay is a prodigy. At 33, he’s the youngest coach in Super Bowl history and he was the youngest hired when the Rams brought him in two years ago. McVay was aggressively targeted by the Rams, a franchise that was fed up with the 7-9 bullshit that comes when you allow Jeff Fisher to coach a football team. They gave McVay the power to build his team and run his offense, which is built on malleability and is tailored specifically to his personnel.

He won NFL Coach of the Year his first year and got his team to the Super Bowl the next. His success has helped usher in a trend of younger, innovative minds. Last year it was Matt Nagy with the Bears. This year it’s Freddie Kitchens and a few names from McVay’s own coaching tree (reminder: he just turned 33 and has a coaching tree!). His quarterbacks coach, Zac Taylor, will be hired by the Bengals while his former OC Matt LaFleur replaced Mike McCarthy in Green Bay. When the Cardinals brought Kliff Kingsbury, they even listed him as a “friend” of McVay’s.

For the foreseeable future, teams will be searching for the next McVay. You can double or triple that sentiment if the Rams win the Super Bowl.

3. Forget about the preseason

It goes deeper than just signing and trading for all the top players. McVay knew he could not have any of his newly acquired stars suffer injury. In 2018 alone, the preseason saw injuries like a torn ACL for Derrius Guice, a torn Achilles for Jason Verrett, and a torn MCL and dislocated patella for Daryl Williams.

Not only did McVay keep nearly all of his starters out for the ENTIRETY of the preseason, the Rams took it easier in practices, limiting injuries. None of the players who started the season on injured reserve were starters.

As a result, the Rams looked fresh and eager out the gate and won their first eight games, not losing until they ran into a formidable Saints team in Week 9.

Resting your starters in the preseason doesn’t guarantee everyone is going to be healthy all season — as players like Gurley, Copper Kupp, and Greg Zuerlein have all dealt with injuries. But those didn’t occur in the preseason. Teams can mitigate the risk by, say, not playing stars in meaningless games.

Given how many teams were absolutely besieged by injuries this season — the 49ers and Packers had 35 players on injured reserve combined this season — there are a lot of people evaluating their training staffs at the moment.

But the Rams didn’t invent this trend. The Eagles just did it, too

As I said, it’s a copycat league, and while the Rams took the formula of going all-in a step further, they were also following the example set by the Eagles, the defending Super Bowl champions. Rams general manager Les Snead even admitted as much in an interview with Peter King before the regular season got underway.

“I got a simple rule,” Snead said. “You can’t be scared in this league. Look at Doug Pederson this year and, it wasn’t reckless but it took courage and guess what? They won a Super Bowl.”

The Eagles took advantage of Carson Wentz being on a rookie contract, added some veterans like Timmy Jernigan and Jay Ajayi via trade, and beat the Patriots in the Super Bowl. They even had a young(ish), offensive-minded coach who got them there his second year in Pederson. The Rams took their blueprint and turned it up to 11.

If the Rams win the Super Bowl, you can bet to see more teams take much bigger risks — and that could make for an eventful offseason in the NFL.