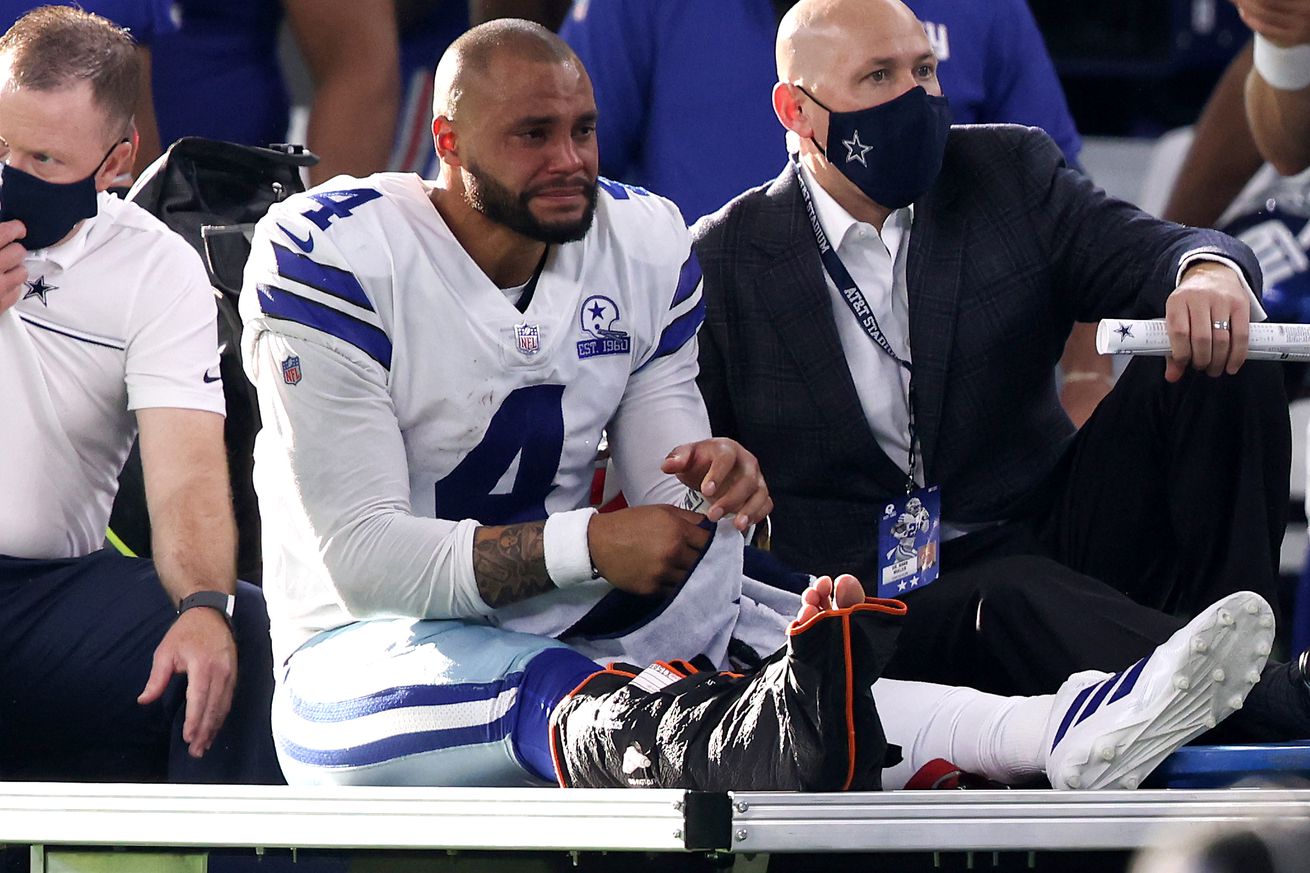 The franchise tag is so dumb.

No discussion of the NFL can begin this week without first talking about Dak Prescott. The injury to the Cowboys quarterback is easily the biggest on-field disaster of the 2020 season thus far — and it’s intensified by the fact he’s playing under the franchise tag this season. Now his season is over. Prescott’s compound ankle fracture will require significant recovery time, and he’s without a long term deal.

The franchise tag is unquestionable the most unfair element of the current CBA. Allowing teams to hold players for a season without a safety net, in order to judge whether they’re worthy to receive a long-term deal is a ludicrous notion in a league that’s already so owner-friendly. The Cowboys were foolish for not believing in Prescott before 2020 negotiations, and despite their early failings this year, Prescott was playing some of the best football of his career.

The 27-year-old quarterback gave everything to the Cowboys, and his reward was a lack of faith and the tag. Dallas knew Prescott’s nature would lead him to signing the tender and starting the season. Sure, he got paid a lot for signing the franchise tag — but it’s nothing compared to the signing bonus and security that would have come from a new contract he deserved.

This isn’t a condemnation of the Cowboys, not really. They were within their rights to stick him under the tag and wait, even though it’s pretty ridiculous they needed more evidence he could be the guy. However, this is one of the most prominent examples of why the tag has to change under the next CBA. No one year payment, not matter how high, is worth the long-term damage to a player’s earnings. Especially when they have no control of the situation.

Prescott can come back from this. Many quarterbacks have come back from worse, but it underscored just how brutal the NFL can be. It doesn’t matter if you’re a Cowboys fan or not, everyone who saw his face after that injury should have gotten emotional from it.

The Carolina Panthers have been a huge success so far this season. Sure, on paper 3-2 might not seem that impressive — but this was a team that limped its way to a 5-11 season a year ago. Furthermore, the Panthers haven’t played a soft schedule outside of their win Sunday over the Falcons. Three of the team’s games have come against .500 teams or better, and each week the team looks better than the last.

Inside of this success head coach Matt Rhule remains one of the most fascinating case studies in the NFL.

Rhule is following in the new mold of college coaches jumping to the NFL, trying to install successful college offenses in the league and see them pay dividends. Kliff Kingsbury is doing it in Arizona, and now Rhule is showing it can work as well. The Panthers utilize an incredible amount of pre-snap movement to confuse zone defenses, and this is proving success quickly. It also doesn’t feel like a flash in the pan way to run an offense either, unlike Chip Kelly’s initial success with the Eagles.

Of course, it helps that Teddy Bridgewater is playing incredibly well, the young Carolina receivers are putting in work, and top-to-bottom this roster seems more energetic than it has in years.

Realistically this team is a year or so away from really competing, but if this trajectory continues they’re going to be a team to watch. Perhaps the most bizarre element to Carolina right now is that the team’s decision to sign Christian McCaffery to a mammoth deal might be the move they end up regretting the most. The Panthers are passing the ball more than ever, and excelling without McCaffery on the field. It shows how little elite running backs really make a difference in the scheme of things.

It wasn’t that long ago that the NFC East was the model of success in the NFL. Year in, year out you could rely on the East sending a legit contender to the playoffs, sometimes two. The aforementioned injury to Dak Prescott really underscored how sad this division has come.

The Cowboys are leading with a 2-3 record, and now have the exciting play of Andy Dalton to look forward to. Ooooooooooooof.

It’s been super easy to sleep on the Browns. The season opening flop against the Ravens set the tone to overlook Cleveland, but now for the second week in a row the Browns have put up a quality win against a quality opponent.

Baker Mayfield is playing far from perfect football. In fact, he’s barely on pace to pass 3,000 yards passing this year — but it’s a testament to the talent the Browns have on both sides of the ball that they’re able to keep winning despite not getting elite production from the quarterback position.

Jarvis Landry and Odell Beckham Jr. are fast becoming the most dangerous receiving tandem in the NFL, and when paired with solid tight end production from Austin Hooper the offense is ensuring there are plenty of threats on the field at any one time.

Of course, none of this would really be possible without a good defense — and that’s coming to play as well. While not a stingy defense yards and points wise, Cleveland in excelling at making plays. The Browns are an NFL-best +6 in turnover margin, which really tells the story here.

Next week will be a major test against Pittsburgh, but if the Browns win, watch out. They’re going to be getting a lot more attention.

It takes an unprecedented amount of skill for a professional football player, who has presumably been holding a football most of their adult life, to botch a spike so badly it looks like a baseball pitch. Keep working on that spike, Goff.

One day you’ll get it.

There’s a micro and a macro to Fitzmagic happening on Sunday. The short-term, obviously, is that getting a win over the 49ers is supremely impressive. The macro is that Fitzpatrick has done it again.

This is a dude adept at floundering for a while, before sprinkling in a performance or two that are so mind-numbingly amazing that another team thinks they should sign him to a massive contract. At this point he’s on his 10th NFL contract. He’s made over $71 MILLION.

It’s the best hustle in the league, and I know he’s going to be able to keep doing this for another 2-3 years. Only a true Harvard man is able to show those kind of smarts. I haven’t seen a genius fleece the silver-spoon elite like this since the Winklevoss twins let Mark Zuckerberg steal Facebook.

Loser: All of New York

There’s something that makes me all warm and fuzzy knowing the Jets and Giants are both 0-5. Don’t get me wrong, it’s not that I want to laugh at these teams — because they do a good enough job garnering laughter without my help. It’s more that it shows the beauty of parity in the NFL.

In every other sport New York is able to either out-spend, or out-attract almost everyone else. Of course, this often doesn’t equate to success **cough, Knicks** but the potential is there. In the NFL it just comes down to how well you draft, coach and play. Both these teams stink out loud. It’s ridiculous, it’s beautiful, and we should own it.