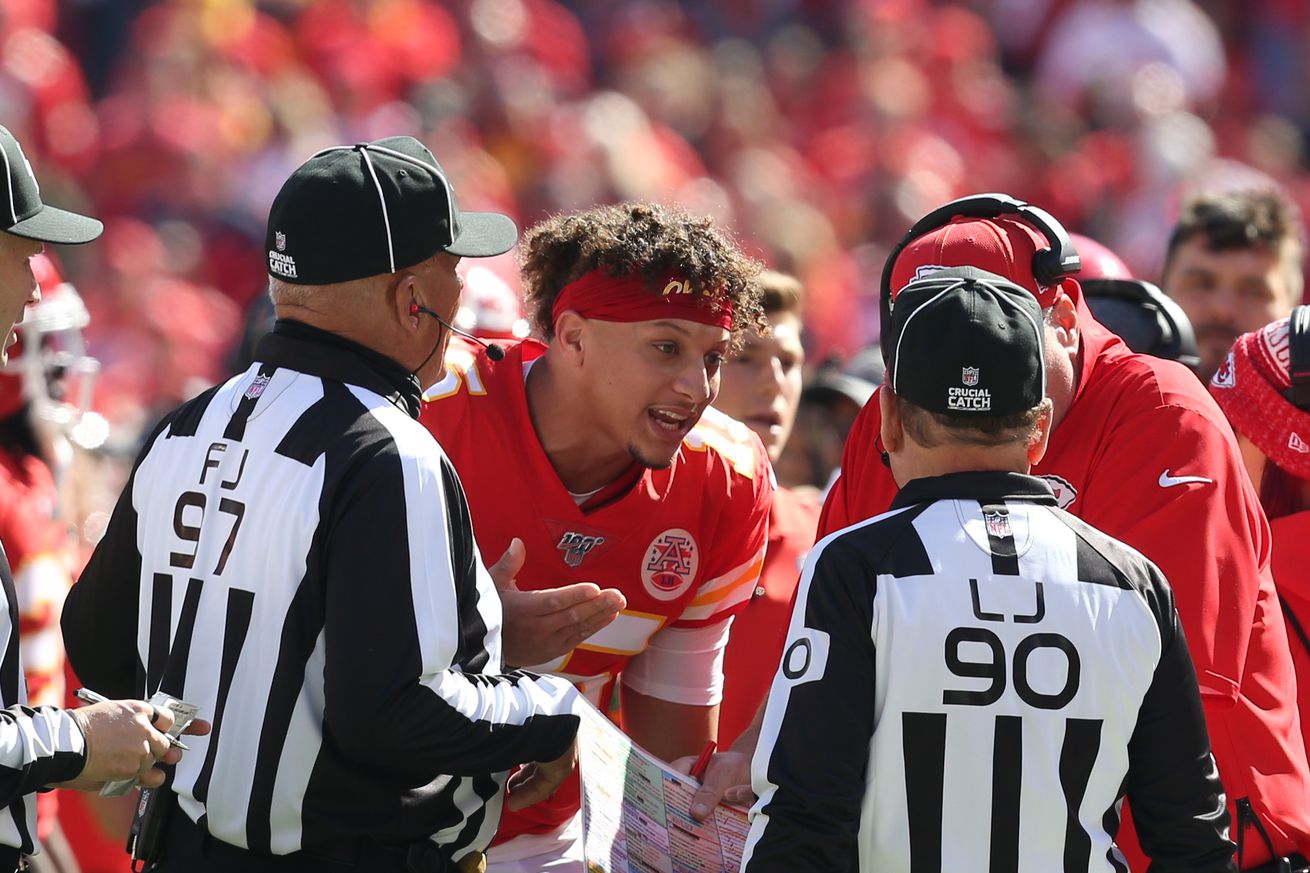 Retired NFL lineman Geoff Schwartz doesn’t like to blame the refs, but he says changes have to be made. Here’s where to start.

This is something I was hoping I didn’t need to write. If you’ve read my articles before (thank you and welcome if you’re new) you would know I’m strongly against blaming the officials for a loss. I’ve been willing to cut the refs some slack for errors.

It feels like that time is over. Changes have to be made.

The games through the first six weeks of the season have been outstanding. We have plenty of teams still in the hunt for a playoff spot, with no clear-cut No. 2 team in the AFC and no favorite in the NFC. Ratings are up around the league and people are enjoying the product on the field. However, there’s one topic that people are discussing nonstop: the officiating. When that’s the case, the league has a problem.

I have a few possible solutions to fixing things. I’ve put them in order from the ones I’m most in favor of to the one I’m most unsure about.

People have long griped about the officials. That’s nothing new and it will continue far longer than I’ll be watching football. The complaining has gotten worse this season after the NFL decided to review pass interference calls for the first time as an overreaction to the blown call in the NFC Championship Game. At the time, I praised the decision but also warned the bar to overturn the call on the field, whether it was from a pass interference or no interference, would be so high that it would rarely happen. This new procedure was put in place to fix egregious errors, like the ending of the Rams-Saints game.

And that’s been the case so far:

No @NFL coaches have won challenges for pass interference calls or no-calls in Week 6. The original call has been upheld on 24 of their past 25 PI challenges, per @ESPNStatsInfo. Not saying it’s fair or right, but they’re just wasting timeouts and challenges at this point.

It appears the NFL has realized making judgment calls reviewable was bad business, so it’s started to adjust before this new procedure gets predictably tossed out this offseason. And this is why it’s not been done in sports before. Major League Baseball reviews whether someone was safe or out. Black and white. The NBA reviews out-of-bounds, goaltending, shot clock violations, and other calls with little gray area.

The goal of review, in my opinion, is fixing oversight errors. With pass interference, you’re reviewing a judgment call, often in super slow motion, which isn’t how the game is played, something I agree with former official Gene Steratore on now:

Reviewing judgment calls, like PI, is slowing the game down and affecting the quality of the product. Let’s get back to football and let the officials apply their judgment in game speed. Watching plays at 10% speed and looking for contact is not how the rules should be applied.

An unintended consequence of the new pass interference rule is more eyes are directly on officiating. Because fans are upset their favorite team challenged what appeared to be an obvious defensive pass interference and didn’t get the call, they are now on high alert to notice every other poor call that was made. Fans start to wonder why the NFL is allowing pass interference to be reviewed but not holding, or hands to face, or everything else. It does feel rather arbitrary to the fanbase of the team that got “screwed” and it leads to more bellyaching.

The NFL has said it won’t make any changes to the pass interference review process until after the season, but the sooner it gets rid of it and allows officials to call these in real time, the better. Some will be missed, but that’s life.

While eliminating the pass interference review would be a good start to building more goodwill with fans and players, it’s not the cure for all officiating woes. Would people still scream at the television and on Twitter about a non-call? Of course. But at least they’d have to accept it, rather than blast the officials for missing it upon review.

We saw this earlier this season with holding calls. The league wanted a certain type of block, the “lobster” block, to be called more frequently. So in the process of looking for lobster blocks, the officials started to flag everything that appeared to be holding. It was slowing down the game and ruining the experience. The NFL smartly decided to reverse this thought process and holding calls have drastically gone down since Week 2, making the product better.

Every time a new rule gets put in place, like illegal blindside blocks, the NFL seems to make it its purpose to call these as strictly as possible, which leads to poor enforcement of the new rule. We saw it in Week 6 in Cleveland:

This was not even close to a blindside block by Jarvis Landry. Refs hate the Browns so much pic.twitter.com/AwsseApyfs

It does feel like a natural reaction to find for more penalties if you’re being asked to look at one specific thing. There needs to be less “rules of emphasis” and more of “just call it if you see it.” I think in officiating, less might be more in this case.

Add a sky judge, but only for non-judgment calls

The sky judge is someone in the booth who’s watching everything in real time, then taking a quick look at a replay before deciding if the call on the field will stand. I’d be for this option if the sky judge only fixed non-judgment penalties that have been called on the field, like hands to the face or targeting. Again, I wouldn’t put pass interference into the sky judge’s decision because it will lead to the same problems we have now.

Also, with a sky judge, it would have to be a quick process, because pace of play is a huge issue when it comes to these reviews.

Do you look at every single penalty? Just imagine this sequence:

Sounds like a blast, right? Y’all would hate that by the fourth time it happened. So what would the job of the sky judge be? That needs to be defined if we head in that direction. Reviewing non-judgment plays would be the start.

The last fix, and it’s something I’ve been against because I’m not sure it would help much, is making all officials full-time. However, I’ve never felt the officials are unprepared for the action. In fact, they seem overprepared. Some people get upset that officials seem to be older and can’t move as much, and if you hire full-time officials, you might get a younger crowd.

I can see the point, but I have a few pushbacks. First, they aren’t throwing a green official onto the NFL field right away. They’d need years in college first. Would the NFL be paying them a full-time salary to work in college? And I also don’t think the job has much appeal outside of a large salary that it would take to attract the best talent the NFL is looking for.

But if the NFL decides this is necessary, I’ll support it. I know fans would as well.

Plain and simple: things need to change. I’d start with the idea that less is more. Fewer penalties overall, fewer reviews overall, and just focus on calling what you see. That would make a huge difference.