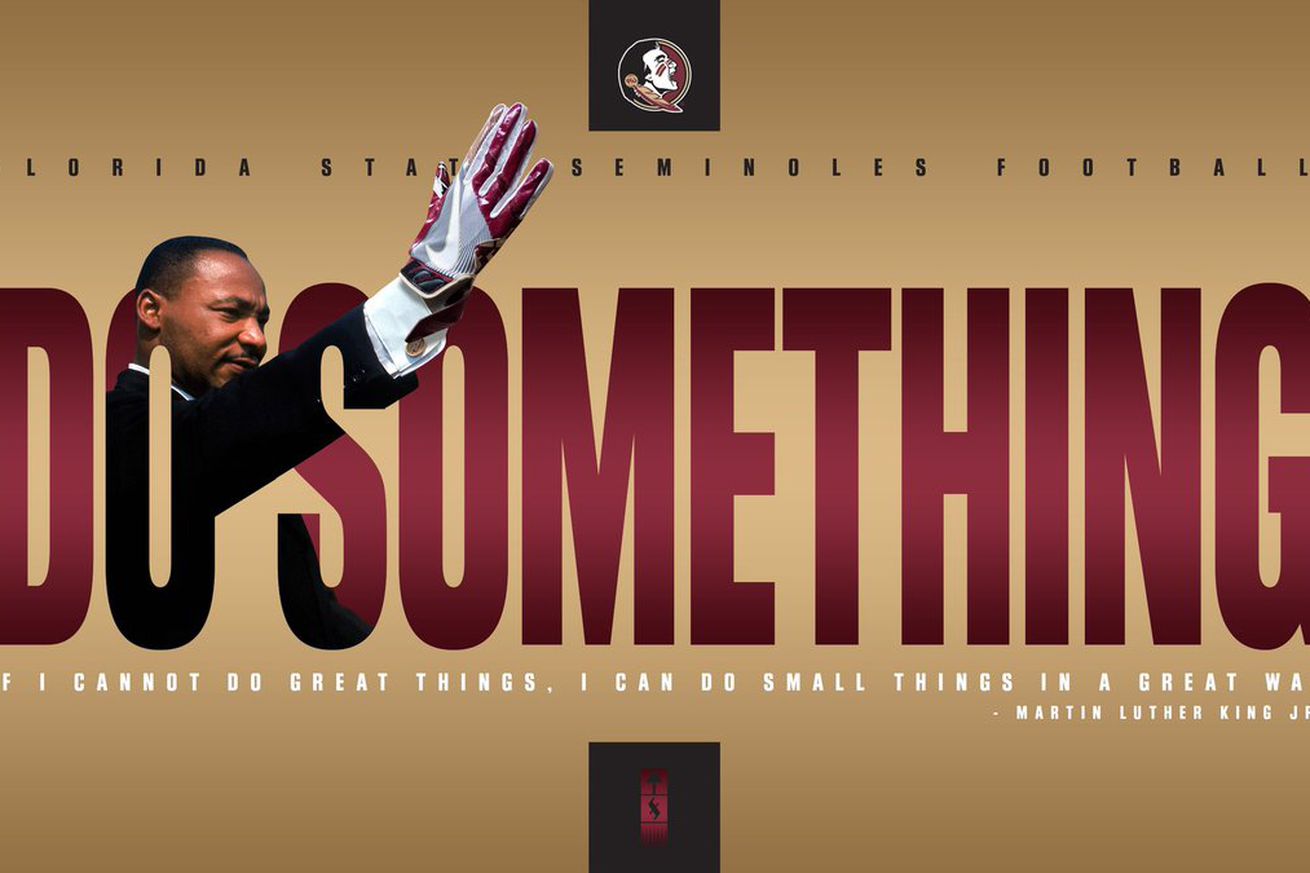 Reducing a man to a meme has effects. FSU’s social media department is yet another reminder of how problematic that can be.

On Martin Luther King Jr. Day, every political, corporate, and sports team Twitter account seems duty-bound to send at least one message quoting or thanking the civil rights icon. College football is very much part of this national mandate.

Most MLK Day tweets by sports teams and coaches are performative but harmless. Then there is this, sent out by Florida State’s recruiting department on Monday:

That graphic, which was deleted after less than an hour of going up, came from FSU’s official recruiting Twitter account shortly before 1 p.m. ET:

#DoSomething is FSU’s hashtag under coach Willie Taggart. It got the Noles widely mocked during Taggart’s first season, when FSU went 5-7 and missed a bowl for the first time in 37 years. Martin Luther King Jr., to be fair, was absolutely a guy who #DidSomething.

This is a problem, though, for a few reasons.

1. They Photoshopped MLK’s hand to make a Tomahawk Chop.

The original picture comes from the March on Washington in 1963, where King gave his famous “I have a Dream” speech in front of the National Mall.

While King’s arm is up in the original photo, it’s pretty clear someone not only added the glove onto his hand, but also photoshopped the hand to point forward so he’s doing the Tomahawk Chop.

You can see and hear the Chop dozens of times throughout an FSU game — or a Braves baseball game, or Chiefs football game. It’s best described as “a rhythmic extension and contraction of the forearm, with the palm open, to mimic the action of chopping.” FSU fans Chop while chanting along with the War Chant, performed by the Marching Chiefs band.

FSU has worked in concert with the Seminole Tribe of Florida to clear its references to indigenous culture. But I will just leave a portion of a Dr. King quote about America’s treatment of indigenous people right here.

“Our nation was born in genocide when it embraced the doctrine that the original American, the Indian, was an inferior race. Even before there were large numbers of Negroes on our shores, the scar of racial hatred had already disfigured colonial society. From the sixteenth century forward, blood flowed in battles of racial supremacy. We are perhaps the only nation which tried as a matter of national policy to wipe out its indigenous population. Moreover, we elevated that tragic experience into a noble crusade. Indeed, even today we have not permitted ourselves to reject or to feel remorse for this shameful episode. Our literature, our films, our drama, our folklore all exalt it.”

It’s safe to assume that King wouldn’t have been a fan of co-opting indigenous culture to support a sports team.

FSU’s account is not the only one to put King’s likeness next to a Nike brand mark. Carolina put the Jordan Brand logo on its MLK graphic:

And Alabama had King looking right over a swoosh:

Some accounts have Nike logos on every graphic.

But Nike has run afoul of child labor standards in the past and still draws criticism for how it treats workers. King’s anti-capitalist statements suggest he’d be against being linked to the company:

I imagine you already know that I am much more socialistic in my economic theory than capitalistic. And yet I am not so opposed to capitalism that I have failed to see its relative merits. It started out with a noble and high motive, viz, to block the trade monopolies of nobles, but like most human system it fail victim to the very thing it was revolting against. So today capitalism has outlived its usefulness.

3. There are plenty of ways to do the MLK meme thing (if you must) without doing that.

And other people in different parts of FSU’s athletic department showed how to do it with the same picture Alabama used.

Honoring the life and legacy of Dr. Martin Luther King Jr., whose dreams of peace, equality and freedom made our nation stronger. #MLKDay pic.twitter.com/wW5f4gZEid

The head coach tweeted this:

If you can’t fly, then run,
if you cant run, then walk,
if you cant walk, then crawl,
but whatever you do,
you have to keep moving forward
-Martin Luther King, Jr.#MartinLutherKingJrDay⁠ ⁠ pic.twitter.com/49yDIXjdO4

4. It shouldn’t be lost that FSU has a trailblazing black coach who is actively dealing with racist bullshit.

It is doubly disappointing that a program that has Willie Taggart — the first black head football coach in FSU history — as its most public employee would fumble this.

In late November, following his disappointing first season, someone Photoshopped Taggart’s face onto a picture of multiple people being lynched and posted it to Facebook. The person who made the graphic got fired from his job, and a state attorney opened an investigation into the incident. FSU’s president swiftly came to Taggart’s defense.

This recent history takes the act of cheapening King’s legacy with branded memes to another level of disappointment.

The ideals that King stood for didn’t end with his death, and the hatred he fought still burns. To be tone-deaf enough to send this graphic out like FSU did, amid the context of what the program is already dealing with, is certainly #doing … something.

But it’s not a good thing.