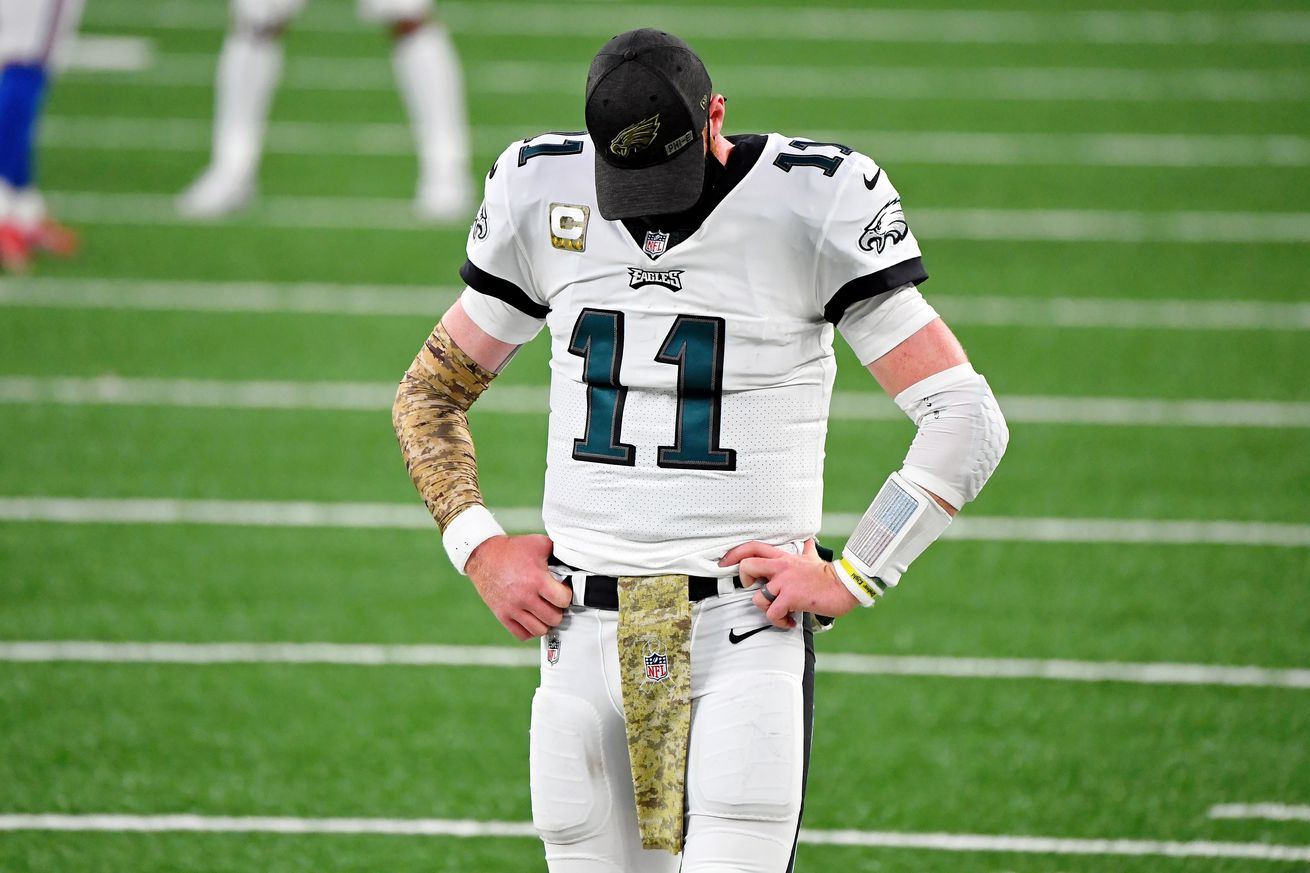 The Eagles had everything in their hands, and totally blew it.

There is no situation, no timeline, no parallel reality where we can call the Eagles ‘winners’ this season. Sure, there’s the literal sense, a bad team with a 3-5-1 record struggling to win games. That’s the boring part of this whole affair. The crushing disappointment comes from the realization of just how easy it would have been for Philadelphia to win the NFC East this season and head to the playoffs, and watch them completely botch the opportunity.

If you looked at the division prior to the season there was a well-established pecking order. Dallas would likely win, perhaps the Eagles could surprise and sneak into a wild card spot, then the Giants were a hot mess, and Washington a hotter mess. We don’t lean on the NFL for predictability, but at least we assume things will make sense.

Nothing in the NFC East has made sense in 2020, but least so the Eagles. This was typified on Sunday by losing to the Giants by 10 points. Die-hard fans are screaming right now, pointing out that Philly is still first in the division. Realists are accepting just how bad the team is this year, while appreciating that at this point losing is the single best move the Eagles could make, rather than continue to limp along under the façade this team is good.

Sure, Zach Ertz is out — and that is a mammoth blow to the offense. In 2019 he was the team’s top receiver, as well as Carson Wentz’s safety valve. Look around the rest of the division and it’s far worse. Washington are playing hot-potato with their quarterbacks from week to week, the Giants don’t have Saquon Barkley, and the Cowboys, well, it’s a miracle they even have a team to field from week to week at this point.

The biggest single reason Philadelphia is struggling isn’t attributable wholly to Ertz being out. It’s that Wentz has suffered out of the most pronounced performance declines in recent memory.

The cruel twist of all this is that running back Miles Sanders is playing much better than he did in 2019, improving his yards-per-carry up to 6.1 on the season, second in the league among running backs only to Nick Chubb. This is something the Eagles should have been able to capitalize on, but they haven’t been able to put a solid offense together — ranking in the bottom third in yards per game, and points per game.

In short: The Eagles had so much promise this season, and instead are basically Sideshow Bob stepping on rakes.

Nobody in the NFL was in more need of a signature win than Cam Newton. Sure, beating the Ravens was a must-win in terms of hoping to keep New England’s slim playoff chances alive, but more importantly on a personal level Newton is trying to earn another contract.

It’s probably hasty to pin this bounce back on Covid, but it’s pretty remarkable how different Newton has looked in the past two weeks. Granted, the Patriots said they were retooling the offense to take advantage of the quarterback’s skills, but things still feel different.

It was easy to hand wave away last week’s outing against the Jets as performing against a bad team, but the Ravens have one of the best defenses in the NFL. Not only are they Top 5 in yards allowed, but lead the league in preventing points, giving up a stingy 18.3 per game.

While Newton’s stats don’t burst off the page (118 yards passing), he still completed 76.5 percent of his passes, throwing for a touchdown and running in another. It might be too late to salvage the season, especially in a division with Buffalo and a surging Miami team, but now Newton is playing to prove he deserves another look. Games like the one he had against Baltimore show he’s worthy.

This was a huge week for Seattle, and it went wrong. Granted, the NFC West is brutal — but that’s kind of the problem here. The division is going to come down to the wire, and dropping a game to the Rams was exactly the kind of thing the team had to avoid.

Yes, there’s a three way tie atop the division, so it’s not like Seattle has been eliminated, however the team is now 0-2 against the Cardinals and Rams, putting them third in the division despite everyone sharing the same record. There’s a good chance the Seahawks could be on the outside looking in when this is all done, and if that happened this is going to be a game that defines the season.

Continuing with the NFC West, because it’s frankly the most interesting division in football, Los Angeles got the win they desperately needed. The Rams have been wholly inconsistent this season, far more so than their 6-3 record would show, but just as the Seahawks will regret dropping this week, the Rams might be able to circle this one at the end of the season and say this was a turning point.

The Rams are doing it, despite having no running game to speak of. It’s really pretty remarkable, and a testament to how Jared Goff has managed to put this offense on his back.

Okay, let’s stay with the division. I don’t want to dump on the Niners too badly, because everyone knows they’re dealing with so many injuries it’s a mess. This is just to acknowledge they’re pretty much out of the playoff picture at this point. It would take some tremendous playoff math, and a ton of luck to even sniff the playoffs at this point.

That said, they’d still be leading the division in the NFC East, so silver linings.

Miami is one of the best stories in the NFL right now, hands down. If you’re not a Dolphins fan and can name 10 players on their roster not named Tua Tagovailoa without Googling, I’ll give you a prize.

Seriously though, it’s a testament for how well Brian Flores has brought this team together. He took the sorriest roster in the NFL, added a rookie quarterback, and now has a chance to win the AFC East for the first time in 12 years. Sure, the Bills are still the class of the division right now, but the Dolphins really aren’t far behind.

Of course, it helps when Tagovailoa is playing like a five year veteran from the jump. Watch this team if they manage to put together a receiving corps for him, because the Dolphins could be a on the verge of a serious run in 2021, provided they don’t make the playoffs this year.

I didn’t want to leave out Arizona in discussing the NFC West this week. This is one of those cases that not only has ramifications for the NFL this season, but beyond. Kliff Kingsbury wasn’t supposed to be able to make his offense work in the NFL, and a lot of people thought this would be a Chip Kelly situation, where he wowed for a season then came back to earth.

However, Kyler Murray is the perfect quarterback for what the Cardinals want to do. Other teams can’t stop them, and stealing DeAndre Hopkins from the Texans was precisely the move this team needed to get over the hump. Now Arizona is leading the NFC West, they’re in excellent shape to make the playoffs this season, and even if they falter, the building blocks are there to make this team a perennial contender.