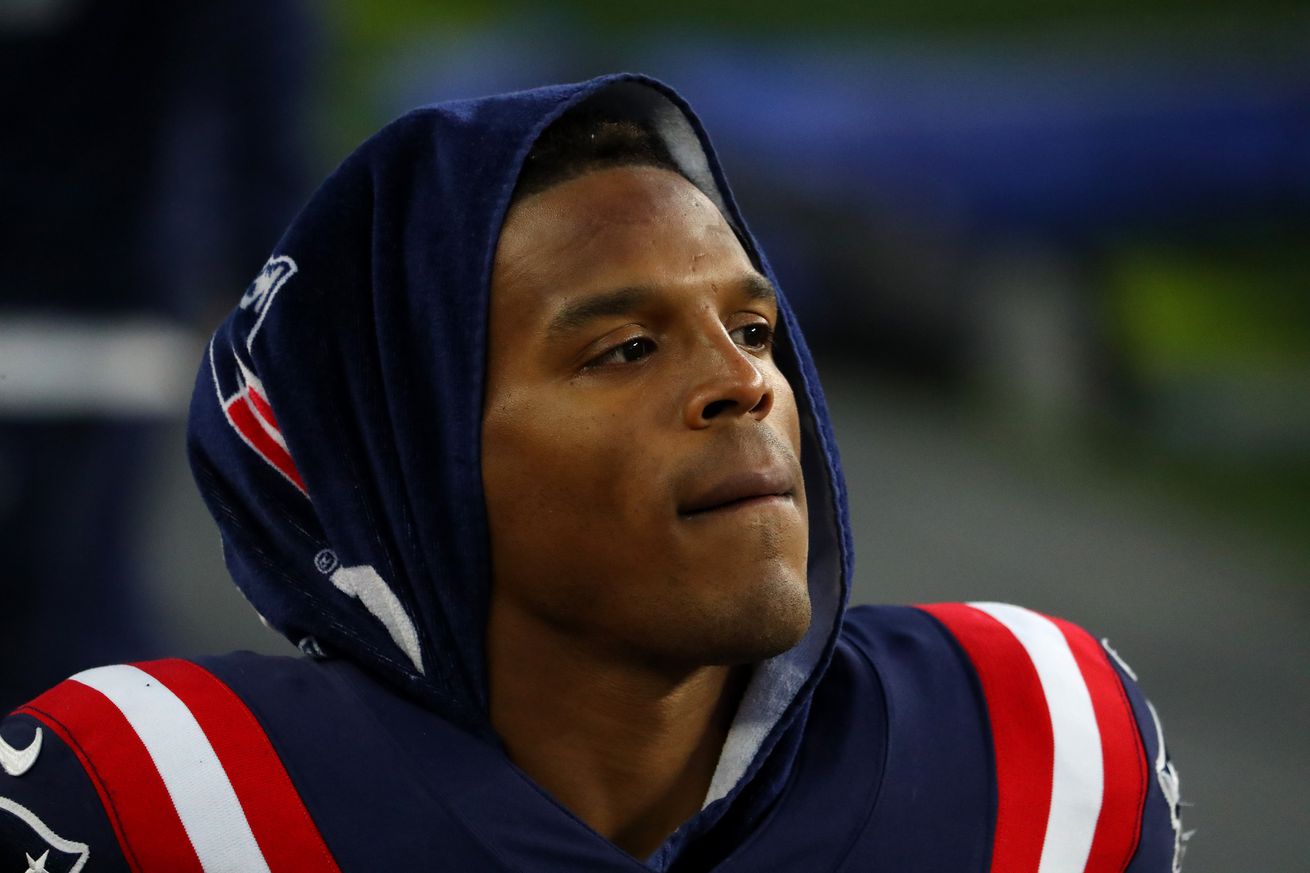 Cam Newton’s decline is such a damn shame.

Cam Newton was awful on Sunday. There’s no other way to put it. The Patriots’ quarterback was rightfully benched after a three interception meltdown that put New England in a hole so deep it was impossible to dig out of.

It wasn’t so much that losing to the 49ers was a disappointment. Before the season this probably would have been the expected outcome, but now the Niners are a shadow of themselves thanks to the injury bug, and honestly, the Patriots were playing pretty well until a couple of weeks ago.

Newton is the deciding factor in the Patriots’ downtick, and it’s a friggin’ shame. Not so much that a quarterback regressed, that happens all the time — but in how drastically Newton fell off a cliff following his Covid-19 diagnosis. Not that it’s an excuse for his performance, but rather an observation.

Dude looks like he got hit by the aliens from Space Jam. It’s borderline tragic.

Before falling ill Newton passed for 238 yards per game, posting a passer rating of 89.72 — respectable for a player still learning an offense. Since returning he’s thrown for just 127.5 per game, a rating of 43.23. More importantly five interceptions with no touchdowns. Newton has become the single biggest reason the Patriots are struggling, and after getting benched for Jarrett Stidham it’s unclear whether he’ll start again this season, or perhaps ever in the NFL again — and that’s a damn shame.

One of the league’s best redemption stories has turned sour. Maybe that’s a direct result of Covid, maybe not — but either way players don’t simply disappear this quickly without a contributing factor, and in this case there’s a chance we have one. There’s less zip on Newton’s passes now, he doesn’t have the same step when he runs, it’s all a mess, and if this is truly the end of Newton’s era as a starting quarterbacks in the NFL he will remain one of the league’s most lingering questions. If he had the weapons he needed and didn’t get injured did we miss out on seeing one of the most transcendent quarterbacks to play the game?

Until Sunday it felt like the Browns were winning in spite of Baker Mayfield, not because of him. That changed on Sunday when he threw for five touchdowns and utterly took over the game when Cleveland faced Cincinnati.

Normally this would be a case where we just gave Mayfield his props and move on, but honestly we need to give credit to Joe Burrow here too. Even in a loss, Burrow finished with 406 yards passing and three touchdowns. In doing so he’s now on pace for 4,624 passing yards — which wouldn’t just be better than Carson Palmer’s first full season as a starter, but any season of Palmer’s entire career. This is a very big deal, Burrow is for real, and while the Bengals are still a really bad football team, we’re going to be talking about Burrow for a long time.

Not to gush too much about the losing quarterback in this situation, let’s go back to the Browns — who are now legitimately one of the best teams in the AFC. This is so wild, 2020 is no nuts, and there’s something poetically beautiful about a maddening year like 2020 be topped off by the Browns dominating.

I love it so much.

As much as I love the Browns being good, I love this almost more. So let’s break this down: Gase reluctantly turns over the play calling duties for the worst team in the NFL, and immediately the Jets put on their best game of the season, losing by eight points to the Bills.

That’s so beautiful I want to make it into a shirt.

Like, I suspected Gase was the worst coach in the NFL before this moment, but man … this really seals it. This is the equivalent of challenging your 12-year-old cousin to a game of one-on-one, knowing you’re going to beat him, then getting 360 windmill dunked on.

Gase is way past the point of being a hilarious, creepy-faced meme. He’s so very. very bad. Literally everyone is proving they could be better than he is. I truly don’t know why the Jets are deciding to continue this facade, other than it’s hilarious. Hilarity is important, especially in 2020 when we’re so lacking it. So I guess I’ll allow this.

Let’s move any jabs at Cam Newton to the side. Matt Rhule and the Panthers are killing it, and are quietly the biggest success story in the NFL nobody is talking about. It’s not like Carolina are having any wild success, but they really shouldn’t be gelling this quickly into the first year of a rookie head coach who overhauled literally everything about the team in the offseason.

On Sunday the Panthers pushed the Saints to their limits, losing by just three points. For the second time in two weeks his team has pushed a good team (Arizona last week) to the limit, with a hugely flawed roster. If you told anyone before this season that Carolina would lost by three to New Orleans, without having Christian McCaffery they’d think you were losing it.

Basically everything Rhule touched in the offseason turned to gold. Teddy Bridgewater looks every part of the quarterback the Panthers hoped they’d get from his performance in New Orleans in 2019, and he’d doing it without a reliable tight end or any real safety valve. On the other side of the ball guys like Brian Burns are becoming fearsome in Phil Snow’s defense, and while everything might not be coming together yet, wait a couple of years. Rhule is proving his system works in the NFL.

There’s nothing left to say. I’m sorry Atlanta fans, but this is all hilarious.

I’ll take one on the chin. I thought Brady was washed at the start of this season, but dude has hit his stride and he’s killing it. Of course, it helps when you have more weapons than James Bond, but nonetheless any rust the Bucs were working out is now off. The NFC South looks prime for this team’s taking again, and any schadenfreude over a “super team” winning the league has now worn off.

It might not resonate out of the gate, but nobody is hotter than the Buccaneers right now, and the more this team works together the more dangerous they get. Lord only knows what happens if Brady can learn to use Mike Evans and then Antonio Brown can contribute anything meaningful this season.

The Chargers struck gold late in the first round with this one. If Tua Tagovailoa pans out then we really could be seeing another 2004 from a quarterback standpoint. Herbert was seen as the unprepared, lacking quarterback with plenty of risk. Now he’s had enough starts to show he can really do this in the league.

On Sunday Herbert posted his second straight start with a QB rating over 110.0, which is ludicrous. He has a high completion percentage, he’s cooking defenses, he’s playing far beyond what anyone expected and this really could be the start of something big in Los Angeles.

It’s early, sure, but if you’re a Chargers fan you’re over the moon right now. Even if the team isn’t winning.

Congratulations to my friend, Justin. He won his fantasy game this week because Todd Gurley didn’t stop at the 1-yard line and cost the Falcons the win. That touchdown gave him the points he needed to get over the top. Also, still, lol Falcons.