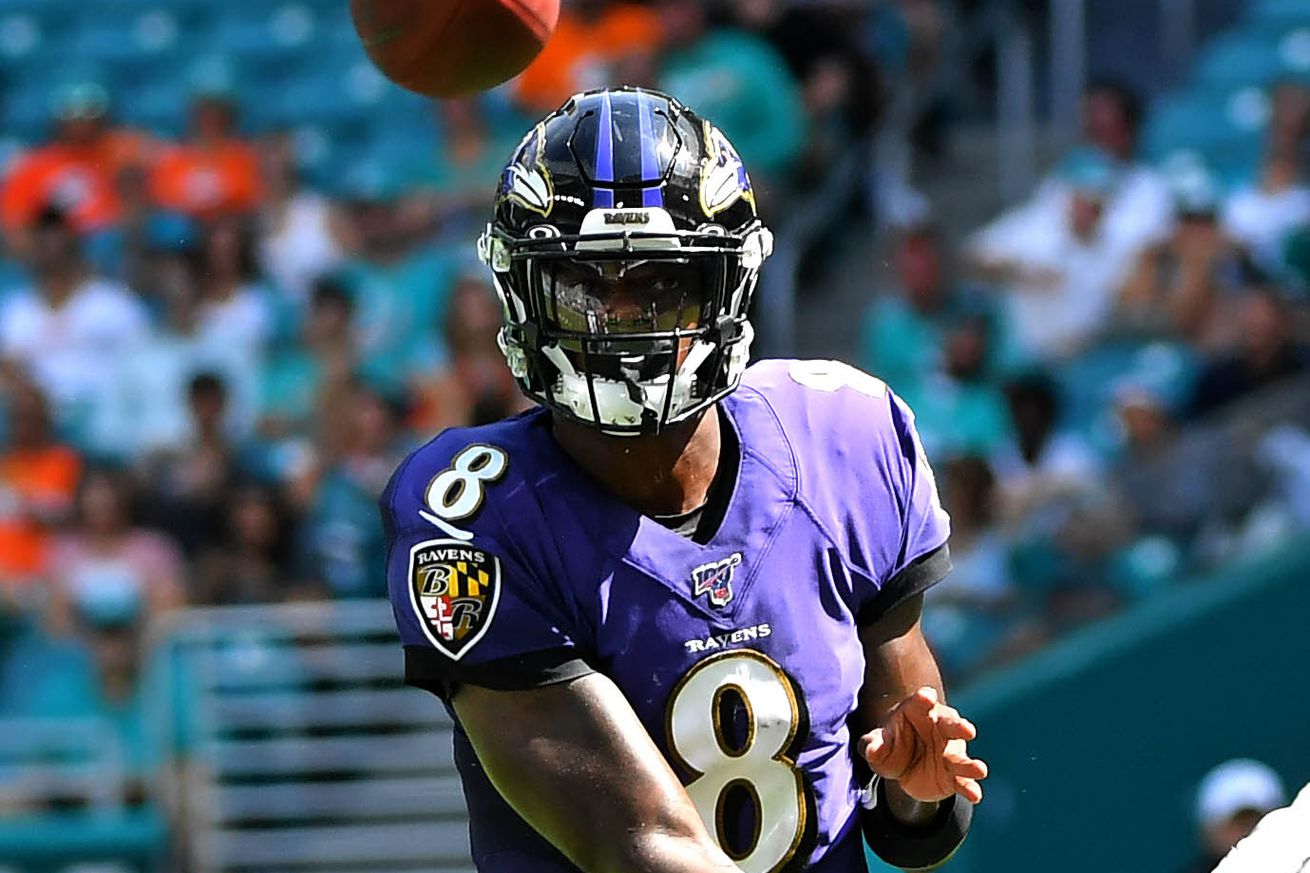 Oh, hell yes. This is exactly what the NFL needed.

In just his eighth career start, Baltimore Ravens quarterback Lamar Jackson had a performance for the ages. Jackson completed 17 of his 20 pass attempts for 324 yards and five touchdowns in a 59-10 win to start the 2019 season.

Yes, the Ravens were playing the Miami Dolphins, who clearly have their eyes set on the 2020 and 2021 season, but that fact doesn’t take away from the fact that Jackson quite literally had one of the best performances we’ve ever seen in the NFL. If you use the adjusted yards per attempt metric — which converts touchdowns and interceptions into yards — only three quarterbacks have matched the efficiency Jackson showed in the season opener.

Being on par, at least for a game, with three titans of the sport? Not bad!

Jackson never got the credit he deserved last year, despite navigating the Ravens to the playoffs as a 21-year-old rookie quarterback. In the first game of 2019, the Ravens were seemingly trying to break a narrative that Jackson can’t throw the ball and goodness, did they prove the doubters wrong. Jackson threw just six touchdowns during the regular season and had FIVE on Sunday. After averaging 17 rushing attempts per game in his seven starts last season, he ran the ball just three times for 6 yards.

When you dig into the numbers of Jackson’s evisceration of the Dolphins, it really shows just how dominant Jackson was.

For example, Jackson finished the game with 30.9 Estimated Points Added (EPA) on his dropbacks, according to Ben Baldwin of The Athletic. If you divide that 30.9 by his 24 dropbacks, Jackson averaged roughly 1.29 EPA per dropback. Drew Brees’ .39 EPA per dropback led the league in 2018!

Of course, Brees’ comes with a significantly higher sample size of dropbacks than Jackson’s one game, but the numbers are impressive, especially how they materialized on the field.

Here are six plays by Lamar Jackson that put those numbers into proper context. For individual plays, we’ll use Pro Football Reference’s before and after numbers to see just how valuable Jackson’s play was on Sunday.

Note: All touchdowns have an expected value of seven. The touchdown is worth six points and teams are expected to make the extra point attempt.

There’s been a lot of talk of the Ravens embracing a more spread-out offensive attack than the one they employed last year when Jackson was a part-time starting quarterback. On Sunday against the Dolphins, that was in full display.

Jackson’s first touchdown Sunday was on a run-pass option (RPO) that left Marquise Brown in one-on-one coverage on a slant route. Jackson was reading the defender who was sitting in the middle of the field before the snap. Since that defender crashed down and played the run, there was a wide open space for Brown to run into and catch the ball.

The free safety playing over top also came screaming down toward the line of scrimmage, leaving exactly no one to stop the Ravens’ speedy rookie wide receiver.

To make things sweeter, this was the first reception of Brown’s career. His second career catch was even better.

The Dolphins’ coverage on the day was less than ideal, but it was still up for Jackson and company to take advantage of Miami’s mistakes.

On a third down with three yards to go, Jackson found Brown for an 83-yard touchdown that put the Ravens up 21-0 in the first quarter. Even though the Dolphins were rushing three, Brown was able to get behind the entire defense and Jackson rewarded him with a perfect pass.

Just a flick of the wrist.

The Ravens had no problem letting their second-year quarterback fling it deep.

His third touchdown of the day was another deep pass, this time to wide receiver Willie Snead. The Dolphins rushed five defenders and left their safety (perhaps mistakenly?) in the middle of the field.

All Snead had to do was put a move on the cornerback covering him and wait for Jackson to drop a dime right into his hands.

The Dolphins’ defensive gameplan was a bit perplexing, but Jackson was on point with all his throws throughout the game.

Jackson played well when things got muddy in the pocket. On his fourth touchdown, the Dolphins sent seven defenders while the Ravens only had six blockers.

Jackson probably shouldn’t have backpedaled almost 20 yards away from the line of scrimmage, but he made up for it by leading rookie receiver Miles Boykin away from his defender with a phenomenal throw.

The Dolphins thought they could force Jackson into a mistake by sending pressure — and they almost did — but there was no stopping the former Heisman winner.

The Ravens ran a five-verts play to near perfection

Jackson almost had another long completion go for a touchdown.

Baltimore brought out a five-verts play, which has five vertical routes running deep. Even though the Ravens were up 42-10 halfway through the third quarter, they kept their foot on the gas.

Miami got a little bit too cute with its coverage look. The Dolphins dropped two defensive linemen into coverage and didn’t have anyone playing over the top to defend the deep routes, leaving tight end Mark Andrews in one-on-one coverage about 35 yards down the field.

Andrews dusted the man covering him, made the catch, and would’ve scored a touchdown if he didn’t have to dodge a falling defender in front of him.

Notice that the EPA after this play is 6.97. The Ravens were set up with a first-and-goal at the 1-yard line — a situation where teams are expected to score a touchdown.

That’s exactly what the Ravens did two plays later.

A touchdown to the fullback to finish the day

Jackson’s fifth and final touchdown was an easy dumpoff to fullback/defensive tackle Patrick Ricard. Ricard just slipped into the flat for the score that put them up by 39 points.

Jackson stayed in one more drive and got the Ravens got a field goal to put them up 52-10. After that, he got to watch Robert Griffin III come in and close out the game.

These were six of Jackson’s 20 throws on the day and all of them provided exceptional value as the Ravens throttled the Dolphins to open their season. At 22 years old, Jackson became the youngest player ever to post a perfect passer rating in a game.

Jackson smashed expectations to start the season. This performance doesn’t need an asterisk just because they were playing the Dolphins, either. Jackson looked like the first-round quarterback the Ravens drafted him to be. He was decisive, efficient, and most importantly he was deadly accurate with the ball.

Not a bad day at the office for a former wide receiver/running back/return prospect.