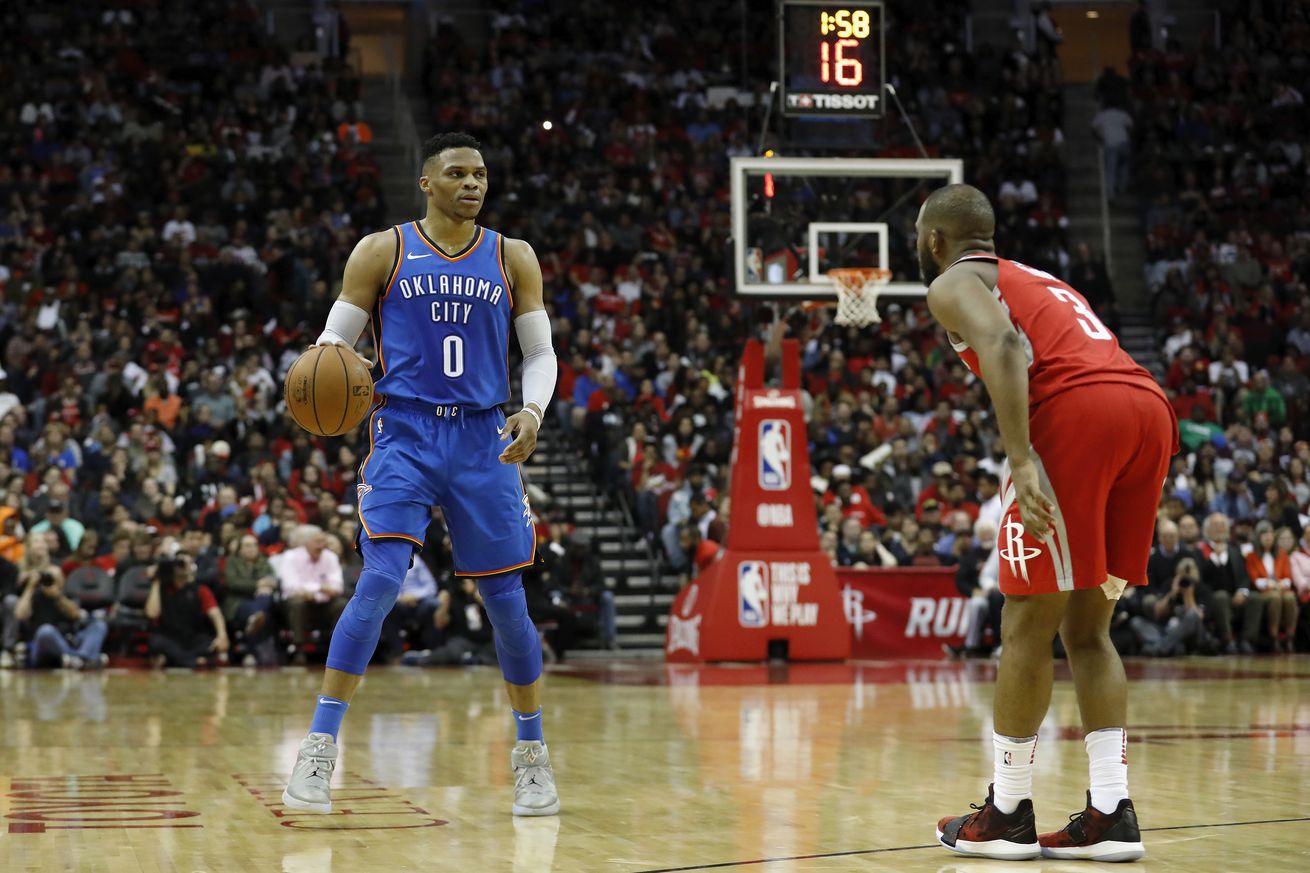 Russell Westbrook and Chris Paul have been traded for each other. Westbrook is headed to the Houston Rockets and Paul is going to the Oklahoma City Thunder in the latest monster trade to rock the NBA this summer. The Thunder are also receiving the Rockets’ first round draft pick in 2024 (1-4 protected) and 2026 and a pick swap in 2021 and 2025, per ESPN’s Adrian Wojnarowski.

The Thunder have been in rebuild mode since getting blindsided by Paul George’s trade request to the Clippers to team up with Kawhi Leonard. That deal brought Oklahoma City a wealth of future draft picks and signaled the end of the Westbrook era. It only took GM Sam Presti six days to find a package for the former MVP.

There have been rumors all summer of a rift between Paul and Rockets star James Harden. Now Harden and Westbrook — former teammates for three years in Oklahoma City — are set to share the court again.

This already may have been the wildest NBA summer ever even before this trade went down. Here are six different ways this trade is breaking our brains.

James Harden and Russell Westbrook will be a fascinating pairing

So much has changed since Westbrook and Harden last shared the court together in Oklahoma City. Harden blew up in to a superstar upon being traded to Houston, winning MVP in 2018 and finishing as runner-up for the award three other times. Westbrook won his own MVP by edging Harden in 2017, when he became the first player since Oscar Robertson to average a triple-double for the season. Westbrook has now averaged a triple-double for three seasons in a row.

Can these two stars co-exist again? Both are ball dominant lead guards who are used to being in charge. Westbrook is a shaky shooter who won’t space the floor around Harden’s drives to the basket the way Paul did. Harden may also have to adjust his typical diet of isolations and pick-and-rolls with a teammate as assertive as Westbrook around.

The Rockets paid a hefty price for Westbrook, but this pairing is far from a perfect fit. Can Westbrook and Harden thrive together again or will this be a disaster? Houston is going all-in to win a championship this season with the move.

The Thunder now have a war chest of draft picks now

Oklahoma City is fully committed to rebuilding for the future. Just look at all these picks the Thunder own:

In dealing Westbrook, George, and Jerami Grant, the Thunder have torn down their roster for future assets. They might not be done yet.

What happens with Chris Paul?

It would appear the Thunder have no reason to keep Paul. The roster is almost completely devoid of veteran talent right now, save for long-time center Steven Adams. Oklahoma City will likely try to move both players.

Paul is still owed $124 million for the next three seasons. He is still a quality player at 34 years old, but teams likely won’t be lining up to take him with that contract. Dealing Paul is next on Presti’s agenda. He can still help a veteran team win in the right situation.

The Thunder looked so promising just one year ago

When Paul George decided to re-up with the Thunder last summer, it looked like Oklahoma City would be a contender for the immediate future. Westbrook again averaged a triple-double and George had a brilliant season that put him in the MVP conversation, but the Thunder still felt like they underachieved with 49 wins and the No. 6 seed in the West playoffs.

George’s late season shoulder injury meant the Thunder never got the chance to be the best version of themselves in the postseason. The Blazers beat OKC in five games, with Damian Lillard’s epic buzzer-beater ending the series.

Little did anyone know at the time that Oklahoma City would blow it up like this.

Oklahoma City had Kevin Durant, Russell Westbrook, and James Harden. Now they have none of them.

The Thunder might have had the most successful run in the history of the NBA draft at the end of the last decade. Oklahoma City took Kevin Durant at No. 2 overall in 2007, picked Westbrook at No. 4 in 2008, and selected Harden at No. 3 in 2009.

It seems like only yesterday that the Thunder took Game 1 of the 2012 NBA Finals away from LeBron James and the Miami Heat. At the time, it seemed like OKC was poised to become the league’s next great dynasty.

Thunder fans will have to live with their memories for the next few seasons. It’s going to be a long road back to contention.

Leonard and George to the Clippers. Anthony Davis to the Lakers. Durant and Kyrie Irving to the Nets. Jimmy Butler to the Heat, Kemba Walker to the Celtics, Al Horford to the 76ers, and D’Angelo Russell to the Warriors.

Now we have a CP3 for James Harden trade.

It feels like a new league. We can’t wait to see how it plays out.