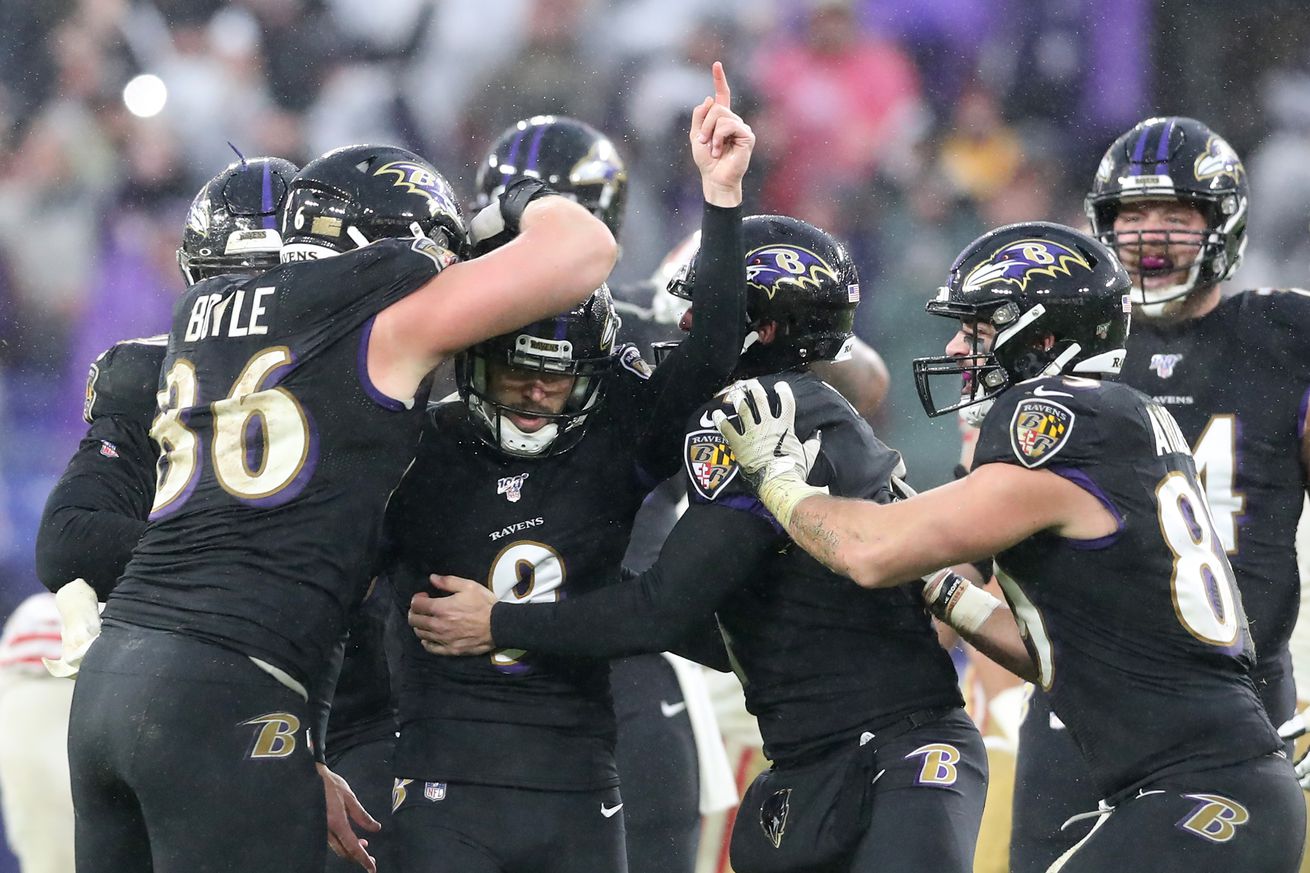 The Ravens took over the top spot in the AFC, while the NFC East is at dumpster fire levels. Geoff Schwartz examines the latest playoff standings.

Well, it’s time to get back to it after an excellent weekend of football. I hope you all enjoyed your time with family and friends over the holiday. As usual, I’m going to recap the playoff contenders from the past few days with a look ahead to next week.

And it was another wild weekend in the NFL, especially in the AFC. Because we know the teams that will most likely make the playoffs in the NFC, it’s a little more boring — outside of the NFC East, which is a dumpster fire right now.

Here’s a look at the biggest movers, up and down, in Week 13.

Moving up in the AFC

The Ravens have the look of a Super Bowl team. They played one of their worst games of the season against the 49ers and yet still won the game. On Sunday, the Niners had more yards per play, were better on third down, better at rushing, and Jimmy Garoppolo threw for more yards than Lamar Jackson. None of that mattered. The Ravens got the 20-17 win in the rain after a Justin Tucker field goal.

And for the Ravens, that is all they needed. They’ve now beaten the Patriots, 49ers, Seahawks, and Texans. They keep slaying the beast and when you watch them play, they have that mojo. They don’t make mistakes and things break their way. They make their own luck as well by being disciplined, not having mental errors, and not turning the ball over.

With the Patriots losing to the Texans Sunday night, Baltimore is now in the driver’s seat for the No. 1 seed.

Well, I didn’t see this coming at all. The red-hot Titans went to Indianapolis and won another game with Ryan Tannehill under center. Since they’ve made the switch to Tannehill from Marcus Mariota, this offense has been unstoppable. Here’s the difference with the two quarterbacks:

As the quarterback play has improved, so has the running game. In the last three weeks, Derrick Henry has broken off for 188, 159, and 149 yards. The Titans’ offense is rolling. Their defense has just been OK this season, but they’ve dealt with injuries and have played teams that can score on offense. I trust their defense down the stretch and I think I need to trust this resurgent Ryan Tannehill.

The Titans are buying in and with their upcoming schedule — including two games against the Texans — they control their destiny for the AFC South.

They stay the course with a big win over the Patriots. Deshaun Watson was awesome as usual and like I stated above with the Titans, they control their own destiny with two games left against their division rival. Also, they get the No. 3 seed with the tiebreaker against the Chiefs. That puts the Texans into an easier wild card game.

In their last three games against the Raiders, the Chiefs have won by a combined score of 103-22. They own the Raiders and Derek Carr, and now likely own the division again for the fourth season in a row. They have a two-game lead in the standings, but in theory it’s a three-game lead as they hold the tiebreaker against the Raiders.

However, the Kansas City offense continues to be off this season. It was predictable that we’d see some regression, but Patrick Mahomes hasn’t looked all that comfortable this season in the pocket. Yes, he’s playing well, but not as well as we saw last year. He’s still drifting out of the pocket too often and missing on throws he’s made in the past.

Nonetheless, the Chiefs are going to win the division and either get the third or fourth seed. A first-round bye isn’t going to happen.

I hope Mike Tomlin gets some love for NFL Coach of the Year. The Steelers beat a Browns team that was almost at full strength and playing well. Meanwhile, the Steelers were a mash unit:

No JuJu, no Conner, no Pouncey or Tuitt.

Pretty incredible resolve from the Steelers.

It didn’t matter. The Steelers won another game and are still in the wild card hunt. Right now, they are sitting in the No. 6 seed with games left against the Cardinals and Jets. If they win both, that gives them nine wins, which should be enough to make the playoffs. If they steal one against the Ravens or Bills, watch out.

Moving down in the AFC

Been saying this for weeks now for @Patriots offense. Outside of the physical-12 has trust in 1 guy. Edelman. That’s it…and it’s warranted. Watch below. @MikeGiardi @patspulpit #SNFonNBC #Patriots @RochieWBZ @BenVolin pic.twitter.com/Vf8mbaUqXg

That is where the Patriots are now on offense. Defensively, they are fine. But they are probably not getting homefield advantage because the Ravens don’t seem poised to lose in the last four weeks.

Still, while everyone will freak out about the Patriots losing this game, I’m not. I just can’t. How many times have they proven these games don’t matter in the playoffs?

Yikes. The head coach is wearing “Pittsburgh Started It” t-shirts like a petty teenager. Coaches are getting quoted before the game about taking back the North. Sheldon Richardson puffed up his chest earlier this week … and they lost.

I can’t state this enough: Freddie Kitchens is holding this team back. When a head coach is out wearing stupid shirts that undermine his message (or maybe it doesn’t and that of course is the issue), it shows a lack of maturity that rubs off on the team. His team is undisciplined and underachieving. And he just doesn’t get it, as his postgame comments about the shirt show.

Two weeks ago, the Raiders were the up-and-coming team that everyone needed to watch out for. The Raiders’ rookie class was crushing it, and the media was praising the organization. Even I said some nice things about them. However, that’s all come crashing down after blowout losses to the Jets and Chiefs.

The Raiders have improved this season but they aren’t good enough to contend for the playoffs yet.

Moving up in the NFC

The Saints are the only team that has clinched a playoff spot so far. They have locked down the NFC South and will likely end up with the No. 1 or No. 2 spot in the NFC standings.

The Packers took care of business in a snowy contest against the Giants. There’s not much else to report on them. They’ve kept pace and depending on the result of the Seahawks-Vikings Monday night matchup, the Packers could have a game lead on the Vikings.

The NFC North winner and runner-up with probably get the No. 3 seed and the No. 6 spot. That battle is down to the Packers and Vikings. It could be determined when they meet in a few weeks.

Moving down in the NFC

The 49ers lost to the Ravens in a game they should have won. They played better but didn’t win. That’s the NFL. I have a hard time putting them in this section because they proved they are still an elite team. However, with a trip to the Superdome to face the Saints coming off 10 days of rest, this loss in Baltimore could cost them a chance at the No. 1 or 2 seed.

In fact, it could cost them the NFC West. In that case, they’d end up the fifth seed and would play on the road against an NFC East opponent in the playoffs.

2 and 3. Dallas Cowboys and Philadelphia Eagles (but really, the entire NFC East)

The NFC East is a complete wreck. The Cowboys lost to the Bills on Thanksgiving. It was ugly. And then it got worse. The Eagles have the easiest schedule down the stretch. So what did the Eagles do Sunday? They lost to the Dolphins in Miami.

The NFC East might have a seven- or eight-win team hosting a home game against a 12-win team. Just wild.

As a refresher, here’s what the playoff standings look like before Monday Night Football in Week 13: