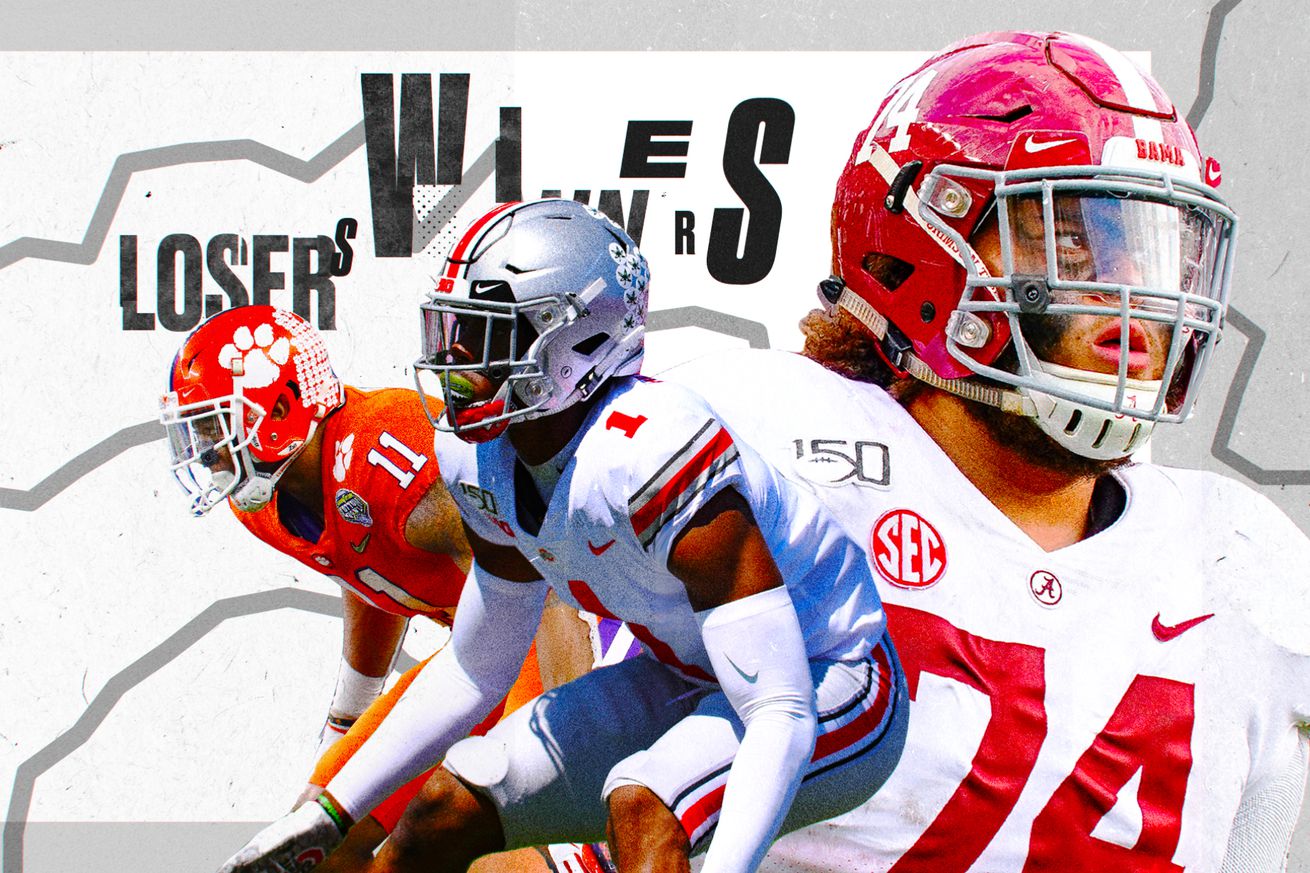 Isaiah Simmons, Jeff Okudah, and Jedrick Wills Jr. heard their names during Round 1 of the 2020 NFL Draft.

Things went great for the Dolphins, Tom Brady, and Ohio State. Not everyone was so lucky, though

The first round of the first-ever teleconferenced NFL Draft is over. Tragically, it was short on unmuted phone lines, random dog interruptions, and pick-disrupting technical difficulties. In fact, it was pretty much just a normal draft, only without Roger Goodell getting pummeled by 300-pound defensive tackles and their excessive hugs.

While the true results of this year’s opening day at the draft won’t be understood for more than a decade, the first 32 picks were able to earn knee-jerk reactions. The Dolphins got to see their rebuild take root with a QB-OT combination that will hopefully carry them into the future. Across the division, Bill Belichick played his cards so close to his vest he opted out of Thursday entirely.

The Packers got a new quarterback to play behind one they still owe more than $120 million. The Jaguars killed the trade leverage of one of their few remaining stars. The city of Columbus, Ohio, got to see a whole bunch of former residents make the leap to football’s biggest stage.

Who were Thursday night’s biggest winners and losers? We’ve got a few ideas, some of which won’t be completely proven wrong over the next five years.

Tua Tagovailoa was the smart choice. Though it looked like the Dolphins may trade up for an offensive lineman or opt for Justin Herbert, those pre-draft rumors turned out to be a smokescreen. Miami has its franchise quarterback, and it’s the guy who lit up the SEC over three sometimes-healthy years.

The same guy who looks good in a suit, even in his family’s swank-ass living room:

The Dolphins were able to get their cornerstone tackle 13 picks later. Austin Jackson isn’t just a great pass blocker, he’s a tremendous human being who put off his dreams in order to save his sister’s life. He’s a raw talent, but he’s got the potential to be an All-Pro with the right development.

That wasn’t all! They turned the 26th pick — one acquired from the Texans in exchange for Laremy Tunsil and Kenny Stills — into the 30th pick and a fourth-rounder through a deal with the Packers. That pick turned out to be speedster corner Noah Igbinoghene, who will team up with Byron Jones and Xavien Howard in one of the NFL’s most terrifying secondaries.

The Dolphins needed A LOT of talent to speed up their turnaround. They got three possible future stars and the chance to add more all in the course of a few hours Thursday.

New England was set to make only its second draft pick inside the top 23 since 2012 after flopping out of the Wild Card Round of the playoffs. But instead of selecting a potential quarterback of the future, Bill Belichick decided to defer to Friday. He shipped the Patriots’ first-round pick to the Chargers for their 37th and 71st overall selections.

The move recharges the team’s Day 2 draft pool and gives the Patriots more low-cost ammunition to refill a roster that’s been picked apart in free agency. Per Adam Schefter, Belichick is confident the player he wanted at No. 23 will be available at No. 37, which would effectively give the club a free third-rounder.

That’s good! But if you’re a Pats fan who came into Thursday night waiting for some semblance of local sports news or a glimpse into the team’s future, well … at least you got to see Belichick’s wicker collection:

Joe Burrow. Chase Young. Jeff Okudah. What do the top three picks in this year’s draft have in common? They all, at one point, played for Ohio State.

Consider for a second the Buckeyes’ 2017 roster. It not only had Burrow, Young, and Okudah, but also another first-round pick in this class, Damon Arnette, and several first-round picks from other years, including Nick Bosa, Dwayne Haskins, Billy Price, and Denzel Ward. And probable future first-round picks like Shaun Wade and Wyatt Davis. And way more NFL players (Jerome Baker, Sam Hubbard, Terry McLaurin, etc) than that.

It’s no wonder OSU alums are already coming up with a new nickname for the program, when DBU no longer does it justice:

Nah we might as well just say NFL U ! I’m sayin that from now on Sunday Night Intros ! Lol https://t.co/fcqxFZM8OE

Round 1 ended up being a pretty good recruiting tool for Ohio State head coach Ryan Day:

If either one of my Kids decide to chose Football for their Career I’m definitely sending them to OHIO STATE!!!

Not that he needs much help these days.

The Jaguars pass rusher is very publicly angling to get out of Jacksonville. While he was given the franchise tag by the team back in March, Ngakoue has taken to Twitter to express his desire for a trade. He’s even got into public spats with Jaguars executive Tony Khan about it.

Just trade me . I don’t need the speech

However, the first round of the draft was nothing but bad news for Ngakoue. It showed there continues to be no worthwhile trade market for his services — something Jaguars GM Dave Caldwell confirmed later in the night — and the team added another pass rusher to the mix by picking K’Lavon Chaisson.

Ngakoue is backed into a corner now. He can follow the Le’Veon Bell path and sit out the entire 2020 season, but that’d cost him the $17.8 million he’d make from the franchise tag. The Jaguars could trade Ngakoue, but they certainly don’t have to either. With Chaisson and Josh Allen on the roster, Jacksonville can feel OK with whatever route it chooses.

Even though the Jaguars already had most of the leverage, picking Chaisson gave them just a little bit more. Ngakoue’s chances at getting out of Duval any time soon looker slimmer than ever.

The Arizona Cardinals needed a little bit of help all over their defense. So they got a player who can do a little bit of everything. Isaiah Simmons was projected to go as high as the No. 3 pick, but his brief slide down the draft board paired him up with an innovative head coach who’ll be receptive to his freewheeling, play-almost-anywhere skills.

And we do mean play almost anywhere:

Even better news for Kingsbury is that he can scheme up plays for Simmons, all from the comfort of his Parasite home:

what does Cardinals coach Kliff Kingsbury look like he does for a living pic.twitter.com/ODEl8ic3dX

Simmons, the Clemson linebacker/safety/corner/etc, was still on the board when the defense-needy Panthers made their selection at No. 7 overall. The fact they chose Auburn defensive tackle Derrick Brown over him wasn’t especially eye-opening on its own, considering what a talent Brown is.

Carolina’s reported reasoning behind the pick, however, was:

The Panthers liked Clemson LB Isaiah Simmons a lot at No. 7 and he was the best pure athlete on the board, but they felt he was a better fit for a veteran team because of his ability to play so many positions. So they went with Auburn DT Derrick Brown,… https://t.co/Wfu6yhMSgv

Ah. So Simmons was too athletic and versatile for the Panthers. Got it.

Brady’s week started with the addition of a recently un-retired Rob Gronkowski. Then the Buccaneers reiterated their commitment to keeping their new QB happy by trading up one spot to pick up a tackle who could be the best blocker to emerge from this year’s rookie crop.

Tampa Bay gave up a fourth-round pick to move from No. 14 to No. 13 and select Iowa hoss Tristan Wirfs, the reigning Big Ten Offensive Lineman of the Year. Wirfs was widely regarded as a top-10 pick this spring, but his slight fall made him too tempting for the Bucs to pass up. Now he’ll go from protecting Nate Stanley to keeping a six-time Super Bowl winner upright.

Coming into the 2020 draft, Rodgers was eager to point out how cool it would be for his Packers to add some receiving help in a draft loaded with wideout talent.

Aaron Rodgers on @PatMcAfeeShow: “We haven’t picked a skill player in the first round in 15 years, so that would be kind of cool.”

Rodgers says whoever the pick is, he’ll track down his phone number and welcome him to the team tonight — if the Packers don’t trade out.

It looked like Green Bay was going to fulfill those expectations when it traded up to No. 26. Then the franchise selected … Utah State quarterback Jordan Love. Instead of getting a first-round wide receiver or tight end to lighten Davante Adams’ load, Rodgers got the player who the Packers will groom to be his successor.

We’re sure he’s fine with that.

Kinlaw has big shoes to fill. His landing spot at No. 14 was made possible by the Niners’ willingness to ship DeForest Buckner — another first-round pass-rushing interior lineman, who has 19.5 sacks in just the past two years — to the Colts.

But Kinlaw is also capable of becoming an All-Pro for the 49ers. He was a wrecking ball in the middle of the field for South Carolina and should start immediately in the NFL. The presence of pass rushers like Nick Bosa, Arik Armstead, and Dee Ford should limit the number of double teams he sees as a rookie.

On that note, here’s Kinlaw’s dad impersonating every QB who has to face the 49ers’ defensive line this coming season:

Javon Kinlaw’s dad’s reaction to his son getting drafted pic.twitter.com/f6amsidFbj

There was a lot of handwringing about the effect a fully virtual NFL Draft could have on teams’ ability to trade. The league even considered adding an extra time option if GMs were working on finalizing a trade. Maybe that’s why John Lynch of the 49ers had three phones at his draft day set up.

Teams worked ahead of time to make sure that they could get trades done.

More than ever, teams will try to work out trades before the NFL Draft begins just in case. To that point: The #Lions have been engaged with multiple teams on potentially trading out of the No. 3 spot, sources say. Things have heated up over the last 24 hours.

So why was there just one trade in the first 20 picks and none in the top 10? There weren’t any technical difficulties that kept deals from happening. It seems like teams were content to patiently wait for the prospects they coveted to slide their way — which is fine, but kinda boring.

Well, it wasn’t the most wronger year after all. Despite warnings that mock drafters were way off this year, they weren’t at all. It was actually one of the most accurate first rounds for mocks in a while.

Five of the first six selections were the most popular choice in mock drafts. The only exception was the Giants taking Andrew Thomas instead of a different offensive tackle. While there were a few relative surprises — like cornerback Damon Arnette to the Raiders with the 19th pick and linebacker Jordyn Brooks sneaking into the first round to the Seahawks at 27th overall — no pick came completely out of left field.

Even those two picks by the Raiders and Seahawks addressed needs that were expected to be priorities. It’s time to give the draft prognosticators a round of applause for their 2020 performance.

There was little doubt the Browns would draft a tackle in the first round. It was just a matter of which one. Still, it was a little surprising they took Jedrick Wills, who’s only played right tackle, when they just signed Jack Conklin in free agency.

Wherever he lines up, though, Wills is ready to play right away, which is what Cleveland (and Baker Mayfield) needs most of all. And that has former Browns stalwart Joe Thomas pumped as hell:

That’s it, we’re ready to believe this is the Browns’ year.