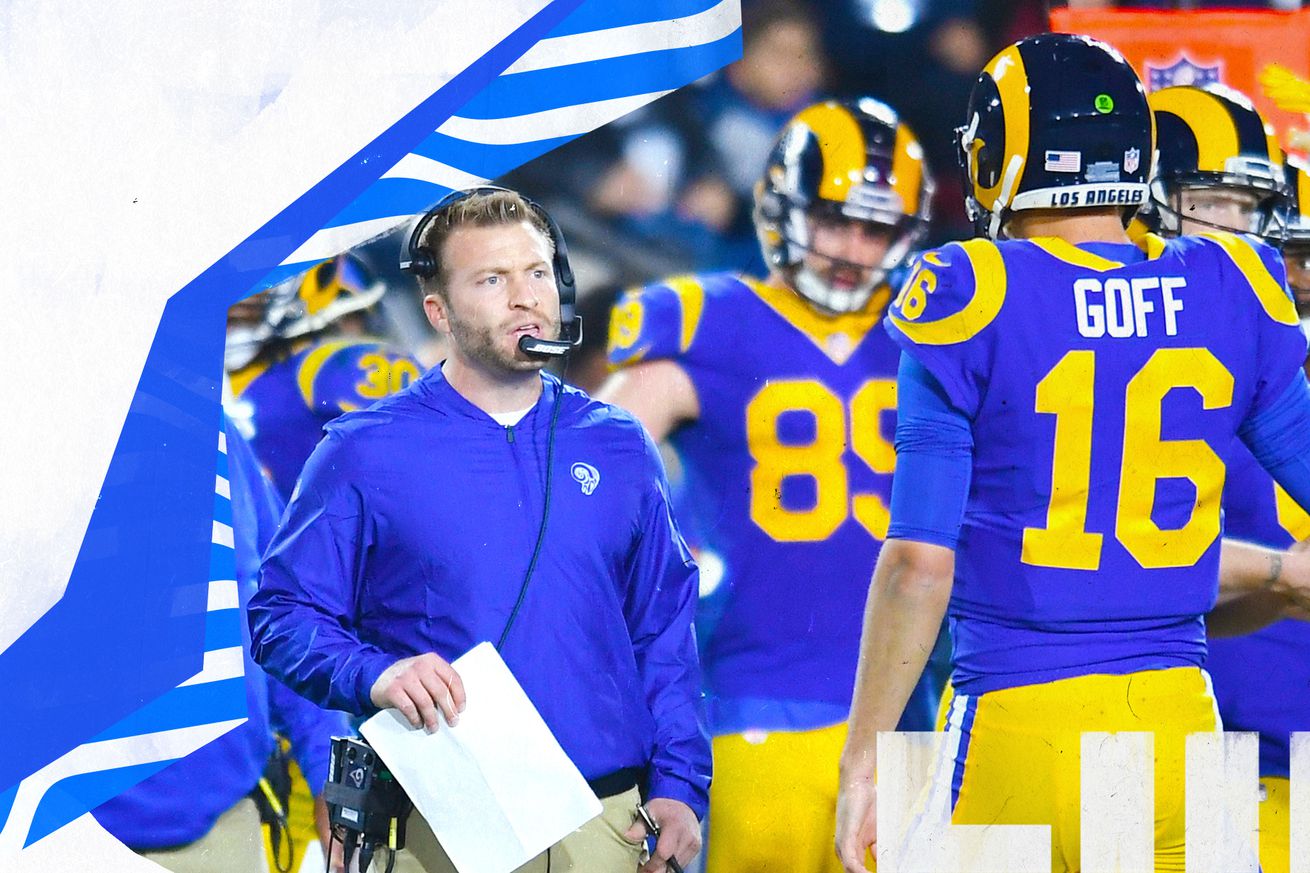 The Rams’ offense is centered around play-action and a strong ground game that work together almost flawlessly.

Sean McVay has been the hottest coach in the league since taking over a moribund Rams offense in 2017 and instantly turning them into one of the best offenses in the league.

The Rams’ offense is centered around play-action and a strong ground game that work together almost flawlessly. Here’s a quick overview on how their passing game is built through the run game.

The ground game is the basis

While teams don’t need a great running game to effectively use play-action, the looks the Rams give in the run game does help set up their play-action game. The Rams’ run game primarily consists of inside zone and outside zone.

When the Rams have C.J. Anderson in the game, they like to run inside zone. They let their offensive linemen get double teams up the middle before scraping off to the linebackers, and then Anderson explodes through the second level for big chunks of yards.

The Rams tend to run more outside zone with Todd Gurley. Gurley is a more explosive runner than Anderson and outside zone plays tend to give running backs more space to run.

On this play, the Cowboys actually set the edge pretty well. There isn’t room for Gurley to bounce it outside or run the ball in between the left tackle and center, so Gurley takes the ball inside.

Los Angeles has a nasty split zone play in their repertoire too. The tight end blocks back across the formation and they added a jet-action fake with a bootleg to confuse the defenses either further. Here’s a great example from the Rams’ game against the Broncos this year.

Those two actions force the backside of the defense to hesitate before committing to the running back, creating a crease for the running back to exploit up the middle of the field.

What makes the Rams’ passing game so deadly is that their pass game, especially under center, looks exactly like their run game.

Watch how Rams play-action game looks exactly like their core run principles. Here’s a play action pass resembling their split zone package (without the receiver running across the formation).

A deep shot down the field off of an outside zone look.

And a play-action shot off of inside zone action with C.J. Anderson in the game.

The Rams even get creative with their personnel moving their receivers around the formations. In the NFC Championship Game against the Saints, the Rams had Brandin Cooks lined up as an H-Back and threw him the ball after faking split zone. That gave them a ballcarrier with a little more speed than a normal tight end.

The last big wrinkle the Rams have in their play-action-based passing game is the use of deep crossers. This is especially deadly against man coverage looks where they can get Brandin Cooks isolated on a cornerback and force him to keep up with Cooks while he’s running across the field — that’s easier said than done considering Cooks ran a 4.33 at the 2014 NFL Combine.

This what the Rams will be running when they take the field against the Patriots during Super Bowl 53. Zone running, play-action fakes, and deep shots down the field. This is their bread and butter on offense and they’ll need to do it well if they want to take home the team’s first Lombardi Trophy since 1999.