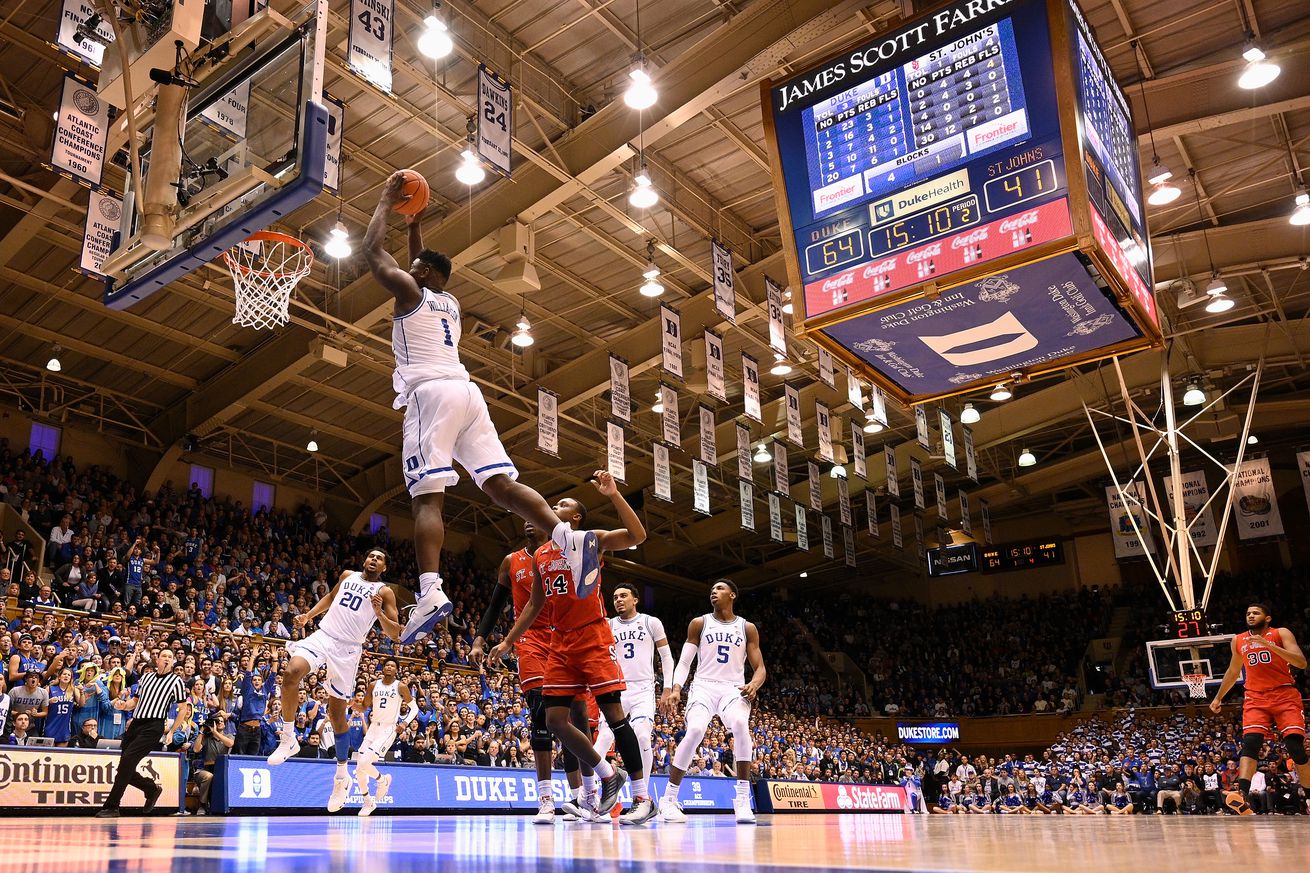 So you’ve been too distracted by football to pay attention to college basketball. That’s fine. There’s still time to catch up before March Madness arrives.

Have you been so engrossed in football for the last five months that you’re woefully behind on what’s been happening in the world of college basketball? Would you like to change that so you sound like you know what you’re talking about once March Madness rolls around?

Once again, we here at SB Nation college basketball have you, the diehard football fan who is finally ready to start paying attention to college hoops now that the Super Bowl is over, covered.

All right, no more football until next fall, but I’ve got a March Madness pool to win in a few weeks. Let’s dive into this.

Well it’s certainly been an exciting three months of college basketball so far. The season kicked off on Nov. 6, a few days earlier than in years past, and opening night was highlighted by a showc—

So tell me about this Zenon. How good is this guy really?

Zion. haha, yeah that’s right. Who’s Zenon? What was I thinking of?

The “girl from the 21st century” from those old Disney movies?

Yes! She was kinda cute.

So tell me about Zion.

Not only has Zion Williamson been the most talked about player in college basketball this season, he’s also been the best. The Duke freshman is the runaway favorite to win every national Player of the Year award.

Though coming out of high school he was labeled by some as “just a dunker” or “little more than a freak athlete,” Williamson has been a star across the board this season. He’s currently averaging 22.3 points, 9.0 rebounds, 2.0 blocks and 2.1 steals per game while shooting 68.7 percent from the field. His offensive rating of 132.2 on KenPom.com is more than five points better than any player Ken Pomeroy has tracked over the past 15 years.

Williamson will almost certainly be the No. 1 pick in this summer’s NBA Draft.

Does he still dunk though?

Oh, and they also aren’t No. 1. That distinction belongs to Tennessee, which has been No. 1 for the last three weeks.

Well why don’t their fans just say “to hell with football” and go all in on hoops? Seems like this is the clearer path to a national championship.

I can’t answer that, but I’m sure the hoop heads in Knoxville are thrilled with the way this season has gone so far.

So who’s the big “one-and-done” superstar for this Tennessee team?

There isn’t one. In fact, Tennessee doesn’t have a single top 100 recruit on its roster.

Junior forward Grant Williams is one of Williamson’s top challengers for national Player of the Year, but he’s far from a surefire lottery pick lock. The Volunteers are made up like an old school college hoops powerhouse; they had a surprising amount of success a season ago, returned just about everyone from that squad, and had multiple players make sizable leaps in production.

So I guess Tennessee’s taking advantage of Kentucky being so bad, right?

Kentucky’s actually not bad at all. They’re just a game behind Tennessee in the SEC standings and currently the No. 5 team in the AP top 25 poll.

But I caught a little bit of that Duke game when my buddy Ernie was handling the clicker, and they were getting their asses whipped by about 75 points! Was that a replay?

No, that was a Champions Classic game from the first night of the season. Duke throttled Kentucky, 118-84, but the Wildcats have progressed nicely since then. They’ve knocked off Kansas and North Carolina and Louisville, and they’ll get two shots at Tennessee before the end of the regular season.

Kansas is gonna win the Big 12 for like the 85th straight year, right?

Well, the Jayhawks have some issues.

They’ve been up and down since big man Udoka Azubuike was ruled done for the season in early January after an MRI revealed he had torn a ligament in his right hand. They were hoping to get another big man, sophomore Silvio De Sousa, eligible for the second half of the season, but the NCAA declared him ineligible for the rest of this season and all of next season because of issues that occurred during his recruitment.

So Kansas is gonna win the Big 12 for like the 85th straight year, right?

Ok, so who else is really good?

Well we talked about Gonzaga beating Duke. The Zags are currently 21-2 and ranked fourth in the country. They’re also finally healthy, as star forward Killian Tillie is back after missing the first half of the season because of an ankle injury. It wouldn’t be a shock at all if Mark Few got back to the Final Four for the second time in three years.

Also, Virginia has be—

Virginia has been fantastic once again this season. They currently sit at 20-1 with their only loss coming on the road against Duke by two points. Kyle Guy, Ty Jerome and De’Andre Hunter are all back from last year’s team that entered the NCAA tournament as the No. 1 overall seed, and all have been markedly better in 2018-19.

Yeah and how did that team last year exit the NCAA tournament?

That’s what I’m saying, man. Never pick Virginia to go to the Final Four. I should have your job.

Hey, show me some buzzer-beaters.

Indiana beat Butler at the buzzer with this three from freshman Rob Phinisee:

Campbell’s Chris Clemons is the leading scorer in the country at 29.2 ppg. Here he is beating Radford at the buzzer last weekend:

Villanova is good again. They started off a little slow after losing so many key pieces from last year’s national championship team, but they’ve hit their stride in recent weeks and are a perfect 9-0 in the Big East. They’ll get a significant challenge from Marquette, which is 8-1 in the league and currently No. 10 in the AP poll.

DePaul … kinda doesn’t suck. They’re still a longshot to make the NCAA tournament, but the Blue Demons have made significant strides this season. Right now they’re 12-9 overall and smack in the middle of a logjam of teams in the Big East standings.

You didn’t have to answer that so seriously.

So is one of the best players in the country an under-recruited, super athletic guard who plays for a Murray State team that is very exciting, but might not make the NCAA tournament because it plays in an Ohio Valley Conference that has a few other very talented mid-major squads?

That is an oddly specific question, but yes … to all of that.

Murray State’s Ja Morant leads the nation in assists (by a full 2.5 assists per game), is No. 8 in scoring (24.1 ppg), and is projected by just about every NBA mock draft on the internet to be a top five pick. An unheralded prospect coming out of Sumter, SC, Morant has burst onto the national scene as a sophomore thanks in large part to his next-level athleticism.

As much fun as it would be to see Morant play in the NCAA tournament before he takes his talents to the NBA, Murray State has a tough road to the Big Dance. The Racers are currently 8-2 and in a four-way tie atop the Ohio Valley Conference standings with Belmont, Jacksonville State and Austin Peay.

Keep an eye on that conference tournament, which will be going down March 6-9 in Evansville.

Any chance the Big Ten breaks that national championship drought?

Michigan, which lost in the national championship game both last season and in 2013, is very strong once again. John Beilein’s team won its first 17 games of the season but has since been beaten twice in conference play. Their biggest challengers in the league are Michigan State, which has been beaten four times but also just twice in the Big Ten. Both teams are currently ranked in the top 10 and have all the pieces necessary to play their way into early April.

What about West Coast teams? Any team out there that can break that drought?

If it happens this season, it’s unlikely to be a team from the West Coast’s signature conference. The Pac-12 has been abysmal in 2018-19, and is at risk of sending just one team to the NCAA tournament.

If a national champion does emerge from the left side of the country, it’s almost certain to be either Gonzaga or Nevada. The Wolf Pack are 21-1 at the moment, with their lone loss coming via a head-scratching 85-58 blowout defeat at the hands of a bad New Mexico team. Eric Musselman’s team is fully capable of making the Final Four, but playing in a Mountain West Conference that doesn’t appear to have another team that’s worthy of an at-large bid isn’t going to help their seeding come Selection Sunday.

So have you picked a Final Four?

It’s pointless to pick a Final Four when so much of who makes up the Final Four is based on tournament draw. I could wind up picking three teams that all end up in the same region on Selection Sunday.