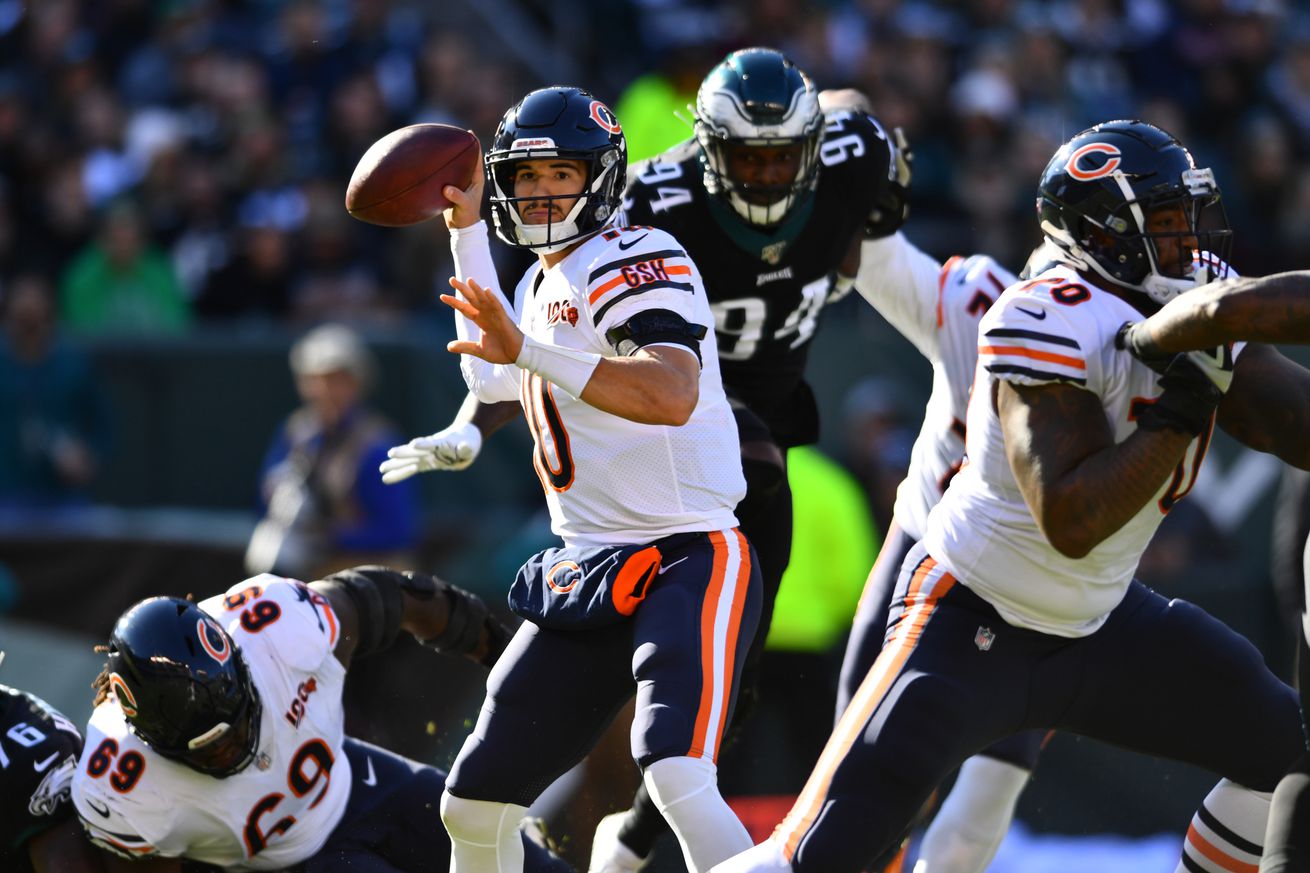 Retired NFL lineman Geoff Schwartz breaks down a myth about pass protection, and shows why Bears QB Mitchell Trubisky made a huge mistake on a sack play.

I was cut by the Lions at the end of August in 2016 and while I was looking for a job, I started writing for SB Nation. I thought coverage of offensive line play in traditional media and on social media was lacking, so I wanted to help educate the masses about play in the trenches. As I’ve expanded my role here, I get to write about everything, and it’s fabulous. But every now and then, I like to head back to my roots.

Offensive line play is complicated. I hate to say this because it sounds pretentious, but it’s true. Unless you’ve played or coached at a high level, there’s plenty you don’t know about the position. But that’s why I’m here.

This time, I’m going to use an example from the Chicago Bears to help explain a “myth” about offensive line play.

On this play against the Eagles, Bears quarterback Mitchell Trubisky was sacked. Here’s my explanation for why it doesn’t work:

So @MoveTheSticks shared this clip of a protection issue the Bears had on Sunday vs the Eagles. Naturally, this sparked my interest so I broke down the protection and how it could (should) have been better. The Bears had enough to block this blitz. Check it out. on pic.twitter.com/plkDngxfZJ

Bears coach Matt Nagy was asked about this exact play and he said, “That was unscouted. They have not shown that before and that was a good play by them. We had enough guys there. But that was something that’s an in-game adjustment that we need to make.”

Add this to the list of problems I see with Trubisky and why this season continues to be an indictment on him.

This pressure was easy to see. Look at the numbers. The Eagles have two defenders in a clear man coverage posture over the two Bears offensive players on the right. There’s not a single person for Bears center James Daniels to work to. With a young center and the Bears’ desire to double Eagles pass rusher Fletcher Cox, he wasn’t looking to adjust the protection. If he had looked left, he’d have noticed everyone over there, but the center also can’t look left as he’s got his head under his body getting ready for the snap.

It appears Trubisky doesn’t even look over his left to notice all the Eagles just standing there waiting to pressure, even through a double cadence. He appears to have no idea what’s happening on defense. The Eagles are bringing six and the Bears have six players blocking for the quarterback. It should have been an easy pickup.

I think this play, while just one example, shows that Trubisky is playing with blinders on the field. Being able to notice this pressure and change the assignment in the protection would have allowed him more time to convert this third down. Instead, it’s a sack and the drive is over.

Let me explain more about pass protection so you can better understand why this was such screwup by Trubisky.

Here’s what is really happening during pass protection

Pass protection isn’t just an offensive line job. It’s a job that requires understanding from the entire offensive unit. Yes, that includes the wide receivers in most cases. In the dropback pass game — when a quarterback takes the snap and does not fake a handoff or move out of the pocket right away — pass protection becomes more complicated, especially later in the down when the defense is on the move.

Pass protection begins with the play call. The protection is called, and the assignments are set. The offensive line has five defenders. There are the players on the line of scrimmage, most often four players, and then one defender off the ball. That player is designated by the protection. The two most common dropback protections have the linemen working to the Will linebacker on the weakside, or the middle linebacker in a “base” protection.

The linemen break the huddle, head to the line of scrimmage, and declare the linebacker they are assigned to. If the running back and tight ends are in the protection, their assignment is now set off where the linemen are working. Lastly, the quarterback acknowledges the declared linebacker, which is the most important part of this process.

The quarterback must acknowledge who the offensive line is working to because he needs to know his issues in the protection. If there are five blocking five, plus a running back, that’s six players to block six defenders:

If the defense brings a seventh defender, the QB needs to know where he’s going with the ball.

This is where the wide receivers are part of the protection. The quarterback will often point to defenders to let the WRs know that if these two guys come, the receivers need to run a hot/sight route. Now, this is what happens if everything works exactly as planned. Each and every protection is like this.

Here’s how and when protection should be changed

What happens if the picture isn’t clean? The line is supposed to slide right, but what if the linebacker isn’t in the spot where he’s supposed to be? What if there are many defenders on one side and the protection needs to be changed?

I think common wisdom is that the center, the commander of the line, makes the adjustment by himself. It’s not that simple.

As I stated, the pass protection unit doesn’t just include the offensive linemen. So if they make a change on their own, the quarterback doesn’t know where his issues are. The running back is now blocking the same defender as a lineman, and the wide receivers don’t know their jobs if too many defenders blitz. It’s a disaster and it should be avoided at all costs.

The proper way to change the protection starts from the quarterback. The quarterback takes a look at the shell of the defense, sees there’s an issue with the call protection, and changes the protection. He tells everyone in the pass protection unit what the changes are and they adjust accordingly. The QB then signals the new hot/sight defenders for the wide receivers and the ball is snapped.

Now, the job of noticing issues in pass protection isn’t only on the quarterback. The center, and often other linemen, can notice them too: when there’s no one in the area they are supposed to work to, or sometimes the safety location can give away pressure. A veteran center will suggest a change in the protection to the quarterback, who will often agree with the center and the change is made.

A center can only suggest a change and isn’t allowed to make wholesale changes. There are times where the QB does want to throw hot or he has another reason to ignore the line when it suggests a change is needed.

Being able to notice possible issues in the protection when scanning a defense takes film study and experience. You need to study the structure of the defense and notice tendencies. It can be as simple as counting. For example: There’s one wide receiver and there are two defenders over there. One doesn’t belong. And so on.

The process of studying all of these protection rules and adjustments happens throughout game week. Offensive linemen watch the film, have blitz pickup walkthroughs, practice, and meet separately with the quarterback to go over all of this. The more experience, the better you should be at this.