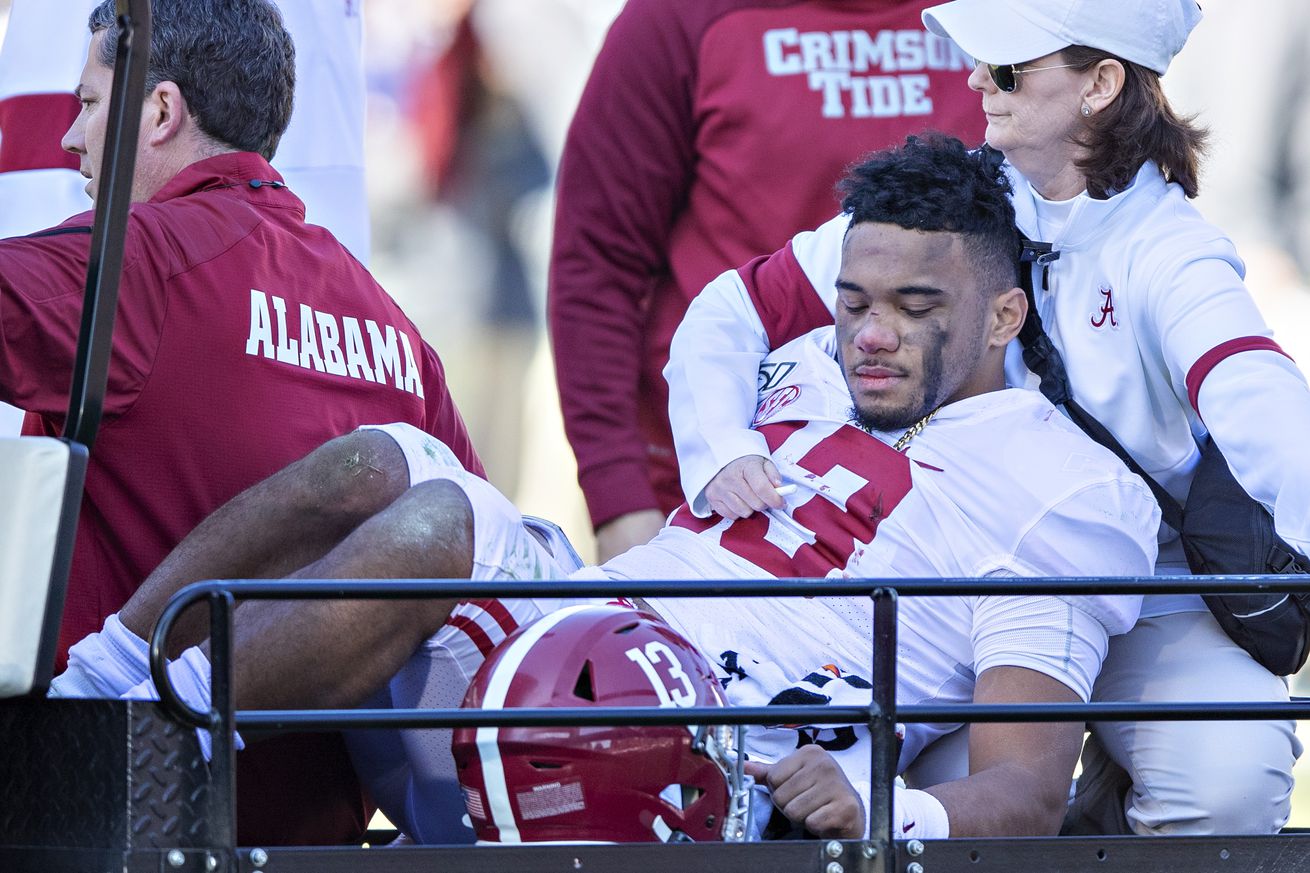 Before entering the NFL, Tua Tagovailoa was sidelined with various injuries at Alabama.

Tua Tagovailoa is expected to be a top-10 pick in the 2020 NFL Draft. The former Alabama quarterback had a historic run with the Tide. Over his three seasons, he set school records for career touchdown passes (87) and single-season passing yards (3,966). He also came off the bench to lead Alabama to a national championship as a freshman, followed by another title game appearance as a sophomore.

For most of his career, he was considered to be the top quarterback prospect whenever he decided to enter the NFL.

However, there have been concerns the QB’s health since he declared for the draft after his junior season. Most recently, and most importantly, Tagovailoa suffered a season-ending hip injury in 2019, but he’s been banged up quite a bit throughout his college career. Let’s run through a complete timeline of all his injury setbacks:

In Alabama’s first spring practice of 2018, Tagovailoa suffered an injury to his left throwing hand. According to AL.com, the injury occurred after he hit his hand on a lineman’s helmet. Tagovailoa’s father said it was a broken finger and his son underwent surgery.

He was able to return to practice a few days later, but was limited with what he could do.

.@AlabamaFTBL @Tuaamann_ back at #Bama practice two days after injuring thumb. Not much throwing but #Tua was back!@gohawaii @SECNetwork @SEC #RollTide pic.twitter.com/MVOVPDE3TV

In April, Alabama head coach Nick Saban said Tagovailoa had a “setback” with his injured hand. The quarterback missed the Tide’s spring game.

A few days after Alabama beat Arkansas, Saban told reporters Tagovailoa was dealing with a sprained knee. He sustained the injury in the 65-31 win and wore a knee brace at one point.

During the Missouri game on Oct. 13, the QB tweaked his knee after sliding on a play in the third quarter. Tagovailoa eventually came out of the tent, but with the game already decided, he did not play again.

A week later, Tagovailoa was slow to get up after throwing a touchdown in the third quarter against Tennessee:

The quarterback’s day was over at that point, though Saban said after Bama’s 58-21 win that Tagovailoa could have returned if necessary.

He came up limping after a play against LSU a couple weeks later, but didn’t miss any time from the knee injury in that game or the rest of the season.

In the third quarter against the Bulldogs, Tagovailoa left the game after taking a big hit that resulted in an injury to his left quad:

Tua limped off the field and into the injury tent after this hit. pic.twitter.com/KUEp5QUEdv

Bama rolled to a 24-0 victory, and Tagovailoa suited up in time the next week.

Early in the fourth quarter, one of Tagovailoa’s offensive linemen stepped on his right ankle as he was attempting to make a throw:

Tagovailoa exited the game and the next morning he underwent what’s called a “TightRope” surgery to repair his ankle, which typically has a two-week recovery time. The relatively new surgery serves as an “orthopedic zip tie” for the injured ankle. Here’s more from the Southern California Orthopedic Institute:

It can be used to repair a high ankle sprain, which damages the soft tissue structures between the tibia and fibula and causes these bones to separate. It can also be used to stabilize a fracture of the fibula. The TightRope system anchors the ends of the tibia and fibula together with a braided cord, rather than with a rigid surgical screw, to restore the original position of the bones and to allow for proper healing.

Twelve days after he underwent surgery, Tagovailoa was back practicing ahead of Bama’s College Football Playoff semifinal game against Oklahoma:

.@AlabamaFTBL first day of bowl practice and Tua Tagovailoa is running around. @Tuaamann has been telling us all along he’s taking advantage of every second possible to rehab from his ankle surgery- Video shot by CBS 42’s @RonGSports pic.twitter.com/O90kxnJwLH

Even though he told reporters his ankle was only about 85 percent, Tagovailoa went 24-of-27 passing for 318 yards and four touchdowns in Alabama’s win.

Less than a year later, Tagovailoa injured his other ankle when he took a sack against Tennessee just about midway through the second quarter.

He headed to the locker room and didn’t return to the game. The next day, he had a “TightRope” procedure to repair it — the same surgery he had the season prior. He missed Alabama’s game against Arkansas the next week. Since the Tide had a bye the week after that, Tagovailoa was back in time for Alabama’s Nov. 9 game against LSU.

Just a week after making his return against LSU, Tagovailoa’s season was cut short due to a gruesome hip injury he suffered after being dragged down by a pair of Bulldogs tacklers. Visibly emotional and upset, Tagovailoa was carted off the field:

Tagovailoa underwent surgery on his right hip on Nov. 18 and did not play for Alabama again.

The news wasn’t too much of a surprise, but he still had a year of eligibility left if he wanted to return.

The QB hadn’t been cleared for full drills just yet, but he still went through interviews and met with various teams.

“Mentally, it’s been a grind,” Tagovailoa said of his rehab process. “But it’s not something that’s new to me. I’ve dealt with my hand injury, my left ankle and my right ankle. I sort of know what to expect going through this process. But it’s definitely been a grind.”

Although he didn’t throw at the combine, he had plans to throw at Alabama’s pro day in March.

Bama’s pro day was initially supposed to take place on March 24, but it was cancelled weeks due to the Covid-19 virus. Tagovailoa was still able to show off what he could do, though:

This news meant Tagovailoa could start training with any team that selected him, without restrictions.

“I am extremely pleased,” Dr. Lyle Cain said via Yahoo Sports. “If you told me four, almost five, months ago now that he’d be where he is now, I think I would have been very happy. I think he’s done extremely well for where he started out.”

Tagovailoa sent video of his virtual pro day to teams, and he also explained on Instagram Live why teams shouldn’t worry about his durability.

“I’m not playing badminton. I’m not on the swim team,” Tagovailoa told Mike Locksley, his former offensive coordinator, as transcribed by ESPN. “[Football] is a physical sport. You’re gonna get hurt. That just comes with it. And it was just very unfortunate that I got hurt every season.

“It’s a part of the game. It’s a contact sport. I can only control what I can control. I can’t control that.”

We won’t know where Tagovailoa will land until Thursday night, but he is still projected to be the second or third quarterback off the board.