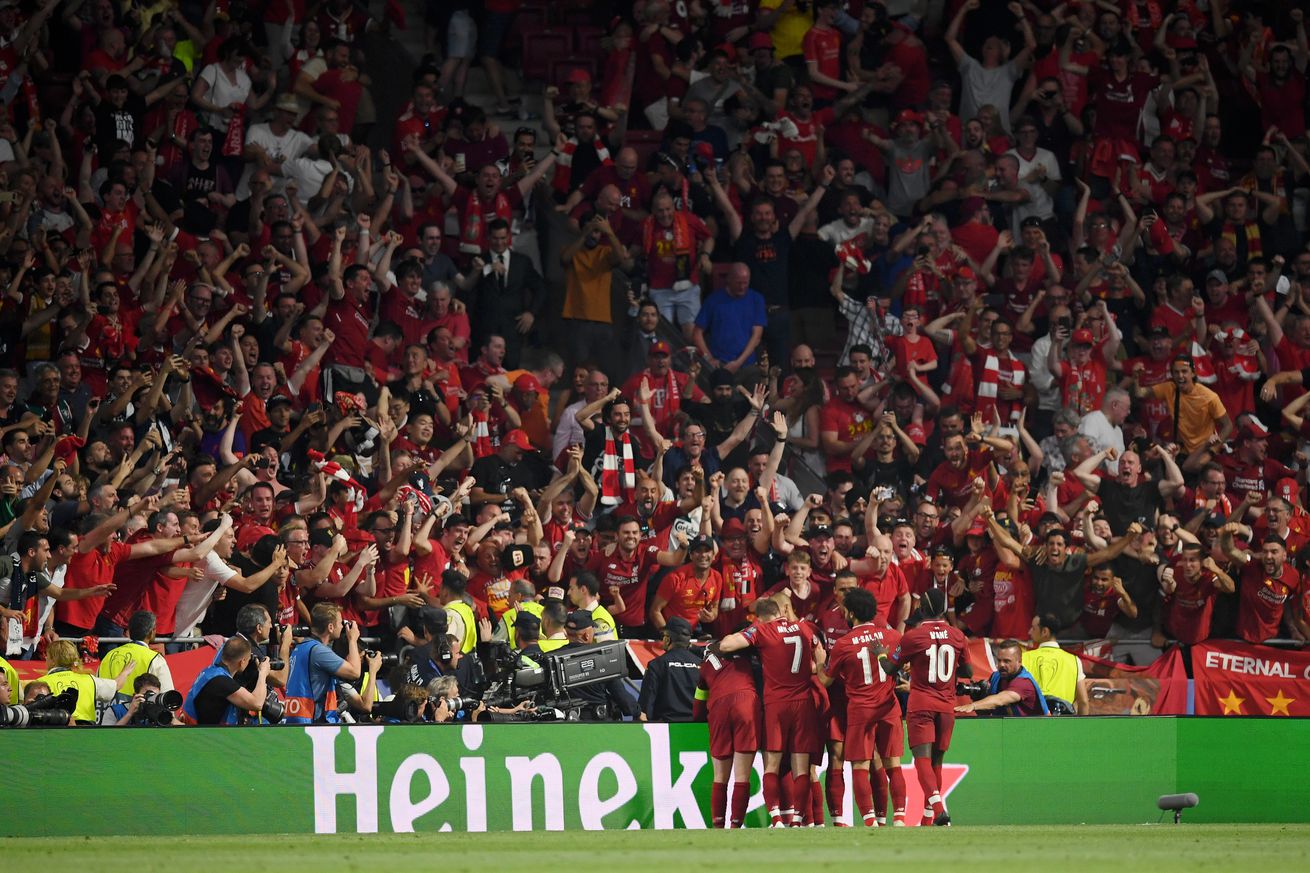 Liverpool’s 2-0 win against Tottenham might not have been a game for the ages, but the Reds can afford to be a little dull sometimes

Was it the greatest European Cup final of all time? No. But did it, of all the showpiece finals of the biggest competition of them all, have the shortest time between “Right, we’re off” and “Wait, what?” Very possibly. So, thanks to Sadio Mane and Moussa Sissoko for that.

That penalty had two effects. The first was to create a million and one conversations about whether it was right or wrong; conversations that all, inevitably, foundered on the fact that nobody really understands the handball rule and in any case it doesn’t make sense. You might think you do, but you are wrong.

It is, like the true name of God or the largest number in the world, unknowable. All we can do is guess, with heart and head, and hope to be right more often than not.

That said, without getting into the rights and wrongs of the penalty decision, it’s probably worth noting that the “unnatural position” angle does lead to some very strange places. Pointing, for example, is a thing civilians do quite often and footballers do constantly. But it becomes an unnatural thing to be doing when, and only when, a ball is kicked towards the arm.

The second effect — and probably the more important in the grand scheme of things — was that the favourites for the game had the lead in the second minute.

Maybe it was this that did it: that made it into one of those games. Where the early stages last all the way through to the final whistle; where the scene is set but largely unused. Where you wait and you wait and you wait for the game that you wanted. No! The game that you were promised. By the semi-finals and by the occasion. By Gazprom and by heavy metal football. By your own sense of entitlement, dammit. It’s the Champions League final! It’s been a long old season! You deserve two hours of high-octane nonsense.

And then it was over, and it never was.

There are lots of football matches like this. Not all are as big or as important, but it’s a familiar feeling: the whole mysteriously less than the sum of its parts. For something that arouses so much passion, so much commitment, so much feeling in those that follow it, the actual granular stuff of the game can often underwhelm.

At times this can seem like a design flaw, and every now and then the people in charge tweak things in search of a little more entertainment. No backpasses! Golden goals! Wait, that didn’t work. This is terrible. No golden goals!

And flat games can feel awful, if you’re unlucky enough to be invested. Perhaps the worst feeling in football, as a fan, is not the ringing shock that follows we’ve been hammered, but the flat blank nothing of we … we didn’t even turn up. Perhaps that is the real shame, for Spurs: not that they lost, and certainly not that the game was boring, but that the game for so long didn’t seem to contain very much of Tottenham.

In any case, it made for an odd experience: a grand occasion wrapped around a grind of a game. Maybe it was that early lead. Maybe it was the heat, or the three-week break. Or perhaps the obvious lack of fitness of both Roberto Firmino and Harry Kane, so often tone-setter and focal point respectively.

But for the winners, the lack of spectacle works, in an odd sort of way, to refocus the victory onto the team more generally. Where there’s not much game to talk about, it’s the broader sweeps of story that come out. You don’t have to like Liverpool to acknowledge that this trophy is the result of a masterclass in building a big football team and rekindling a big football club.

Liverpool will always be big, of course, but big doesn’t always mean good. Sometimes big teams are Godzilla, sometimes they’re an elephant that’s been at the fermented fruit. We’re not ten years distant from the sacking of Rafa Benitez and the appointment of Roy Hodgson, a moment that was, by the standards of any big club, deeply and hilariously dysfunctional. Fast forward and: record-breaking league season, Champions League trophy, and no obvious reason why things might get immediately worse.

There’s no point pretending that this is some kind of scrappy underdog story, not when the most expensive defender in the history of the game steals the man of the match award from the most expensive goalkeeper. But it’s certainly a story of extreme competence. Owners finding the right manager, scouts finding the right players, coaching making them better. And, as a result, everybody interested in the club having a seriously good time.

We watch the misnamed Champions League for the chaos and delirium of knockout football. But in an odd way, this felt like a league game: a team at the end of a long season, securing their trophy with a tired but tidy performance that never got any messier than it needed to be.

And there’s the difference. Benitez, years ago, needed a barely believable comeback to scrap through to a penalty shootout. Jurgen Klopp, here, needed an early penalty, and that was more or less that. Flawed teams often need to be interesting. Strong ones, serious ones, structurally sound ones … they can afford the flex of being a little dull.